The book "The Essential Gandhi" was Originally written by Mohan Das Karam Chand Gandhi and edited by Louis Fischer. Those of you who do not know anything about Gandhi except that he is the father of Indian Nation, learn some basic things about Gandhi and then read this review (Knowing about Gandhi is a prerequisite only if you want to have a lasting impact of this book on you). If you read the book without any knowledge about Gandhi, you will only learn about the life of a man. It is highly unlikely that you will have a change in your life. If you are one of those who have a fair idea about Gandhi, you can read the book as long as you want to know more about Gandhi and his role in getting Independence for India. By fair idea I mean, you should realize the importance of Gandhi in attaining Independence for India and his virtues. 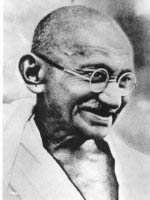 Assuming that you have a fair idea about Gandhi, you might be thinking that Gandhi is an ideal person one should aspire to become. You might be correct to a large extent, but one will never try to become like him because, he/she might be under the impression that Gandhi was born with virtues and have been practising them since the beginning. In fact, it is not true to a large extent. In this book you will know how Gandhi has transformed himself from an ordinary man to an extraordinary personality. More important is you will find that the circumstances under which he grew were no different than any normal man would face. This essential fact inspires you (at least inspired me) that anyone can become like him if sufficient effort is put forth. This point I think justifies the title (THE ESSENTIAL GANDHI) of the book that it covers things that one should essentially know about Gandhi.

Gandhi's views on issues like untouchability are deeply dealt with. Never anywhere Gandhi's views about untouchability were effectively heard. But, in this book they were dealt in great detail with lots of arguments and convincing proofs of why untouchability is sin. Even his co-living with the so called untouchables and the resistance he faced for that is discussed.

His views on religion, nationality, his movements like civil-disobedience, are also clearly shown. Even his opinions on many religions were discussed in deep; a striking balance was maintained among his opinions on different religions to show that he is not in disfavor of any religion (though he mentions the defects of various religions). It should really get appreciation as any imbalance would have had a very unfortunate effect on the image of Gandhi.

You can learn about Gandhi's childhood, his early married life, his realization and transition in South Africa, and his ways of approach towards attaining Independence in India. His childhood was well presented that a normal child can aspire to become Gandhi.

“I felt that if I demanded rights as a British citizen, it was also my duty as such to participate in the defense of the British Empire."

The reference to himself as a British citizen itself tells that it was not the sheer patriotism that led him towards Indian independence movement. You will know what other strong reasons that led him towards it. Throughout the book you will come across his different views of life and humanity. His aim is not to become politically free, but to attain social coherence. Only his desire for humanity drove him towards national movement, but neither political reasons nor patriotism could do it. Indeed we can say that national movement was benefited by him only due to the above reasons. The Author did a great job in imbibing the above thoughts into the reader without questioning. Had the British treated Indians equally along with them (except ruling), I am damn sure that Gandhi would not have got into the movement like any other patriotic. At least that is what I figured from the book.

“Brute force will avail against brute force only when it is proved that darkness can dispel darkness."

This shows how strongly Gandhi disfavoured violence. The book did a fantastic job in showing the Gandhi's principles like non-violence with exemplary contexts. They will just mesmerize you and you may even become a strong follower. At the same time one can find faults in arguments as to whether they are practically possible or not, but since every principle has been put forth with practical situations happened one can indeed get somehow convinced by the principles.

The book has been majorly dealt in two parts THE MAN and THE MAHATMA. But an abrupt change from THE MAN to THE MAHATMA is not well justified. It indeed is a bad division as change is not a sudden transition, but a gradual one. THE MAN includes his childhood, married life and so on till his victory in South Africa against the ill-treatment of the Indians. THE MAHATMA includes exclusively the rest of his life in India. So, the division may be justified on a weak point that he became Mahatma among the Indians and was just considered a good man till that point.

“A foreigner once asked Gandhi: "How is your family?"]
All of India is my family [Gandhi replied.]"

The relations among the family members of Gandhi and himself were not much described. Only Gandhi's taking Brahmacharya and leaving his family to its fate(of course they later joined into his ashrama) were mentioned. Still with the help of few situations occurred in South Africa he tried to give a view that most often his wife was disappointed with Gandhi, but was later convinced by Gandhi that it was indeed for a good cause. Even Gandhi's views about his children are mentioned in the later parts of the book, but nowhere in the book is mentioned anything about real incidents happened among Gandhi's family members except in South Africa which limited us not to know about how he behaved with his family. Had this been mentioned it would have been more effective as he would have resemble as a common man quite more effectively.

The personal experiences of Gandhi during his transition from normal man to Brahmachari are not mentioned. If they are mentioned it would have been helpful to the readers who might want to follow his path, but face problems while practising them. I am mentioning this issue in particular because if one has to follow Brahmacharya after marriage, he/she will have to face resistance from society as well as from family. So, one should be able to convince the family members about their decision. So, it would have been helpful if, how Gandhi convinced his wife about his decision of taking Brahmacharya is presented.

The main reasons for hatred of white men in South Africa and in India towards Indians are described well. One would never believe if being insanitary was one of the main reasons. You will also know more interesting reasons which are well described in this book. An entirely different view of white men about Indians is presented in the words of Gandhi.

Through out the book need for self production is emphasized. He himself was a great follower of that. Banning of certain foreign goods was very well justified that, even those who were affected by it were satisfied and showed no signs of anger towards Gandhi. The book covers a good deal of advice given by Gandhi to Negroes. It contains mostly of non-cooperation. Even though matters regarding spirituality are well addressed, the explanations are too much for an ordinary reader to digest. One might even loose interest while reading the first few chapters after his permanent return to India because his arguments are supported philosophically by comparing certain hypothetical situations. But if anyone can put in a deep interest and can be patient enough to read them, they will really change their opinions if they were of opposite opinions.

Towards the end known facts about Gandhi in national movement are mentioned. His methods against British are well known and have been described in these later parts of the book. The book will continue till his death. Anyway, it's a good book to read. Even if small change is observed in the reader by reading this book, which I am sure will be, it has indeed done a good job.

Mahatma Gandhi And My Mongolian Students

Mahatma Gandhi,our father of the nation is awe inspiring as not only Indians but also foreigners are interested to know more about him. In this essay, I would like to discuss about the interest the great hero has created among my Mongolian students.