The National Cadet Corps is the Indian military cadet corps comprising of studenst from schools and colleges. It is an organistaion where studenst can voluntarily join to learn the skills to become a soldier in the future. The training imparted in NCC is also allows a cadet to see the Army, Naval and Air Force lives very closely. Neither one needs to pay any membership fee to be a part of this largest youth organisation in India nor is a cadet who has been trained in the NCC liable to the Government. However, the NCC cadets enjoy an advantage over people without the NCC training in various sectors and industries across India. The cadets are provided basic military training through drill and various camps organised throughout the country every year. 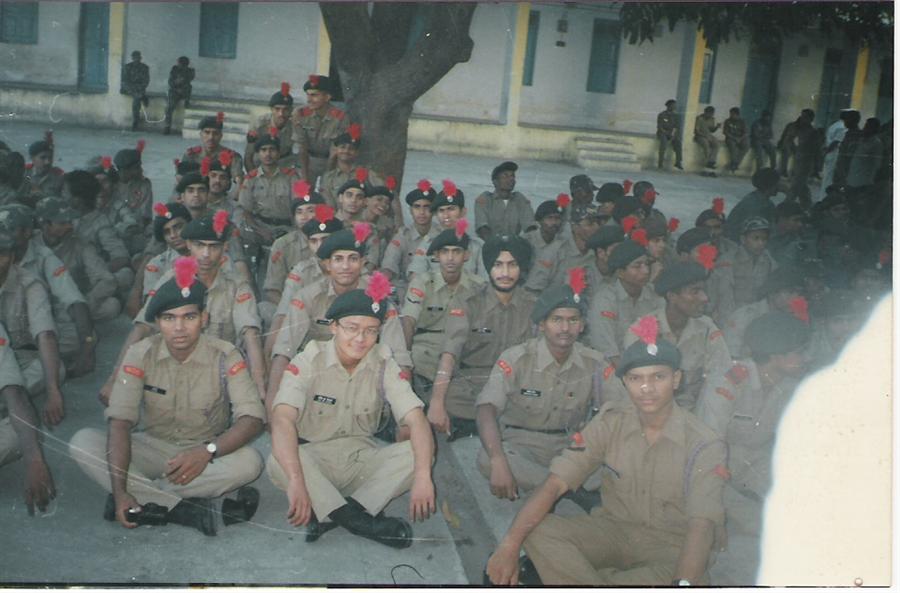 History
The British Government intending to groom efficient officers for their security forces decided to impart Army Training to studenst of Indian Universities. To enroll the students for the organisation they started University Training Corps(UTC) which later during 1925 was changed to University Officers Training Corps. However, this organisation had its limited sphere and only a limited number of studenst took part in its activities.

During the Second World War it was noticed that the University Officers Training Corps could not fulfil its mission in getting the trainees to work as soldiers in fighting against the enemies. Considering this drawback and to impart training to youth in future, the Governement of India apointed a National Cadet Corps Committee during 1946 under the chairmanship of Pandit Hradaya Nath Kunjru. After studying the trend and army trainings given to the youth in the developing countries during March 1947 the committee submitted a detailed report to the Government of India. The Governemt accepted the changes and recommendations of the committee and prepared a bill that was passed in April 1948 by the Parliament. The act was called the NCC Act under which NCC was launched in schools and colleges.
To widen the scope of NCC training, a girls division in 1949, Air Wing in 1952 and Navy Wing in 1952 were introduced.

During 1960, NCC Rifles was established to impart NCC training to maximum number of students and after 1962 NCC was made compulsory for all healthy studenst of colleges. The compulsion was introduced after the Indo-China War in 1962 which had left India with many questions and doubts regarding the security of the nation. Since there was a wide variation between dress, number of cadets in a company between NCC and NCC Rifles, the two organisations were merged on 2 April 1964 and mandatory training of students abolished in 1968.

National Cadet Corps Directorate was established in the Ministry of Defence during 1948 to co-ordinate and direct activities of NCC. An Army officer of the rank of Colonel was appointed as the Director of NCC. Later with the expansion of NCC the rank of Director was upgraded to Brigadier in 1954 and Major General in 1961. The rank of Director NCC was changed to Director General in 1982 and the rank of the Director General was upgraded again to Lt. General for the last time. The Director General is responsible for the functioning of NCC in the country through the NCC Headquarters situated in New Delhi. The DG at the NCC Headquarters is assisted by the Additional DG, one Major General from the Army, and other the Rear Admiral from the Navy or the Air Vice Marshal from the Air Force. There are 5 Deputy DGs of the rank of Brigadier and equivalent , three Brigadier and one Commodore/Air Commodore and one civilian officer.

Functioning of NCC
There are 16 Directorates representing all states and union territories in India. The Directorates are headed by an officer of the rank of Brigadier or equivalent and designated as Deputy Director General NCC. Each of the NCC Directorate Headquarter controls 2 to 14 Group Headquarters, headed by an officer of the rank of Colonel or equivalent. Each NCC Group Headquarters control 5-7 units(Bns) commanded by Lt. Colonel/Major or equivalent. In all there are 91 Group Headquarters in the country who exercise control over a network of 658 Army Wing Units(including technical and girls unit), 58 Naval Wing Units and 58 Air Squadrons. In addition, the NCC has two training establishments :
1) Officers Training School(OTS) in Kamptee(Maharashtra)
2) Women Officers Training School(WOTS) in Gwalior(Madhya Pradesh)
The professors and teachers from colleges and schools are trained in these training schools to impart training to the cadets in shools and colleges as Associate NCC Officers(ANOs).

The NCC functions under the overall supervision of Central Advisory Committee. The constitution of the committee is as follows:
1) Defence Minister - Chairman
2) Defence Secretary - Ex-Officio Member
3) Secretary Education - Ex-Officio Member
4) Three Services Chief - Ex-Officio Member
5) Financial Advisor Defence Services - Ex-Officio Member
6) 2 Members of Lok Sabha
7) 1 Member of Rajya Sabha
8) 5 Non Official Members nominated by the Government
The Defence Secretary, Ministry of Defence controls all the functions of NCC and is responsible to the Government of India for efficient fucnctioning of NCC.
Today the NCC has achieved tremendous popularity in India and the training syllabus of NCC which also includes Social Service and Adventure Training and Ecology is revised from time to time to make the syllabus more relevant according to the contemporary times.

Total Strength
The total number of National Cadet Corps (NCC) cadets enrolled in the country at present is about 12 lacs with about 9 lakhs in the Army Wing. The NCC's presence extends to 606 districts of the country covering 8,454 schools and 5,377 colleges.

NCC Day
It is established on 4th Sunday of November every year.

Republic Day Camp(RDC)
This camp is held every year in the month of January from 5 to 29 January at the Garrison Parade Ground, Delhi Cantt. During the camp the cadets participate in the Republic Day Parade and Prime Minister's Rally.

Independence Day Camp(IDC)
This camp is held every year at the national level in the month of August. Sportsmen from all the NCC Directorates participate in the camp. The first NCC Games were held in 1997. 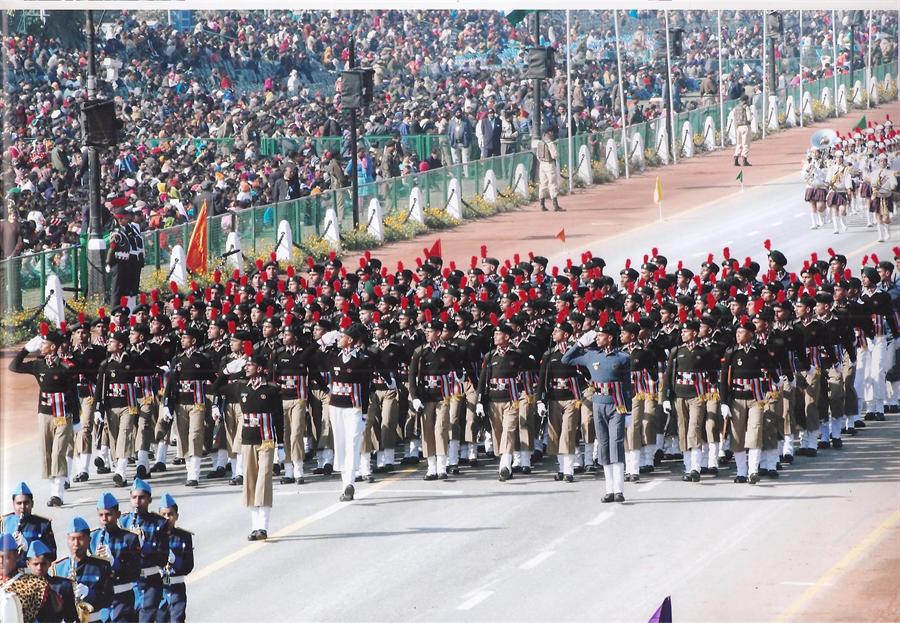 Aims of National Cadet Corps
1) To develop qualities of character, courage, comradeship, discipline, leadership, secular outlook, spirit of adventure, sportsmanship, and selfless service among the youth to make them useful citizens.
2) To create human resources which is organised, trained and motivated to provide leadership in all walks of life and be available for the service of the nation.
3) To create suitable environment to motivate the youth to take up a career in the Armed Forces.


The Four Cardinals of Discipline in NCC


NCC Flag
NCC is a tri-service organisation, therefore it is divided into three parts/three strips. In this, a red strip is on the right side, in the middle navy blue strip and on the left of it is sky blue strip. The red colour represents army, the latter two represent Navy and Air Force respectively. The circle in the middle made up of 16 petals represents 16 Directorates. The letters NCC are written inside the circle. The bottom of the circle denotes the motto of the youth organisation, 'Ekata Aur Anushasan' is written in Hindi which means 'Unity and Discipline.'

Administration of NCC
The NCC headquarters or Directorate General of NCC is situated at New Delhi. The Headquarter is commanded by the Director General NCC who is of the rank of Lt. General. He is directly responsible to the Government of India, Ministry of Defence on all matters pertaining to NCC.
Under the Director General NCC there are Deputy Director Generals NCC who are of a Brigadier or equivalent rank and their headquarters are situated in the capital of a state or in cities of some states.
In the states there are Group Commanders NCC under Deputy Diirector General NCC. They are of Colonel rank. Under each Group Commander there are 5-7 NCC Battalians which are commanded by Lt. Colonels. Each Battalion consists of companies which are commanded by the Associate NCC Officer(ANO) of the rank of leutienent to major.

Divisions and Training
The training of NCC cadets has been divided into 3 distinct divisions.
1) Senior Division
In this division students of college/university of the age group of 15-26 years undergo training. This training is for 3 years. The senior division is further divided into three wings: Army, Air Force and Navy Wings.

2) Junior Division
In the Junior Divisioon studenst of 13 to 16.5 years of age studying in secondary school are enrolled. Their training is for 2 years. In the junior division also there are Army, Air Force and Navy Wings.

3) Girls Division
In this division there are Senior and Junior Wings.
The Senior Division have companies of Signal, Medical and Nursing. Training in the Senior Division is for 3 years, whereas cadets get trained for 2 years in the Junior Division similar to the boys.


Promotion of NCC Cadets
In NCC, students are enrolled as cadets. Thereafter, they are promoted to various ranks in NCC. The conditions under which an cadet can be promoted are defined below.
I - Lance Corporal(L/Cpl)
To become a Lance Corporal a cadet must have undergone 3 months of training in NCC, must have minimum 75% attendance on parade and should pass the basic tests of drill, map reading and field crafts.

II - Corporal(Cpl)
To become a Corporal a cadet must have worked for 6 months as a Lance Corporal and must pass the Weapon Training test.

III-Sergeant
To become a sergeant a cadet must have worked at least 6 months as a Corporal and must be in the second year of service in NCC.

IV - Under Officer
An Under Officer must have worked as a Sergeant for at least 6 months and must pass the 'B' Certificate Examination.

Adventure Training
Adventure training is conducted for cadets to develop leadership skills, strength and self confidence.

Community Development
As part of a cadet's growing up process, the NCC takes up a large number of community development programmes. Disaster Management, Tree Plantation and Blood Donation are some of the programmes NCC cadets take part in.

Youth Exchange Programme
The programme helps to promote international peace and understanding through cadets from different countries coming together. 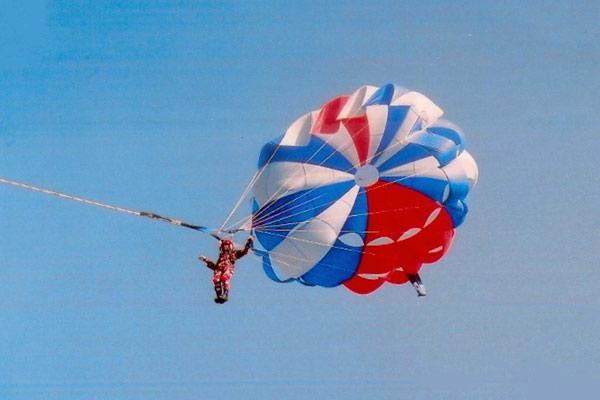 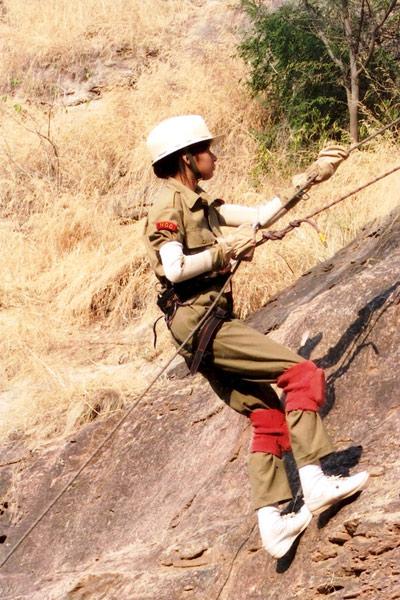 Need to procure a picture of my mother who attended the Republic Day parade in 1960 from NCC 4th Rajasthan Battalion from Ajmer. We only have her certificate but no picture. Please let me know how I can get one. She is getting old and it would be great to refresh her memory. Please help.