THE SECRET BEHIND NURSERY RHYMES

We've all sung them. I don't think any human being has gone through life without having chanted a couple of nursery rhymes. When we were small, our parents taught them to us, we and our friends danced and played to the tune of 'ring-a-ring-o-roses', and many of us who have got married and have children of our own have sung them to the younger generation. But how many of us know where these seemingly harmless rhymes came from? What do they mean? Who wrote them? In the following article, I've included the history behind some of these famous poems and hope you'll enjoy learning the secret behind the nursery rhymes.

Nursery rhymes came into existence during the 15th and 16th century, when writers and journalists wanted to ridicule or discuss events and actions that royalty engaged in, without the fear of recognition. It was a capital offence to mock the Queen and other high-standing figures and would guarantee the writer severe punishment, if not the death penalty.

The most famous nursery rhyme, in my opinion has to be the one mentioned in the first paragraph. Below are the nursery rhymes themselves followed by theories regarding their composition and background. However, don't let some of the explanations deter you from continuing to recite these rhymes. After all, we are what we are because of history. 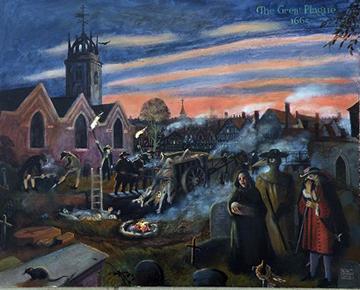 The Bubonic Plague in London, 1665

At first sight, it seems innocent enough. You could imagine children playing, with a wreath of roses around their heads or carrying baskets of flowers, merrily skipping along. If only it were that simple.
This rhyme came into being around the time of the great Bubonic Plague in London (1665). An estimated 1,00,000 people (20% of London's population) were killed. In spite of the destructive force of this epidemic, it was not as severe as the plague that had hit England between 1347 and 1353, which began in Europe and then spread throughout the world, killing over 75 million people!

Plague doctors would roam the streets, diagnose victims and several efforts were taken by them. However, panic started to spread and in fear of contagion, the dead were hastily buried in pits that weren't big enough. The death toll of the plague rose from 1000 people per week to 7000 people per week!
Symptoms of the plague included a red rash in the shape of a ring (the title of the rhyme). People carried sweet smelling herbs (pocketful of posies) and other substances like pepper and frankincense were burnt to try and ward off the infection, which they believed was transmitted through foul smells. Fires were kept burning day and night in the hope that the air could be cleansed of the infection and even corpses were burnt in an effort to rid the city of this terrible disease ("Ashes, Ashes"). "A-tishoo! A-tishoo!" refers to sneezing which was another symptom of the plague. The plague came to a halt in 1666 when the great Fire of London killed the rats that had brought in the disease. 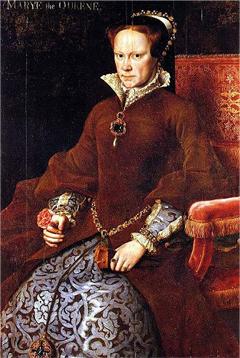 During the reign of Queen Mary I (daughter of King Henry VIII) and her husband King Philip of Spain, there was a nationwide persecution of all who adhered to Protestantism, the queen being a Catholic. Her violence in dealing with the Protestants led to her being nicknamed 'Bloody Mary'. In the rhyme, 'farmer's wife' refers to the queen herself because of the massive estates she and her husband owned. The three blind mice were three Protestant noblemen who were accused and convicted of plotting against the queen. They were burnt at the stake. 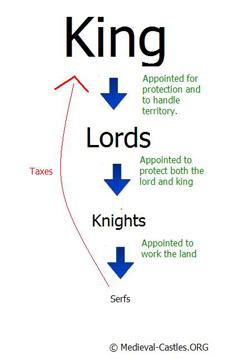 Baa Baa Black Sheep,
Have you any wool?
Yes, Sir, Yes Sir,
Three bags full,
One for my master
One for my dame,
And one for the little boy,
Who lives down the lane.

This poem refers to the unjust system of taxes in the Middle Ages. Feudalism was rampant during this time, with the King, feudal lords and peasants (serfs) being the main divisions of the society. The peasant farmer was left with just a third of his earnings after he had paid taxes to the 'master' (the king) and the 'dame' (the nobility who owned the land). The 'little boy' refers to the poor farmer himself. 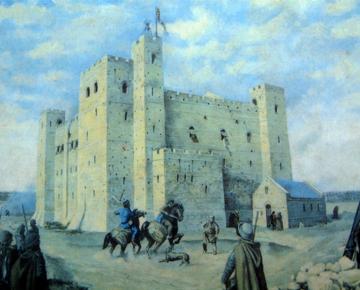 While the term 'Humpty Dumpty' was used in 15th century England to describe someone who was obese, the rhyme itself does not refer to any such person sitting on a wall. Humpty Dumpty was, in fact, a large cannon used in the English Civil War (between 1642 and 1649) during the Siege of Colchester (13th of June 1648 to 27th of August 1648). The town of Colchester was fortified by the Royalists and under siege by the Parliamentarians. This town had a strong wall to protect the castle and many churches that were within. St. Mary's Church stood adjacent to the wall and the cannon Humpty Dumpty was placed strategically on the roof of the church. A shot from the Parliamentarians' cannon damaged the wall beneath Humpty Dumpty causing it to come tumbling down. This explains the opening lines of the rhyme. The Royalists or Cavaliers (all the King's horses and all the King's men) tried to lift the cannon onto another part of the wall, but because of its extreme weight, they 'couldn't put Humpty together again!' 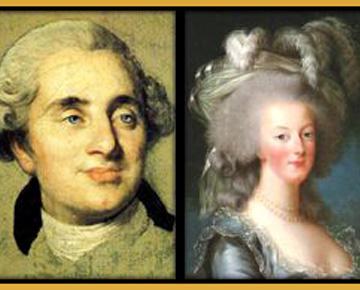 Jack and Jill went up the hill to fetch a pail of water
Jack fell down and broke his crown
And Jill came tumbling after.

Up Jack got, and home did trot
As fast as he could caper
He went to bed and bound his head
With vinegar and brown paper.

The nursery rhyme 'Jack and Jill' has its roots in French history. 'Jack' refers to King Louis XVI who was beheaded (Jack fell down and broke his crown) during the Reign of Terror in 1793. The poem was first published in 1795 and hence found to be related to this part of history. 'Jill' was the king's wife Queen Marie Antoinette who was beheaded after her husband (and Jill came tumbling after). The next verse of the poem never happened and was only included to be acceptable for young children. 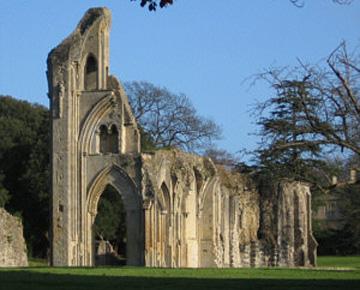 Little Jack Horner sat in the corner
Eating his Christmas pie,
He put in his thumb and pulled out a plum
And said "What a good boy am I!"

This nursery rhyme was first published in 1725. Jack Horner was the Steward to Richard Whiting (1461-1539), the Bishop of Glastonbury, which was the largest and wealthiest Abbey in England. The Steward's responsibilities included managing the household, collecting taxes and keeping accounts. This Benedictine monastery owned a large amount of land in Somerset and when King Henry VIII broke away from the Catholic Church, he and his chief minister Thomas Cromwell started to dissolve all the monasteries in England with the aim of looting all the gold and silver and seizing all the land owned by the monasteries. The Abbey of Glastonbury was finally seized in 1539.

There was a rumour that the Bishop tried to bribe the King, through his Steward by sending twelve title deeds of different English estates. These papers were hidden in a pie, to keep thieves away, but the Steward stole the deeds to the manor of 'Mells' (the 'plum' he pulled out from his 'Christmas pie'). The remaining eleven deeds were given to the Crown, but was a futile act on part of the Bishop, because he was convicted of treason and a jury, which included his steward sentenced him to the gallows (where prisoners are hanged). It is not known exactly whether Horner stole the deed or was given it as a gift later on for his help in convicting the Bishop, but his descendants have occupied that manor of Mells till the 20th century. 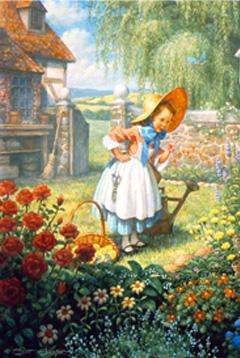 Mary Mary quite contrary,
How does your garden grow?
With silver bells and cockle shells
And pretty maids all in a row.

The history behind this poem is probably the most shocking one for me. It dates back to the reign of Queen Mary I of Scots (Bloody Mary, as explained earlier). Her 'garden' refers to the graveyards where the Protestants she had executed were buried. 'Silver Bells' were instruments of torture which crushed the thumb between two hard surfaces with the tightening of screws. 'Cockle shells' were also weapons of torture. The 'maids all in a row' refer to a new device to behead people – the guillotine (use of the traditional axe was troublesome and sometimes required the person to be struck a dozen times before being beheaded). As a result, the 'Maiden' , which was already being used in England was constructed in Scotland under the leadership of Lord Morton, regent of Scotland during the minority of James VI. Ironically, Lord Morton himself was the first person to experience this new system of punishment, after he fell from the royalty's favour. It is interesting to know that while the number of executions during the reign of 'Bloody Mary' was about three hundred, it was not nearly as bloody as the reign of her father King Henry VIII, who ordered thousands of executions.

The article above is based on historical fact and is meant solely for reading pleasure. It is not intended to hurt the sentiments of any person, living or dead.

In this article, you will find the nursery rhyme, 'Rain, rain! Come again!' as it is given in rhymes and songs book of kindergarten. But it will be followed by some explanation, activities, conversation and questions asked by kids regarding the rain. You can use one or all the suggestions listed here to develop your child's personality.

In this article, I will explain some of the Best Nursery / Play schools for toddlers in Delhi and some of its important prospectus, facilities and details of admission. Playschool is very vital for all children's to set a target goal in creativity and achieving them on timely basis Every playschool aim at developing skills and creativity amongst all your loved ones.

In this article, I will explain some of the Best play school for toddlers in Chennai and some of its important prospectus, facilities and details of admission. Playschool is very essential to all kids ranging from 1.8 years to 5 years. Your loved ones will be in a calm and good environment spending nearly 4-5 hours independently with the supervision of teachers, assistants and helpers.