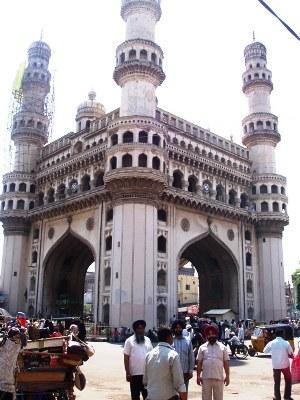 Charminar is an important tourist spot for visitors

I originally belong to Punjab but have been staying in Hyderabad for the last 32 years. I am the only member of my family living in Hyderabad and my most of the relations stay in Punjab. So some or the other member of my family visits me in Hyderabad and I take them to places of tourist interest in and around Hyderabad. One of the very important places of tourist interest in Hyderabad is Charminar. There are many pearl dealers shops located near Charminar. That is one of the reasons that the tourists like to visit this place. They city is known as city of Charminar and also as city of pearls for this reason. My nephew from Punjab visited me along with two his friends, I took them to Charminar first since they were also interested in buying pearls for their wives.

Charminar is a famous historical monument in Hyderabad. It has a four hundred years old history. The tour of city is not complete unless one visits Charminar. There is at least one historical monument in any city of the world by which it is commonly known. It is the same as we think of Amritsar the city of Golden temple. We know New York for its Statute of Liberty. We think of Moscow for its Kremlin square. Charminar was built by Sultan Muhammad Quli Qutub Shah in 1591. Sultan Quli Qutub Shah was the fifth ruler of the Qutub Shahi dynasty. It was when the ruler of Hyderabad Quli Qutub Shah sifted his capital from Golkonda to Hyderabad. It is said that the Sultan build it to commemorate the elimination of epidemic of plague by which the city was infected. It is believed that Quli Qutub Shah offered the following prayer before he built a mosque at this site: " Oh Allah, bestow unto this city peace and prosperity. Let millions of men of all castes, creeds and religions make it their abode, like fish in the water."

Charminar, or the four minarets is a mammoth structure of granite, lime and mortar

Charminar is gigantic monument with four minarets on its four corners. Granite, lime, mortar and pulverised marble were used in construction of Charminar. Each side of the Charminar measures about 20 metres. There is a tall and pointed minaret on all its four corners. The height of the minarets is 48.7 metres from the ground level. There are 149 winding steps rising from inside the minar which take the visitors to the top floor. The visitors can have a panoramic view of the city from the top of the Charminar. A legend is popular about the Charminar that there was an underground tunnel connecting it to the palace at Golkonda fort. It is reported that the Britishers used the building to store opium and liquor. It is also reported that during Mughal rule the south western minaret was destroyed by lightening but was immediately repaired at the cost of Rs.60,000 in 1824. When the new city of Secunderabad was not developed, Charminar is said to be in the centre of the city. It is the architectural elegance of the period of Qutub Shahi rulers of Hyderabad. It became so famous with the passage of time that it is used as a brand name of the city. Some famous consumer goods like the Charminar cigarettes are named after it.

There are famous shopping centres around Charminar known as Laad Bazaar and Pather Gatti. Laad Bazaar or Chudi bazaar is famous for its exquisite bangles and arts and craft made from the black metal. There are a lot of pearl shops on the road leading to the Charminar. Pearls of Hyderabad have a very long history. There are two types of pearls sold in the market. They are the real pearls and cultured pearls. The pearls are made into different shapes and sizes. The drilling in the pearls is done either horizontally or vertically. Highly skilled artisans are engaged by the pearl dealers for this purpose. Once the pearls are ready, they are graded according the sheen, glaze, size, lustre and uniformity. Several types of ornaments like bracelets, kundan sets, enamelled sets, seven strand pearl sets, lacchas, moon shaped ear rings (Chand balis), chain sets in the form of ropes, mat type of chains and the rings for fingers, waist belts etc are made from pearls. Some famous pearl dealers of Hyderabad and Secunderabad are Mangatrai, Kedarnathji Motiwale and Jagadamba Pearls.

Five popular tourist spots in the Medak district of Telangana

Have you been to Singur Dam in Medak district near Hyderabad? Have you seen popular attractions like Medak Church, Medak Fort, Durga Bhavani Temple and Pocharam Reservoir? If not, then learn about these tourist hotspots in and around Medak district of Telangana through this article.