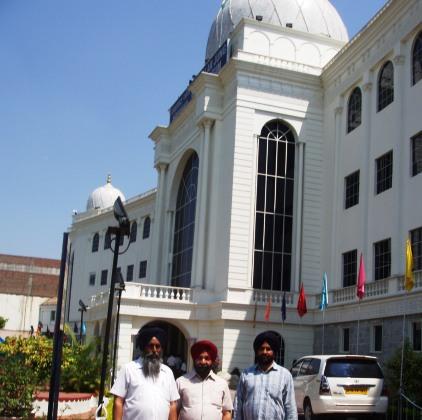 Hyderabad in the south of India is the capital city of Andhra Pradesh state. Hyderabad is also known as twin cities consisting of areas of the old Hyderabad city and the cantonment city of Secunderabad. Hyderabad has become a historical city because of its several monuments like Charminar, Golconda fort, Qutub Shahi tombs, Paigah tombs, Chowmohalla Palace, Asmangarh Palace, Faluknama Palace, Taramati Baradri, Purani Haveli, King Kothi Palace, Paigah mosque (Spanish Mosque), Bella Vista. There are famous museums like the Salarjung Museum, AP State archaeological museum and Birla Museum. The city has historical mosques like the Mecca Masjid, Juma Masjid and the Shahi Masjid. There are several historical lakes by the names Osman Sagar, Durgam Cheruvu (lake), Himayat Sagar, Hussain Sagar (Tank Bund) and Shamirpet lake in and around the city.

Salarjung Museum, the historical collection of repository of art by Salar Jung III

Anyone visiting Hyderabad will be first taken to Sarlarjung museum, the famous and mammoth repository of the one man's rare collections from all over Europe, Asian and far eastern countries of the world. This is given the name as one man's collections because the major part of these exquisite collections was acquired by Mir Yousuf Ali Khan who was popularly known as Salar Jung III. A few of the items kept in the museum were inherited by Salar Jung from his father and grandfather. Therefore the museum was named after him.

Salar Jung III' grandfather was a great connoisseur of art and the "Veiled Rebecca", the enchanting marble statue was bought by him from Rome in 1876. This is one of the most important possessions of the Salarjung museum now and is a centre of attraction by the tourists. After Salar Jung III left the post of the prime minister in the Nizam shahi government in 1914, he devoted his entire life in collection of treasure of rare art and literature wherever he found them in the world. Such was his passion and love for art. Art was his love and mate and he died bachelor at the age of 60 on 2nd March 1949. Since there were no direct descendants of Salar Jung III, the government of India took over the administration of Salar Jung Estate which was later turned into a museum by the name Salarjung Museum in December 1951 and was declared open to the public by the then Prime Minister of India, Jawaharlal Nehru. In 1961, the government of India declared the museum and its library as an institution of national importance through a parliamentary act. Later the administration of the museum was transferred to an autonomous board with the governor of Andhra Pradesh as its chairman. The museum was shifted to its present building in the year 1968.

Salarjung Museum is ideally located on the southern banks of the Musi river. It is very near to other historical places like Charminar, Juma masjid, High court, the State Central Library, Osmania General Hospital and Central Bus Stand at Afzalgunj. The museum is easily approachable by road and train. Kachiguda and Nampally railway stations are just four kilometres away from Salarjung museum. Afzal Gunj bus stand from where buses frequently ply to all parts of the city is just located at a walking distance from the museum.

Holidays, timings and entrance ticket for the Salarjung Museum

The working hours of the museum are from 10 a.m. to 5 a.m. without interruption.

The entrance ticket to the museum is Rs.10 per person for general public. 50% concession is given to the students with identity cards, defence personnel in uniform, organised kisan parties and children below 12 years. During Children's week from November 14, the school children up to 12 years of age accompanied by the teachers are allowed free of charge entry. The entrance ticket for foreign nationals is Rs.150.

Other facilties and information for the tourists visiting Salarjung Museum

• The cloak room at the entrance near the booking counter is meant for the visitors to deposit their personal belongings like the brief cases, hand bags, cameras, umbrellas etc free of cost.

• Water coolers are installed at important junctions of the three buildings.

• A vegetarian cafeteria is run by Andhra Pradesh Tourism Development Corporation (APTDC) near room No.11 to provide meals, snacks, tea and soft drinks during the museum hours.

• A free guide service is available six times every day at the following times:

• Reading room equipped with all the local daily papers and magazines in Hindi, English, Telugu and Urdu and even some foreign magazines is located on the second floor for the benefit of the visitors.

• There are facilties for research scholars since the museum library has a rich collection of printed books in various subjects. There is also a rich collection of thousands of manuscripts in Persian, Arabic and Urdu languages. Scholars are permitted to use the library on request by obtaining passes from the reception counter. Photography is also allowed on a nominal payment for certain specific purposes.

• Smoking is not allowed in the galleries.

Some other places of tourist interest in Hyderabad

Tourist guide to Hyderabad, the city of charminar pearls

Biryani - Musings of a Hyderabadi

Revealing the secrets behind the taste of biryani. Also, know about the places where you get authentic biryani in Hyderabad.

Are you looking for information Charminar in Hyderabad? If so, read this article about Charminar- Introduction, History and Construction. The best place to see in India, tourist hotspot in India. Historical places in India, the best tourist place in Hyderabad, Andhra.