Minor Santhome Basilica is one the important tourist attraction for those who visit Chennai. It is not only a tourist attraction but also a pilgrimage to many. Pilgrimage had existed and always found importance in mankind from the days when mankind started believing in God or started having faith. Every religion has its own pilgrimage journey. Even in migration processes this pilgrimage has found great importance. Mostly pilgrimage involves a place of historic importance. Also pilgrimage is not confined to religion but rather secular in nature. Faith does not have boundaries. We shall see about one such pilgrimage place not known to many but has its own importance over thousands of years throughout the world. I have tried to provide the summary of various facts and legends of the church in this article.

Santhome church is the only church whose history goes back even before 100 A.D. The history of the church is entwined with the history of Madras now known as Chennai. Santhome church is in the south of the Chennai city at a place called Mylapore. St. Thomas is the apostle who was known to be with Jesus. He is one of the twelve members whom Jesus had entrusted to spread his word. One can find excerpts in bible about St.Thomas in the Gospel of St.John in the bible. St. Thomas is also referred to as Didymus in the bible. The church has an underground tomb where the remains of St.Thomas is layed. The church has been recently renovated to have two chapels, one above the ground is the main chapel and one below the ground is the tomb chapel. Also there is a museum which has the valuable artifacts which includes the spear or lance head that killed St. Thomas.

I have showcased some photographs personally taken at the cathedral in the article. 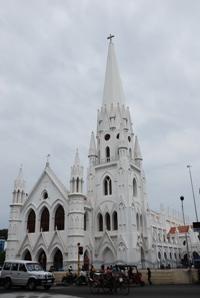 Santhome church is one of the three churches in the world that are built over the tomb of apostles. St. Peter's basilica in Rome, St. James basilica in Galicia and St. Thomas Basilica in Chennai also known as Minor Santhome basilica. Santhome shrine was built around 72 A.D on a small scale on the tomb of St. Thomas. The church had its ups and downs during her tenure and now she stands high in the southern coast of Chennai. The Santhome church has found its mention in various journals and excerpts of foreign travelers who had visited Chennai from time to time.
The part of Chennai known as Mylapore today has been addressed by Greeks in their maps and journals as Maliarpha. This is claimed by Medleycott the famous writer who wrote the book "India and the apostle Thomas". Before that the place was called to be calamina. Roman mythologists have mentioned St.Thomas and calamina in India in the report of martyrdom of St.Thomas.

The actual church of Santhome was said to be built by St. Thomas himself. St. Thomas had performed numerous miracles while traversing in India. There is a legend that was a huge log that washed ashore and blocked the river mouth causing flood on banks. The king asked for help from St. Thomas after hearing about his divine power. St. Thomas is said to have prayed and touched the log, he asked the kings men to remove the log and the men pulled it out without any difficulty. The king gifted St. Thomas the legendary log to build a church at that spot. After many centuries the church suffered its ruins. There were many benevolent travelers and philanthropists who renovated the church. During sixth and eighth century pilgrims had visited the church and have awed over the design and construction. World renowned traveler Marcapolo has mentioned the church in his journal.

In the sixteenth century the church was found in its ruins, the Portuguese rebuilt the church at a small scale. Later in 1893 the bishop of Mylapore demolished the structure and built the church that stands today. Some of the historical events when the tomb was opened are given below.
The tomb of St. Thomas was opened a five times in history.

St. Thomas was one of the twelve legendary apostles who had been with Jesus. Each apostle except for one had taken the assignment of spreading the word of Jesus at different parts of the world. St. Thomas was the apostle who had taken up as a missionary to India and china. St. Thomas is one of the apostle who doubted Jesus to have risen from death and asked for proof. After St.Thomas touched the wounds of Jesus he repented for his doubts and started to believe in Jesus and never turned back since then. He is known to be the only apostle to have seen and touched Jesus after he had risen from death. Also he endured the same fate as Jesus. It is said that he acquired the language skills for communication in these countries by means of divine intervention. Also during that time India was well known to most civilizations such as Greek, Egyptians, Arabs, Romans, etc. 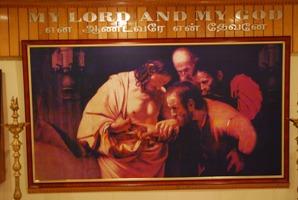 St. Thomas is first said to have landed in Kerala around the year 52 A.D during Chera Regime. Even today Kerala, orthodox Christians follow the ideals and Christian principles by passing them from generation to generation in families by St.Thomas. They consider him to be their great grandfather. At Kerala he had build seven and half churches. The half church is a church where the work was left half way by St.Thomas. His impact with people in Kerala is considered to be huge. It is considered that Cheras in Kerala supported him greatly. After being in Kerala St. Thomas had travelled both northern and southern India. It is said that he had travelled even to china. Even today the Santhome has many migrated Christians from Kerala who are happy to be a part of a place where their great grandfather's body is laid to rest.

The earth or soil in which St. Thomas was buried was considered to have healing powers. In the year 1523 the tomb was opened to distribute the miraculous earth to many. One more legend was after St. Thomas death while they lowered the body into the tomb his right arm slowly started rising up as if it resisted his burial. They tried to push his hand back several times but it would not budge. They gave up after many attempts. When some Chinese tried to cut his finger and take it to their country for remembrance the hand went down. They were shocked and did not make any attempt to cut it off.

St. Mary's idol was brought to the church by St. Francis Xavier and she was called as Mylai matha by the locals. Her feast is observed in august every year and there is a great celebration by locals during that time. Feast of St. Thomas is observed during the end of June to beginning of July. Santhome basilica is filled with festivities during the months of June, July and August. 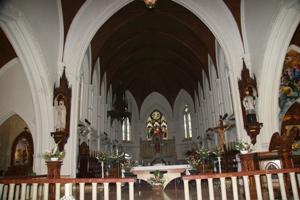 The main church has also been renovated with Eucharistic chapel behind the main church. There is also a liturgical center where one can buy Christian artifacts and books. Santhome Basilica also has launched web TV which can be watched from home by means of computer with internet connection. The holy services in the church is live telecasted on internet, so that one can have the experience of the church and services even at home. For capturing the events the basilica five cameras has been installed at various angles at various spots where the events are likely to take place. A console operator edits the video and relays it to a main server in US so that viewers around the world can view the holy events in the church. Video on demand mode is also available where the user can select any video they want from the list of programs available. Please find the link to access the santhome webtv. Thanks to the Priests and Sister who were kind enough to share the information about the church. For a detailed in depth history many books have been published time to time by the priests and scholars starting from nineteenth century. One can find them in the liturgical center.

Though there may be many legends about the miracles performed by St. Thomas, overall he was a great human being who helped many people from various distress and ailments by means of his faith. Unless a person does something good for people no one would remember him. Even without religious perspective he was a good human being with kindness in heart and has brought about many reforms in the society back then. India is country of value and culture; we live with faith and have various legends and many religions. The legend of St. Thomas is one among them. If you pay a visit to Chennai do not forget to visit the historical place and if possible pay tribute to the great human being who lived 2000 years ago and still remain in the hearts of many.

Thirumullaivayil, A Pilgrim Place Near Chennai

Thank you Vimal for going through my article and commenting on the same. I am glad that you get to know about Santhome basilica.

Our India is filled with religion integration.

Basically the sound and light are most important in realising God - it has been told clearly in all relgious topics.
Accordingly in Hindu temples we light lamps, making bell sounds; in churches we light candles and making bell sounds; in mosques using dhoop,light and making sound of bong - these are all based on the abovesaid principles. From this one is very much clear that all religion are one and we are all one.