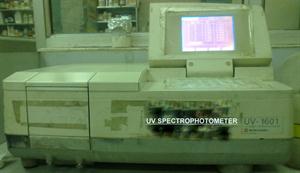 Generally, the most favoured transition is from the highest occupied molecular orbital (HOMO) to lowest unoccupied molecular orbital (LUMO). For most of the molecules, the lowest energy occupied molecular orbitals are s orbital, which correspond to sigma bonds. The p orbitals are at somewhat higher energy levels, the orbitals (nonbonding orbitals) with unshared paired of electrons lie at higher energy levels. The unoccupied or antibonding orbitals (pie* and sigma*) are the highest energy occupied orbitals.
In all the compounds (other than alkanes), the electrons undergo various transitions. Some of the important transitions with increasing energies are: nonbonding to pie*, nonbonding to sigma*, pie to pie*, sigma to pie* and sigma to sigma*.

UV spectroscopy obeys the Beer-Lambert law, which states that: when a beam of monochromatic light is passed through a solution of an absorbing substance, the rate of decrease of intensity of radiation with thickness of the absorbing solution is proportional to the incident radiation as well as the concentration of the solution.
The expression of Beer-Lambert law is-
A = log (I0/I) = Ecl
Where, A = absorbance
I0 = intensity of light incident upon sample cell
I = intensity of light leaving sample cell
C = molar concentration of solute
L = length of sample cell (cm.)
E = molar absorptivity

From the Beer-Lambert law it is clear that greater the number of molecules capable of absorbing light of a given wavelength, the greater the extent of light absorption. This is the basic principle of UV spectroscopy.

Instrumentation and working of UV spectroscopy

Monochromator- Monochromators generally composed of prisms and slits. The most of the spectrophotometers are double beam spectrophotometers. The radiation emitted from the primary source is dispersed with the help of rotating prisms. The various wavelengths of the light source which are separated by the prism are then selected by the slits such the rotation of the prism results in a series of continuously increasing wavelength to pass through the slits for recording purpose. The beam selected by the slit is monochromatic and further divided into two beams with the help of another prism.

Recording devices- Most of the time amplifier is coupled to a pen recorder which is connected to the computer. Computer stores all the data generated and produces the spectrum of the desired compound.

Concept of Chromophore and Auxochrome in the UV spectroscopy

Chromophore- Chromophore is defined as any isolated covalently bonded group that shows a characteristic absorption in the ultraviolet or visible region (200-800 nm). Chromophores can be divided into two groups-
a) Chromophores which contain p electrons and which undergo pie to pie* transitions. Ethylenes and acetylenes are the example of such chromophores.
b) Chromophores which contain both p and nonbonding electrons. They undergo two types of transitions; pie to pie* and nonbonding to pie*. Carbonyl, nitriles, azo compounds, nitro compounds etc. are the example of such chromophores.

Auxochromes- An auxochrome can be defined as any group which does not itself act as a chromophore but whose presence brings about a shift of the absorption band towards the longer wavelength of the spectrum. –OH,-OR,-NH2,-NHR, -SH etc. are the examples of auxochromic groups.

Absorption and intensity shifts in the UV spectroscopy

There are four types of shifts observed in the UV spectroscopy-

a) Bathochromic effect- This type of shift is also known as red shift. Bathochromic shift is an effect by virtue of which the absorption maximum is shifted towards the longer wavelength due to the presence of an auxochrome or change in solvents.
The nonbonding to pie* transition of carbonyl compounds observes bathochromic or red shift.

b) Hypsochromic shift- This effect is also known as blue shift. Hypsochromic shift is an effect by virtue of which absorption maximum is shifted towards the shorter wavelength. Generally it is caused due to the removal of conjugation or by changing the polarity of the solvents.

1. Detection of functional groups- UV spectroscopy is used to detect the presence or absence of chromophore in the compound. This is technique is not useful for the detection of chromophore in complex compounds. The absence of a band at a particular band can be seen as an evidence for the absence of a particular group. If the spectrum of a compound comes out to be transparent above 200 nm than it confirms the absence of –
a) Conjugation b) A carbonyl group c) Benzene or aromatic compound d) Bromo or iodo atoms.

4. Determination of configurations of geometrical isomers- It is observed that cis-alkenes absorb at different wavelength than the trans-alkenes. The two isomers can be distinguished with each other when one of the isomers has non-coplanar structure due to steric hindrances. The cis-isomer suffers distortion and absorbs at lower wavelength as compared to trans-isomer.

Full team squad with their captains of the IPL season 4.

DLF IPL 6 is coming soon, live in stadium and on Sony Max at homes. Here is an article about the schedules, ticket booking and latest grasps from IPL 6 2013. This article also contains a short review of 1-5 IPLs played in last 5 years. This article is relates "Indian Premier League 6 (IPL 6) 2013- Schedules and latest gasps".

The old debate of the priority of the clubs with respect to the country for the players has once again started with fresh controversy involving Gautam Gambhir and the shoulder injury which was aggravated during the IPL. The self proclaimed experts have been going all out against the board and the players as if they have fixed a match.

I really love your work because its straight to the point and well summarized.
I would also love a detailed report on qualitative analysis of analyze using UV and properties of a sample that can be directly determined by UV. When you have a sample not fulfilling requirements in order to be analyzed using UV what should be done to it in order to be analyzed?

add some more applications with examples

It is really good.

Its application is useful for me for the preparation of my final examination of chemical engineering.

Its very useful for all the analysts. Explanation is very good with simple language. Really, I like it.

it is really a very good and easily understandable information!

Awesome sir. I liked the way you briefed it but if you add a more note on detectors that would be more perfect

Thank you so much for sharing UV principles and applications. Kindly share the working procedure with block diagram. It will be very helpful if you share other instruments principles also.

It is really very nice .thank you very much

I like your article because you have given a perfect pattern of UV spectroscopy.

It is really good all points

Interesting to understand the actual concept.

Very good ideas but add also more explanation of model of UV and from what does the given UV made metals, nonmetal or etc more it is very good I can say.

Mr.Aman, thank you very much for your effort. Your content is very reliable and precise from the point of view of an academic. It is really helpful to all analytical chemists. I would like to suggest you to please add more practical and application content to the article.

thank you sir for this idea . it is very helpfull for me bcoz its give me most usefull infomation of uv in a small time.
kindly share working procedure with block diagram whereby that are more suitable for study.
once again thanku

Your description about UV spectroscopy is good and is easy to understand.

Great work. Can you please provide references for this article. It would be very helpful for me.