• A Punjabi may live anywhere in the world, but he can never forget the taste of the recipe made from mustard stems and leaves called Sarson ka saag which he relishes with fresh butter and roti made from maize flour (Makki di roti). Whenever any Punjabi returns to his or her native place in Punjab even after spending many years abroad, he or she will first ask for this recipe to be prepared at home so that he or she can once again relive his or her young days spent in Punjab. The mustard plants are very young and tender in the month of November which is very suitable for making the vegetable recipe 'Sarson ka saag'.

• Many of us read and prepared this recipe as given by famous commercial cooks like Sanjeev Kapoor and the writer of the cook books like Tarla Dalal. In those recipes, one will find only the description about the ingredients and the method to cook them. But the method of preparation of this recipe is described from the stage the tender stems and leaves of mustard plants are picked from the mustard plants grown in the fields or our vegetable gardens grown in back yards or even on terraces.

Mustard plants properties and importance as a leafy vegetable

• Before we take up the preparation of a recipe from the mustard plants, let us have a look at various properties of the mustard plants products. For thousands of years, the stems, leaves and seeds of mustard plants have been used in various countries of the world. The green leaves have been used as side dishes and even for salads. The seeds have been used to give a pungent flavour as condiments when frying of roasting various wet or dry recipes. Mustard oil made from the seeds of the mustard is commonly used for applying to body in the north India. This oil is also used as common medium of cooking in the state of Jammu and Kashmir. In cold places like the J&K, the people use mustard because its hot herbal properties.

• References has been found about the mustard in our ancient Sanskrit classics and even the holy book of the Christians Bible termed mustard as "the greatest among the herbs" because of its very strong flavour and even healing properties. So, the mustard has been used as a food, medicine, spice and a condiment from many centuries all over the world though the mustard bearing yellow flowers is the native of North Africa, Central Asia and the Mediterranean. Canada is the world's largest exporter of the mustard seeds.

• The Chinese took the advantage of the healing properties of mustard and have used it for centuries for treating many ailments. The Chinese herbal specialists have used the mustard in the treatment of abscesses, bronchitis, colds, rheumatism, toothache, ulcers, and stomach disorders. Mustard is an excellent source of unsaturated fats, phosphorus, iron, calcium, zinc, magnesium and manganese. These properties have helped the mustard to be used in the cure of asthma, rheumatoid arthritis and even cancer. Even to these days, a paste of equal parts of wheat flour and powdered mustard seeds is made for using it as a mustard plaster to treat rheumatism, arthritis, chest congestion, aching back, and sore muscles.

• Mustard greens are a very good source of vitamin E, vitamin C and beta-carotene. The plants also contain small quantities of vitamin B6, folic acid, magnesium, calcium, iron, niacin and even vitamin A. Mustard plants usually get four petalled yellow or white flowers and they can grow to a height of about two to four feet. Mustard plants are a seasonal crop and grow well in mild wintry conditions. They have broad dark green leaves with a pungent flavour.

• As leafy vegetable, mustard plants tender stems and leaves are for making saag (a paste of stems and leaves). These days we also get tinned Sarson ka saag ready to fry and eat. Spinach is the usual ingredient to make saag with mustard leaves and tender stems. Let's us now proceed step by step from the field of mustard plants to their tasty recipe made in the kitchen. 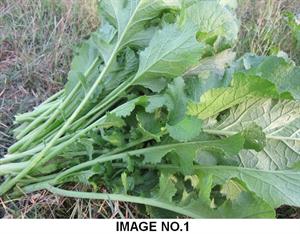 • To make a tasty mustard plants recipe, we must let the plant to grow to a size when it gets a long stem. The stem along with its leaves can be easily picked up with one of our hands. We must feel the softness of the stem and should pluck it from there. You will not be able to pluck the stem from the portion where it has become hard. Pick about 2 – 3 kg of stems with leaves because about half of it will be wasted when you finally make it ready for fine chopping. You may have a look at the soft stems just cut from the field in the image No.1. 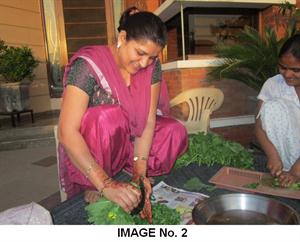 • The long, broad and thick leaves have to be removed from the stem so that only a few soft leaves are left with the stems. This way half of the mustard plants which you brought from the field might go waste. If you don't want to waste them, you can make another side dish by putting them in a mutton curry. The mixture of mutton pieces and the mustard leaves makes a tasty recipe. Now a group of stem made ready for cutting, should be taken in one hand and they should be finely chopped with a sharp knife or a curved knife (daatri) made specially for cutting and chopping mustard plants stems and leaves. You can see the process in the image No. 2.

Mixing of spinach leaves with the mustard plants stems and leaves

Washing the cut and chopped mustard stems and leaves and spinach 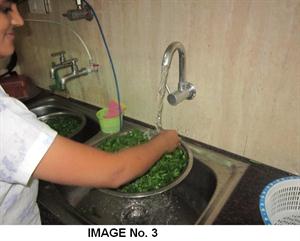 • Before cooking, the cut mustard stems and leaves and spinach should be thoroughly washed most preferably under running tap water. Keep a large open large pan under running water. Put the cut saag in the water and wash it thoroughly before you make it ready for boiling in a pressure cooker. This is very essential to wash any sand or dust which might have stuck to the leaves of the plants. Ensure that no sand or dust particles are left with the saag. See image No. 3. 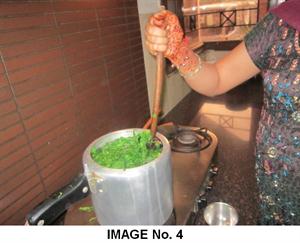 • Add salt to taste and put about 8 – 10 whole green chillies and keep stirring for some time. After the ingredients are settled a little in the cooker, cover the cooker with weight. All this time the gas stove should be on high flame. After three or four whistles, reduce the flame and let the ingredients cook for another 20 – 25 minutes without whistling. Remove from the stove and let it get cooled for sometime and then remove the weight. Never force open the weight of the cooker. If necessary, you can keep it under running water to get it cooled. Remove the lid of the pressure cooker and add a small quantity of maize flour (about one handful) little by little and keep on stirring the ingredients to get a nice consistent paste. Your Sarson ka saag is ready for frying.

6. Tomatoes red and ripened – about 4 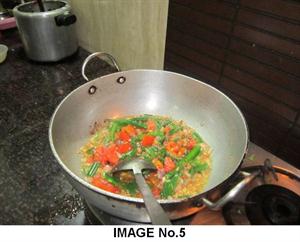 • Take a large frying pan and pour cooking oil in it. In former days, the Punjabis used ghee in stead of the modern cooking oils. But now the trend has changed. Let the oil be heated for some time on high flame. Reduce the flame a little and add onions. After a while add ginger and garlic and let it get fried till golden brown. Now add cut tomatoes and chillies and let the tomatoes become soft and cook a little.

• After the ingredients are done, put saag from the cooker into the frying pan little by little and keep on stirring.

• Put only that much saag which you think can be consumed by the members. If it is extra keep it in the fridge to be fried the next time you want to eat it.

• Your saag is ready to be served. Preferably add a little fresh butter if you have, otherwise the pasteurised butter also will do. Avoid it if you are calorie conscious. Prepare hot maize flour (Makki ki roti) to enjoy the flavour of both. See below the image No. 6 of cooked saag. 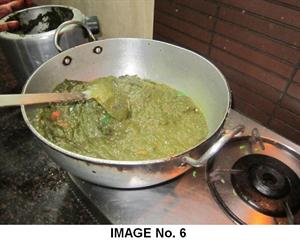 Do you like to eat sweets? Do you like to prepare sweets by yourself? If yes, here you have the recipe to make a special halwa and a special gulab jamun. All of you may have heard of halwas made of various ingredients like grain flour, sunflower seeds, various nuts, beans, lentils, carrots, pumpkins etc. But, do you know that halwas can be made of bread? Similarly using bread, we can also make gulab jamun. Here is the recipe to prepare a special bread halwa and a special bread gulab jamun.

This article will explain the ingredients required and the making of Chocolate Custard step by step. This article will finish with the time estimation. All over this is a tasty and delicious recipe which is healthy while added with fruits.

“Kofta” is one of the best dish which normally we prefer to add in our party’s menu. We normally cook malai kofta, lauki kofta very often. In this article I am sharing a delicious recipe of “Eggs kofta." I am sure this is a good option for nov vegetarian.

Mayonnaise is a emulsion of raw egg yolk, oil, and other flavoring agents. It is a basic sauce from which various other sauces and dips are made. Here I have tried to put forth every possible easy recipe of making mayonnaise with egg yolks, egg whites and veg mayonnaise.

Pepper Chicken Recipe a different and delicious item for every one. It is very easy to cook. This Dish should always be served steaming hot. This preparation is awesome. Serve with roti or paratha. All you like this recipe very much.

Hello sir,
I am also punjabi and I love sarson ka saag.

Thanks Amandeep for your comments. I don't think you will find any better description on the internet of preparation of sarson da saag fully illustrated with pictures as you find here.