In everyday life, we often come across many types of structures made up of iron and its alloy. Iron is one of the most used material in the world and one needs to use it in everyday life in terms of many structures, appliances, and other ways. This article shows you how many types of Iron, engineers are using in applications based on their properties and suitability. 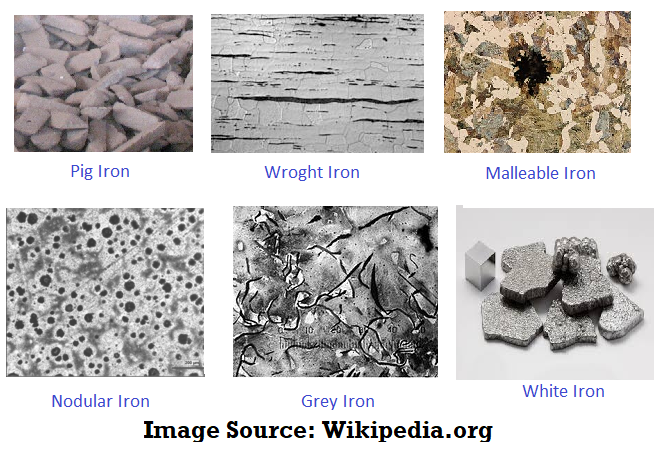 Pig Iron and its properties


Each steel type is having its unique properties. stainless steel contain 11% chromium and this enables it to form stain, corrosion, or rust resistance

Why is iron a magnetic metal?

Metals like nickel, iron, cobalt, gadolinium, etc. are having four free electrons having the same spin directions. This enables them to be magnetic compared to the other metals.

If we conclude, that iron is having basic three types namely pig iron, cast iron, and wrought iron. Iron is magnetic material because its free electrons have the same spin directions. The other properties of iron depend on the amount of carbon it contains.

It was quite helpful to understand basic iron types.

Yeah this website is so helpful for me
Because I am weak in metal information.
So it gives me some meaningful information for my studies.
I like it
Please can you send me mail of many different. Types of metal and material properties

Can u please explain the difference between types of iron and alloys of iron?
I'd there any difference?

I want more information about iron and their properties

Very nice and easy to understand

I need information on their pros and cons based on how they are used.

This article was quite helpful to understand basic types of iron.