Salim Moijuddin Abdul Ali who is known by the whole world as an eminent bird –lover, was born on 12th November 1896in Bombay presently known as Mumbai. Moijuddin was his fatherand mother's name was Zeenat-un-Nisa. He had 5 brothers and 4 sisters. When he was only three years old, lost his mother. His father had already died two years earlier. He was brought up by his maternal uncle Amiruddin Tayyabji who had no child. In 1918, he was married to Tehmina Begum. 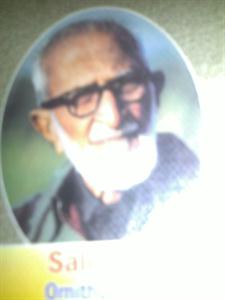 His education started from janana Bible medical Mission Girl's High School. Then he was admitted in St. Xavier's School. He was not interested in his curricular studies and in 1913, he somehow matriculated from Bombay University. He took admission in college but as he was weak in algebra and Logarithms, he left his studies and went to Burma to help his brother in business. He could not adjust himself there also. He liked wandering in free natural atmosphere. In Burma he spent most of his time in roaming and watching birds. He returned Bombay and graduated in Zoology in 1917 and was appointed as a guide in a museum in Bombay Natural History Society. In the mean time he got a golden opportunity for training in Germany where he was to learn the modern technique to fill husk into the dead bodies of birds. After coming back from Germany, he became unemployed.

The great ornithologist Salim Ali used to get up early in the morning and used to roam about till evening. His eyes searched something in the sky and on the top of the trees. He was a man of strong determination. Many times on his usual strolls he saw half woven nests of weaver birds in the bushes and on the trees. He thought why these birds make so many nests when they can fulfill their purpose with one nest only. Salim Ali's house was situated among the trees and had a serene environment around. In the monsoon, he saw that the weaver birds had made several nests around his house. He keenly observed the activities of theses birds for 3-4 months. He studied that the male weaver bird takes the responsibility of making the nests. He prepares the nests with the help of dry twigs of paddy, grass etc and gives it the shape of a bottle. The female weaver bird comes and choose a suitable nest and helps the male to finish the nest-making completely. Then the female lays her eggs in the selected nest. As the female lays eggs, the male makes busy himself in making another nest and another female weaver bird comes and lays eggs. In this way, the process goes on. A male weaver bird in the same breeding season established two or more families. The female weaver bird carries the responsibility of hatching the eggs and bringing up the young ones. Salim Ali gained popularity as an ornithologist when his research was published in 1930. A famous ornithologist declared that Salim Ali's observation were not correct. But finally, Salim Ali was confirmed correct in his observation. His research of Fin Baya is also a very important contribution. It was assumed that Fin Baya had been extinct since last 100 years but Salim Ali found Fin Baya in the mountain ranges of Kumayu.In 1941, Salim Ali wrote a book named Book of Indian Birds . The book contained not only fine descriptions but also beautiful pictures of the various species of birds. A lay- man could easily read and identify the birds through the book. In 1948, Salim Ali started an ambitious project with S. Dilan Replay. Both wrote a book of ten volumes named Handbook of the Birds of India and Pakistan. The book contains complete information about the birds found in Indian subcontinent.

Salim Ali was rewarded several times for his remarkable job done in the field of ornithology. The famous awards were:

Apart from these, he received many more prizes. The universities of Aligarh, Delhi, Andhra ornamented him with the Degree of Doctorate.

Salim Ali travelled throughout the country for bird watching. Not a corner of India was left where his heavy boots had not left its prints. The great ornithologist died on 20th June 1987 at the age of 91 years.

Dr. Salim Ali is also known as the “birdman of India". One of the greatest scientists who has carried out systematic survey on birds in India and abroad. His contribution and research work on birds has great influence in the development of ornithology.

The Bird sanctuary in Goa was named after him.

I appreciate the author for presenting such a good article on the great personality.

When Dr. Salim Ali was a child he shot at the doves. Then his uncle asked him to not to hit them. He took him to the city of Mumbai and showed him the sanctuary of birds. At that time Dr. Salim Ali became aware about the beautiful world of birds and then he decided to serve his life for birds.