India is proud of being the birth place of great national heroes like Sardar Vallabhbhai Patel, Netaji Subhash Chandra Bose, Shivaji Maharaj, Mahatma Gandhi, Swami Vivekananda, Chandra Shekhar Azad, Bhagat Singh, Lal Bahadur Shastri etc. Among them I choose Mahatma Gandhi as my favourite National hero. The title “Mahatma" i.e. a great soul was given to Gandhiji by the people. Gandhiji begged the people not to call him 'Mahatma'. He said that he was only 'Alpatma' means low spirit. 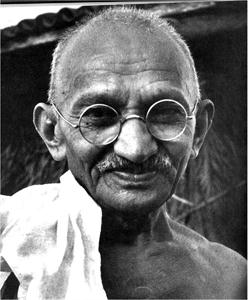 He became great by reason of the way in which he ordered his life. Deeds are better than words. A man is to be managed by his nature and conduct. He had a faith in deeds, not in words. Man cannot be judged by the opinions he holds. He ordered his life to do as he wished.

He would ask himself during the day if he said or did anything which was unworthy. If he did some mistakes, he would pray to God that he should be saved from doing wrong. People thought of him as a perfect man. But he often called himself a sinner. He considered temptations, pride and desire to hurt others as sin.

Mahatma was considered to be perfect man. It is very difficult for humans to reach that goal of perfection. He was a man of truth, non-violence and simplicity. These principles were the part and parcel of his life. He thought of others and lived for others. He believed in self-reliance, self-help and unselfishness. Truth, non-violence, boycott of foreign goods, 'Satyagraha', and 'Sarvodaya' were his gifts to the world in the twentieth century. He gave up all his wealth. He only put on khadi garments. He was a sanyasi. He had no desire to get power, fame, or influence. He did not care for himself. He believed in 'service to living things is service to God'.

He was also brave. In freedom struggle, he was always ahead of the processions in difficult situations. Gandhiji succeeded in the fight against Britishers with arms and ammunition made up of non-violence. Another strong virtue in him was forgiveness. Even he forgave his foes (enemies). He tried to destroy his foes by making them friends. He loved them as his friends. He worked for the uplift of the downtrodden. All people call him 'The Father of the Nation'. He was also called 'Bapu'. Hence, he is my favourite National hero. I love him from the core my heart.

Mahatma Gandhi And My Mongolian Students

Mahatma Gandhi,our father of the nation is awe inspiring as not only Indians but also foreigners are interested to know more about him. In this essay, I would like to discuss about the interest the great hero has created among my Mongolian students.

Types of ATM and benefits of ATM

Different types of ATM are available and the main benefit of this ATM is.

Indian Constitution provides the right to work, but even after fifty years of framing the constitution the legislation to implement the same was not made. Now the Mahatma Gandhi National Rural Employment Guarantee Act(2005) passed by the Parliament and the introduction of the Employment Guarantee Scheme have changed the whole scenario. Different States in the nation has introduced the scheme with much enthusiasm.

This article is about Gandhi Jayanthi which is one of the prominent Indian festivals. Gandhi Jayanthi signifies Mahatma Gandhiji’s birthday on 2nd of October. Gandhiji is one of the well known personas in the world and a great icon of India who brought upon the freedom movement in India. By remembering his birthday in the name of Gandhi jayanthi, we Indians remind ourselves of our past and the ways to cherish the greatness of our nation.