1498- It all began when the first route en sea was discovered by Vasco Da Gama in the year 1498 and entered Calcutta for the first time in the worlds history. The British people were only doing businesses here and there in India with the support of Indian Emperor at that time period.

1757- The British did not start their rule in our country till the year 1757 when the first war the Battle of Plassey started. This is the first war in which the Siraj Ud Daullah, Mir Jafar and Rai Dhurlab were all defeated and killed by the British Army.

1764- The second battle in India against the British was the Battle of the Buxer where the Nawabs and the Mughal empires jointly went in war with the British Emperor but it was also a failure as both the Nawabs from the Bengal and the Indian Emperor were defeated by the British.

1857- The first war for the Indian Independence occurred in this year and this was the year when the British rulers took India fully under their control. 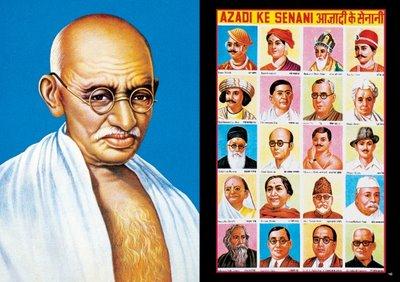 1905- This is the year when the Bengal was partitioned from India and a separate country named the Bengal was formed and this had its own constituency, this was formed due to the gap that existed between the Hindu religions and the Muslims.

1916- In this year the Home Run rule which means government for our self was introduced by the famous revolutionaries like Bal Gangadhar Tilak and Annie Besant. While Bal Gangadhar started his protest in Pune Anne Besant started the protest in Tamil Nadu. 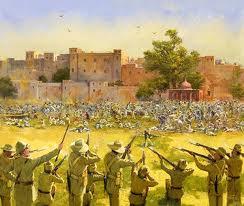 It is said as a massacre as this is the lone event where about 3800 peoples were killed in the gun fire that happened at the garden in Punjab, The Jallianwala Bagh. This Incident is one of the horrible events in the history as there were about 20000 of them in the place and the British in the command of Dyer open fired at the population leading to such an incident and it is said that the garden still contains the bullets that were fired on the Indians.

1920- The Non corporation movement was started by Gandhi only in this year where it was for the refusal of the foreign government, its law, and the products from the foreign were neglected in total by the Indians. It is as the name indicates a non corporation between British and the Indians.

1930- Dandi March- This was the march that was started by our nation father Gandhi along with some78 supporters where they started to walk from Sabarmati Ashram in Ahmadabad to the place called Dandi in Mumbai. The movement was also called as Salt Satyagraha as the sole aim of the march was to prepare our own salt rather to depend on the British.

1942- The famous Quit India movement by the Indians started in this year that was again leaded by the Mahatma Gandhi, Where the prime motive was to send the British out of our nation and after this protest most of them were arrested and kept in the prison for most of the days.

1947- It is in this year that India got its independence from the British after fighting many cold wars. Another important thing that happened in this year was the partition of Pakistan and India where the Leader of the Muslim League Wanted a separate country for the Muslims and thus India divided into two countries namely India and Pakistan where the Prime Minister of India was Jawaharlal Nehru and the Prime Minister of Pakistan was Md. Ali Jinnah.

Some of the Good things done by the British

Abolish of Sati system in India
The sati system was one of the worst systems that were practiced before the independence revolt in 1857. It is the system in which the girl used to die with her husband in case the husband dies before the girl. I think these types of things should be changed and this change was brought only by the British rulers.

Causes that Lead to the Revolt of 1857

Taxation was high as ever before
The tax rate collected by the British kingdom was much more than what was to be paid. The British raised the tax rates and they sold most of their products in the Indian market.

Tariff Policy against Indian Products in the market
There were more number of policies and restrictions that were laid on the government of India and its people in the British period.

Abolish the handicrafts
The handicraft business carried out by the Indian on small scale was totally abolished and the products from the foreign countries were brought and sold here, this made the local workers and the small Zamindar's angry as their business came to an end by the activities of the British Rule in India.

State of Internal Emergency in India