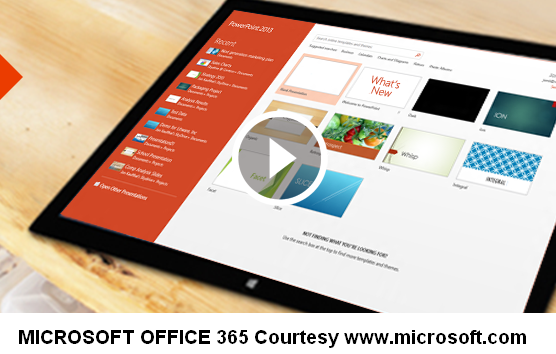 Microsoft Office has a phenomenal growth since its launch in 1989.

A brief account of various versions of Microsoft Office for Windows and Macintosh.

Since the time of its inception, Microsoft has brought out several versions of Microsoft Office both for Windows and Macintosh. Starting with its initial release as Microsoft Office for Windows, the office suite continued its journey by bringing out Windows versions as 1.4, 1.6, 3.0, 4.0, 4.2 (for Windows NT), 4.3, 95, 97, 2000, XP, 2003, 2007, 2010 and 2013. Similarly, the Macintosh versions were released naming them as 1.5, 3.0, 4.2, 98, 2001, v.X, 2004, 2008 and 2011. From the original set of three applications, viz. Microsoft Word, Excel and PowerPoint, the Microsoft went on making improvements in the Microsoft suite by adding provisions like a common spell checker, Object Linking and Embedding (OLE) data integration and Microsoft Visual Basic for Applications scripting language. Owing to the popularity and ease of use and integration of many office business applications, the Microsoft Office suite is the choice of more than a billion people throughout the world.

Just within a period of three months from the last release of Office 2013 for Windows on October 11, 2012 and the RTM final code of Office 2013 Professional Plus for TechNet and MSDN subscribers on October 24, 2012 and the 60-day trial version of Office 2013 Professional Plus released for download on November 15, 2012, it is surprising to note that Microsoft has released a new version of its Office software for home users by naming it Office 365 Home Premium on January 29, 2013. Microsoft claims that its new version called Office 365 Home Premium is the first major overhaul of its Office software since 2010. There are reports that the large companies which usually are the buyers of Microsoft's software under multi-year contracts have already received the latest features of the new Office application in the month of December 2012 itself. Microsoft has created a new logo for its edition of Office 365 Home Premium which is in orange colour and is a .png format file of the size 1888×654 pixels.

What is new in Office 365 Home Premium released by Microsoft on January 29, 2013

The new edition of Office 365 Home Premium, which includes its usual desktop applications like Outlook email, Word, Excel and Power Point is primarily intended to be used by home users instead of the business houses. Office 365 Home Premium is mainly targeted at the home office in order to meet the competition generated by the Google's free online apps. It is quite obvious that Microsoft does not want to lose its grip over the home users of Microsoft Office due to the threatening competition from free online apps released by Google from time to time. The Microsoft has been keeping a watch over the use of its applications vis-à-vis the use of modern electronic gadgets and devices like smartphones and iPads, which the people prefer to use while on the go. With an intention to keep the documents and data updated online and sensing the mood of the people working with their online devices, made Microsoft to launch Office 365 Home Premium on January 29, 2013 even though it had released the Microsoft Office 2013 for Windows only about three months back. Office 365 Home Premium has features which will constantly update the documents with an online access, which will be compatible with a range of modern online devices. So, the world's largest software company has once again tried to keep its greatly demanded office software in tune with the changing trends in the world of communication and technology. While giving an interview on phone, the head of the Microsoft's Office unit, Kurt DelBene made the intention of the Microsoft's Think Tank very clear in the following words: "The notion of an always up-to-date streaming version of Office comes directly from how people are using devices today. You really want all your content to roam with you. We see that as an opportunity to deliver what customers are asking for." This assumption has proved to be true having the first look at the individual customers, whose initial reactions were found to be positive at Microsoft's flagship Seatle store. Some customers were found to be impressed at the touch screen of the new Office 365 Home Premium while some others were fascinated by its excitingly new PowerPoint application. But it will be a hard task to pull the people, who have become Apple enthusiasts over a period of time, to the new Office 365 Home Premium.

The design of Office 365 Home Premium is quite modern although it looks mainly like Windows 8. It has a touch screen capability. The command ribbons used in Word and Excel has not been changed much in the Office 365 Home Premium. One of the striking changes that have been made is the inclusion of the online calling facility and video service using Skype. The users are enabled to store their work on their devices. The data can also be stored and saved in remote data centres like the Cloud through a SkyDrive. Any licensed device can be used with a browser to access the latest version of a document.

The people can download the basic programmes online. They can then have access to the latest versions of all Office applications. The subscription rate is about Rs.4199 a year or Rs.420 per month for up to five PCs or Mac and additional 5 mobile devices (Currently only Windows Phones and Windows RT tablets are supported) which includes 20GB of SkyDrive (Cloud) storage. Mac users will however continue to use Office 2011 until the update is available for the current version which may take 6-10 months according to Microsoft. Formerly, the users had to wait for years to upgrade the installed software. With Office 365 Home Premium, the software will be updated online hassle free. Making the Office compatible to online devices and services is a step towards making Microsoft more like Apple. The new Office 365 Home Premium will run on both the RT and Pro versions of Microsoft's Surface tablets that run on ARM holdings and Intel Corp chips respectively. The new Office 365 Home Premium will, however, not run on Apple's iPad. This would surely disappoint some of the Office fans who use iPads.

The new Office 365 Home Premium is mainly designed to counter the growing reputation of Google Apps which has office style apps free for home users but sells them to business @ $50 a year per user. Microsoft does not want to lose its domination of the business market and hence the new Office 365 Home Premium. Microsoft hopes that its venturing into online services along with its Surface tablets will give it an edge over its competitors in the world of mobile computing. It would thus give a tough competition to the leader Google's Android software and Apple's stick hardware and apps. However, Microsoft has still to make more efforts to turn its Windows tablets fully finger-friendly.