Late Professor Anna Mani is a pioneer Indian woman in the field of scientific research and experimentation. She was a well known physicist and meteorologist in the scientific circle. Her intellectual research work, dedication and strong character was admired by everyone who ever met her. She was among top women scientists and researchers of India whose contribution was internationally recognized. 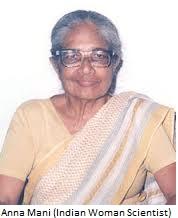 Anna Mani was born on 23rd August 1918 in Peerumedu, Travancore. She was a bright student during her school days and unlike other girls of her time, was more interested in pursuing higher studies in her field of interest. The influence of struggle for freedom and Gandhian thoughts was very much evident by her personality. She took her last breath on 16th August 2001 at the age of 82 years at Thiruvananthapuram, Kerala, India. She dedicated her complete life to experimentation and research in the field of her interest. Those continuous tiring hours of work and stressful environment too could not discourage her from continuing with her research. She was among those fortunate ones who got the privilege of working under Prof. C.V.Raman, a great physicist.

In the year 1940, Anna Mani joined Indian Institute of Science, Bangalore as a research scholar in Physics after obtaining a scholarship. Being accepted in the prestigious Raman's laboratory as a graduate student was a matter of pride for her where she worked on the "spectroscopy of diamonds and rubies".

Between the years 1942 and 1945, Anna Mani published 5 single-authored research papers on the "luminescence of diamonds and ruby". In the year 1945, at Madras University she submitted her Ph.D dissertation before leaving for England for an internship program on government scholarship. There she specialized in "meteorological instrumentation".

In 1948, Anna Mani returned to free India. She then joined 'Indian Meteorological Department situated at Pune. There she was in-charge of 'Construction of radiation instrumentation'.

Her published papers were based on various subjects such as 'Atmospheric ozone', 'The need for international instrument comparison' and 'National standardization of meteorological instrumentation'.

She retired in the year 1976 as the Deputy Director General of the Indian Meteorological Department but continued with her work as a visiting professor at the Raman Research Institute.

In 1993, she worked on a project dealing with the harness of wind energy in India in the year 1993. She was very concern on environmental issues and did a lot of research on non-conventional sources of energy in her later part of life. This work involved the design of new and improved instruments, assembly, establishment and operation of many advanced wind monitoring units, and also, the publication of data involving the most suitable form of wind energy and radiation.

Anna Mani was awarded with K.R.Ramanathan Medal in the year 1987 for her great achievements in her field of research on instrumentation.

Words from the Author

Anna Mani was the pioneer women scientist of India who inspired a lot of women to carry on with their work in spite of many odds in life. She would always be remembered for her great scientific achievements in the field of meteorological instrumentation and intense research in the fields of solar radiation, wind energy measurements, and ozone layer. She was widely admired for her sense of humor, laughter and warmth. During her later years of life she fought bravely against Parkinson's Disease; but finally lost this battle on 16th August 2001.

We deeply regret the gender bias shown on her by the scientific institutions. Despite her intense and highly intellectual research work, Anna Mani was never granted a Ph.D degree. Her completed doctoral dissertations are still present in the library of Raman Research Institute. Madras University denied her a doctoral degree at that time on the criterion that she does not have a M.Sc. degree. On behalf of all the intellectual community, I would like to demand a doctoral degree for Anna Mani for her research work posthumously.

Indian society is filled with innumerable names of women that have made a mark for themselves with great dedication and exemplary perseverance. Some of them are popular and have wide following while some are totally unnoticed and lost in the long list of women achievers that India has produced. In this article I have tried to bring out the names of some of the most popular Indian women in Indian society.

In this article you will find a brief biography of some of the world famous Indian women who proved to the world that Indian women too are much progressed. These women have showcased their talents at the world level and have excelled in their chosen field.

The growing aggression in modern women

The independent woman of today is falling a victim to aggression. Her aggressiveness is said to be a result of her being employed and progressive. Let's find out through this article if modern woman is really aggressive. What are the reasons/ factors behind aggression of women and how society causes aggression of women?

Indian society has some totally unnoticed women that very few people know about, but who have brought a positive change in the world around them and others. In this article I have tried to bring out the names of such unfamiliar faces of Indian women in our society.

In the advanced world conditions, women are choosing challenging careers and achieving great successes. This article provides information of successful and talented Indian women journalists working in electronic media. The article has covered the popular women journalist's educational qualifications, journalism career achievements along with the details of awards won by them.