Around 350 km from Mumbai there is a small village in Sangli district, Battis Shirala. This village is situated at western part of Maharashtra, which is approximate 60km far from Sangli. Battis means '32', in Marathi. You may get confused why are using 'Battis' before the name Shirala. The reason is that Shirala is one of the Taluka in Sangli and there are thirty two small villages which comes under Shirala taluka, that's why the name is Battis Shirala.

Though all the facilities are present in this village, but still agriculture is the main source of income in this village. All the people from this village and nearby village are very religious and I am saying this because of their very old festival which is Nag Panchami. The villagers celebrate "Nag Panchami" (Snake Worship) festival every year on 5th day month of Shravan according to the Marathi calendar, which means in the month of July or August. This festival is older than a century. The people from this village have faith on Lord Shiva and we know that Nag (Snake) is a friend of Lord Shiva in Hindu Religion. So, they celebrate this festival with full of purity and faith. The people catch snakes and worship them on this auspicious day.

How do they catch snakes:-

Before going for snake hunting, people take kaul (permission) from Goddess Amba Bai by placing flower on her head. If the flower falls on left side, then that family allowed catching the snakes that year. It is believed that the only natives of that village are allowed to catch the snakes. On Bendur, a day approximately two weeks before the festival, farmers clean their cows and bulls, decorate them and feed them with some special food. After that the villagers go for snake hunting. Everyday villagers catch snakes by tracking their body marks in the soil. They catch the venomous India King Cobra as well. After tracking down the snake, they carefully dug down the earth where the snakes are hidden. The people who are catching snakes won't take any special training for that. But they still work as professionals and they are so careful that snakes should not get hurt. They consider bad omen if they hurt snakes. There are 70-80 groups present in Shirala taluka who catch snakes every year for this festival and if they are lucky then each group catches 4-5 snakes. After catching snake, they keep them in a earthen pot and cloth is used to cover top of the pot and hang those pots inside the house. Villagers take them out every day and feed them with frogs and rats. This feeding is called Dav Pajane or feeding dew to a snake. 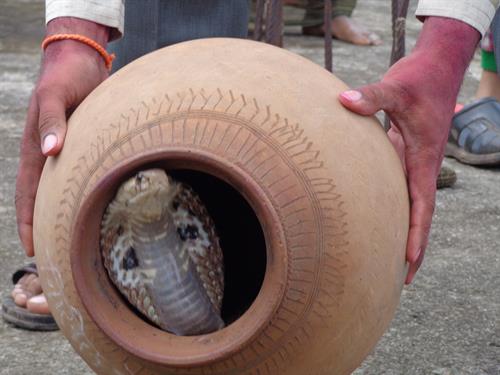 On the festival day:-

On the day of festival, each group takes their snakes to the temple of goddess 'Amba Bai' and takes blessings. Before that snakes are taken to the neighboring homes and where women worship these snakes in a traditional way. After that big rally organized by each group, in which they display snakes on tractors or open vehicles. Thousands of people from near villages and cities come to enjoy and take part in this festival. People dance and enjoy every bit along the rally. The rally continues till evening. Snakebite is very dangerous and it may causes death. So, safety measures are also taken care, because snakes are venomous, all the required medicines are available in village Government hospitals and other hospitals. Even policemen are there to control the crowd. Next day after the festival people release the caught snakes at the same place which they were caught. 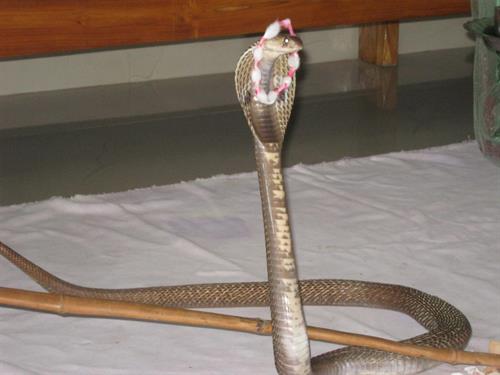 Few years back court banned catching of snakes due to inappropriate handling of snakes, results in their death. There were competitions on festival day. The prizes were given to the groups who were having longest snake, unique snake and the snake who can stand tall etc. Now these competitions are banned by the Court. Now people just catch snakes and worship them. 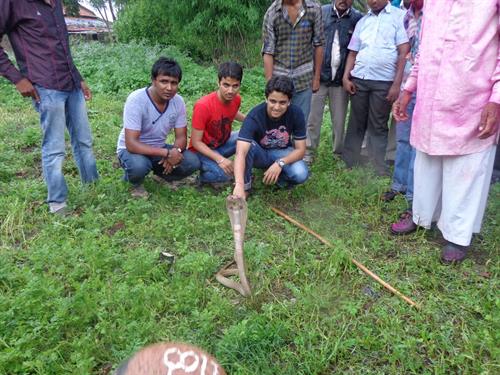 The Myth behind celebrating Nag Panchami is that, many years back one of the family from Shirala use to worship snake idol. When one of the Navnath (Gorakhnath) visited their place and he gave them permission to catch real snakes and worship them. Shirala also has Gorakhnath temple. Once in 12 years all the followers of Nath panti visit Shirala and leave one of them behind to take care of this temple for next 12 years. Shirala also famous for one of the eleven Maruti temples built by saint Samartha Ramdas in 17th century. This is all about Shirala, which is blessed with historic backgrounds and the history hidden in it.

How to Reach Battis Shirala:-

Article by Mahesh Gaikwad
Mahesh is a Software Developer and working in an IT industry for more than 2 years. He is a tech savvy, so he keeps himself updated with latest technologies. Blogging is his passion and he write technical articles most of the time.

Mahesh,
It is really great to know about the Nag Panchami the snake festival. And is nice to see your good photographs and attachments.

Thanks for reading my resource. Battis Shirala is my village and I could not resist sharing my personal experience and thefacts about this to the world.

Hi Mahesh,
Thanks for sharing detailed information about the Nagpanchmi festival at your village "Battis Shirala". Now, I am tempted to visit your village to get a feel of this festival. Keep writing such good articles.