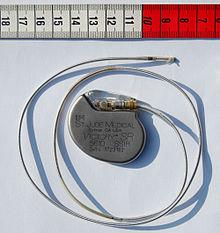 Though there is not even the remotest possibility that your pacemaker may stop working properly because of electrical interference, but the person living with a pacemaker implanted, needs to take extra precautions. Though this article is not intended to substitute for any medical or expert advice, yet to create awareness among such patients, their caretakers, attendants and nears and dears, public, who are aware of the fact that the person is living with implanted pacemaker, need to know and follow the following special precautions so that they can spread the word of knowledge

Use of Mobile, Smart Phone

Though it is not unsafe to talk on a cell phone, but the persons with implanted pacemaker needs to ensure that cell phone with turned on position is not placed directly over the pacemaker implantation site as the pacemaker could misinterpret the cell phone signal as heartbeat and withhold pacing, the basic function of the pacemaker, resulting into signs and symptoms of sudden fatigue.


Passing through security systems at airports of anywhere

Though while passing through metal detectors at airports may not interfere with your pacemaker but the metal in it may sound the alarm. As such avoid do not lean against a metal detection device or system. Hospitals issue valid ID cards to the persons with an implanted pacemaker, to be shown to security personnel. However, if security personnel insist on using a handy metal detector, politely tell them not to place the device near the pacemaker for a longer duration than necessary or the person living with a pacemaker can request for alternative personal search without the shirt.

If any medical procedure, which involves exposure to electromagnetic field or energy, is to be undertaken by your doctor then tell the doctor that you have got pacemaker implant. Such procedures include magnetic resonance imaging (MRI), Radiation therapy for cancer, lithotripsy using shock waves to break up large kidney stones or gallstones. Even if the person with a pacemaker implant is undergoing electrocautery needle surgery to control bleeding the doctors needs to be informed as it can also interfere with pacemaker function.

It is prudent to stay at least 1 meter away from welding machines, and high voltage transformers or motorized generator systems. However if such a professional himself or herself has a pacemaker implant then the doctors can arrange tests in the workplace itself to find if it affects the pacemaker or not.

However, microwave ovens, televisions and remotes of devices and electric shavers or drills are not known to interfere with the pacemaker.

Do I need to worry about battery life of Pacemaker

Every pacemaker sends and receives information between you and your attending doctor's office, where the doctors have the access to the data including heart rate, rhythm, pacemaker's functioning, and above all the remaining battery life of the pacemaker. Doctors are likely to inform you and it is your duty also to keep in touch with your doctor.

Important Tip
Keep your pacemaker's manufacturer details, barcode and manual handy for emergent needs. It is better to keep two sets of details of pacemaker along with the customer care toll-free number of the manufacturer and the attending doctor's contact numbers being handy and the other in safe custody.

For a better understanding of Heart Disease in Women

It is a very common concept that mostly men are involved with Heart disease. But the concept is not at all true in terms of the report of medical science. Women also may get equally affected by Heart disease. In this article, I will explain the function of the Heart, reasons of Heart disease, symptoms as well as signs of heart-failure and how it can be controlled by adopting some simple ways what women can do easily.

Know the three medical instruments related to the heart

Do you know which instruments are used for the diagnosis of heart diseases? In this article, you will learn about the structure and functioning of three medical instruments related to the heart, namely ECG, pacemaker and sphygmomanometer.

Comment from the author to create awareness among readers:

As per latest development an Indian-origin doctor in US has implanted the first miniature-sized, leadless cardiac pacemaker directly inside a patient's heart without surgery through catheter-guided procedure through groin via femoral artery. The pacemaker is 10% size of traditional pacemakers and resembles a small metal silver tube. The lead less pacemaker is reported to have the following advantages over the traditional pacemaker:

No visible pacemaker device under a patient's chest skin, no incision scar, no restriction on patients' activities reducing the number of precautions.
Dr.Vivek Reddy needs to applauded for the surgery free implantation of pacemaker.

@Ashok Goyal, Can the miniature-sized, leadless cardiac pacemaker inserted without surgery through catheter-guided procedure is available in India. If yes, at which hospitals?

No, It is not available in India till today.

An excellent and useful article for pacemaker users. My father has undergone pacemaker implant twice, first in 2000 and second in 2013. The pacemakers have functioned excellently because of the precautions taken by my father. Till date he has not used cellphones, avoided touching electrical appliances with wet hands, avoided touching electric switches and going out during lightning. He keeps the guarantee card, name of the manufacturer and the name of supplier handy in case of emergency. Other pacemaker-users must also take these precautions.

A very informative article describing the precautions that need to be followed by the patients who have undergone a heart pacemaker implant. A pacemaker is an electronic device which is very small in size. Heart block and other conditions decrease the heartbeat and pacemaker is thus implanted to bring regulation in the rhythm in such medical conditions. For its smooth functioning, every individual who has pacemaker implants should follow the precautions described by the author. Regular medical follow-up and precautions will prevent the negative impact of a pacemaker on life.

Pacemakers should be periodically checked. It makes sure the efficient functioning of the device and also that the battery is boosted with energy. These kinds of checks can be even done within the home. Doctors often give their patients a specially designed device that will enable remote follow-up. The doctor will also personally check them 1-2 times a year.

Immediately after surgery, there is a chance of wound infection. The patient should take precautions related to diet, should properly follow the intake of prescribed medications and go for regular dressing. Do not indulge in activities that require too much straining, pulling or pushing for a period of at least 2-3 months after surgery. The lifting of heavy objects, strenuous exercises and sports that require full-contact that exert stress on heart should be completely avoided.