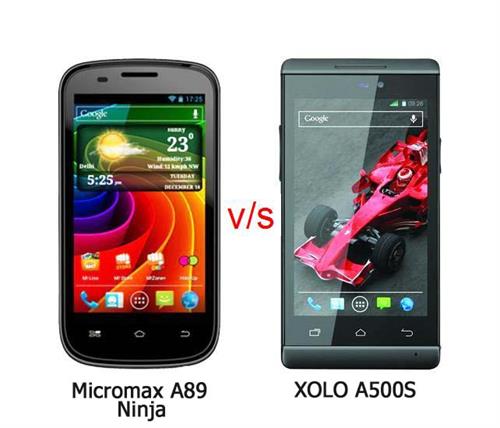 Comparing between Micromax A89 Ninja vs Xolo A500S

About Micromax Ninja A89

The Micromax Ninja A89 runs on the Android Ice cream Sandwich (v.4.0.4) and has a powerful 1 GHz dual-core processor. This Smartphone provides a gravity sensor that can change the screen orientation according to the movement of the device. The available features of this Micromax handset are Wi-Fi, Bluetooth and 3 megapixel primary camera etc.

Both are equal, Dual SIM (GSM+GSM).

Bluetooth: The Bluetooth version of Micromax A89 is v2.1 Supported Profiles (HFP) and Xolo A500S is v3.

As the users of smartphones are increasing day by day, hackers are eyed on harming them too. Here in this article I will share information of harmful malwares with whom hackers are attacking Android smartphones. Read the article and be careful while using applications in Smartphones.

Price And Specifications Of Micromax Qube X550 In India

The demand of stylish mobile handsets is increasing day by day. Thus, Micormax has launched its new touch screen handset, Micromax Qube X550, with lots of attractive and at cheapest price. In other words, we can say that Micromax Qube X550 is a gadget providing value for money.

How to uninstall inbuilt apps in Android phone?

Planning to get rid of system or inbuilt apps in your Android phone? Wondering how to delete them? In this article I have given app which will do the task for you. Read the article below to find out the application used to delete system apps.

How one smartphone has made 14 products obsolete

Do you think a smartphone has made other products obsolete? This article provides a list of 14 products that may get completely obsolete in the future because smartphones have become capable of doing things which were done by these products individually.