There is hardly any doubt left in the minds of people that Telangana as the 29th State of India will become reality in 4-5 months, as the Union Government gave a go ahead for the bifurcation of Andhra Pradesh to create a new state on July 30, 2013.

How New State will be formed

But as every conscious citizen or politician thinks, the processes that will culminate in the creation of new state of Telangana is by no means going to be a simple and smooth trajectory. The congress spokesperson, Mr.Digvijay Singh, who is also the party General Secretary in-charge of Andhra Pradesh, told media persons on July 30, 2013 that the Centre would send the congress Working Committee decision on Telangana to the State Assembly to seek its views on the draft bill after which it would go to Union Cabinet. A group of Ministers to address the problems and resource sharing of Telangana and the remaining Andhra Pradesh-the sharing of water, land, revenue, assets, liabilities and power-would then be set up. Thereafter, the Union Cabinet would ask the Union Law Minister to draft a bill that would be sent to the Andhra Pradesh Assembly for its comments. Then, the Union Home Minister would make some adequate provisions, incorporating the suggestions.

After that, the Union Cabinet headed by Prime Minister has to approved the draft bill would be sent for the approval of the President of India. After these it will come to Parliament would then have to pass the bill in both the Houses-Lok Sabha and Rajya Sabha by a simple majority. Ultimately, it would go back to the president for his approval and after that the bill come in to effect. In all likelihood, it would take so much time that bill would not be ready for passage till the winter Session of parliament.

Though Congress leader claimed on July 30, 2013 that the process could be completed in 4-5 months, the Congress Working Committee resolution was silent about any deadline. This may be on account of the fact that road ahead promised to be arduous, allowing many opportunities for anti-Telangana groups to interject and delay the process. Getting an Assembly resolution seeking formation of a separate State of Telangana would witness a sharp division in the 294-member House which dominated by 175 members from non-Telangana regions. Though constitutionally it is not mandatory to get the resolution passed, the congress may find it difficult to overlook this. We must remember that the resolution was passed for the creation of Jharkhand, Uttarakhand and Chhattisgarh. Thereafter, the resolution would move to the centre, where arduous process of resolving economic issues arising from the creation of a new state would crop up. The maximum time would, however, be consumed by the next step which would be the task of a Group of Ministers (GOM) relating to working out the details of dividing revenue, assets and liabilities, devolution of central funds to the new state as well as sharing of resources, etc. Sources close to the people at helm are said to have told the media that the administrative and Constitutional exercise will consume at least seven months time before the processes is completed and the new state of Telangana come into being.

As soon as the new about the center's decision regarding the formation of Telangana broke, all the ten districts that are supposed to constitute the new state erupted in joy. In an atmosphere of elation, people burst fire crackers and slogans like "Jai Telangana" started doing the rounds. People even took out motorcycle rallies to express their joy. But Telangana Rashtra Samithi camp was not much happy because due to the fact that Hyderabad was shared capital for 10 years. In Coastal Andhra and Rayalaseema districts, however, people express just the contrary sentiments. They were shocked and furious. Apprehensive of violent protest, security personnel moved in and leaders are kept in house arrest.

The movement the congress and the United party alliance (UPA) decided on creating of a Telangana State, the Union Home Ministry feared that it could lead to protest and long concerted agitations in parts of Maharashtra, Uttar Pradesh, West Bengal and Assam where people have been demanding for the formation of new states, That is Harit Pradesh or Paschim Pradesh and Vidarbha, Gorkhaland, Bodoland and Bundelkhand, respectively. However, the Union Home Ministry has already received a resolution passed by Uttar Pradesh State Assembly for the division of state into four parts those are Paschim Pradesh, Avadh Pradesh, Bundelkhand and Purvanchal. The other such demands raised in the recent past include Saurashtra in Gujarat, Coorg in Karnataka, Koshal Anchal in Odisha and Mithilanchal in north Bihar. Several seasoned leaders have expresses their opposition to the recent decision, as it would give birth to a dangerous trend and lead to the fragmentation of India. 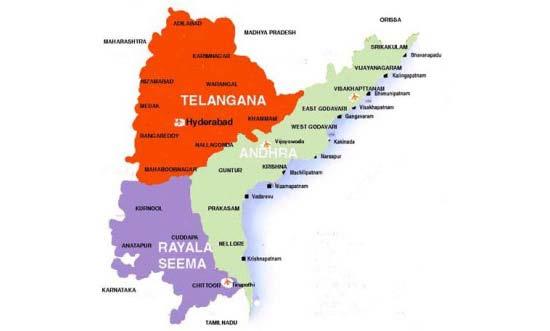 Special powers to the central Government:

With article 3 central government has the power to bifurcate an existing state and also it can change the boundaries and name of the state. This should be done by passing the bill on both the houses on the recommendation of the president simple majority will be enough to pass the bill. By using this law Central Government can do respective changes to the state. This Law was made mainly to make states according to the language from the princely states as we are in the mature state of democracy does it right that central government can do whatever it want without acceptance of state government. Mainly Telangana was dividing because of the lack of development in the respective districts. So if any state want to develop does it go for bifurcation there is a chance of misuse of Article 3 by Central Government which are ringing the dangerous bells to our integrity. Recently Andhra Pradesh Assembly rejected the T-Bill and sent it to the Union Home Ministry. Now the entire drama shifts from Andhra Pradesh to Delhi.

Anyhow what ever may be the reason for the formation of the state if they work towards the development of the country and the welfare of the people they are welcome but not in the cost of our integrity.

Article by Revanth
Nagabhyru Revanth is a professional blogger and freelance content writer from Karnataka. Since December, 2013 he is the gold level member in the India study channel. He strongly believes in Real Profiles with Real Updates to own his articles on the web with the brand name.

This article has outlined the process of formation of the new state of Telangana. As the reality of the state may not be far but this article has been posted in a hurried manner. While we should respect the long cherished dream of the Telangana people but at the same time the sentiments and the reservations of the Seemandhra people also can't be ignored. We as authors should not be a party for the politics being played at National and state level. The drama that is being taken place and now being continued at Delhi can't assure the formation of the new state very soon. Hyderabad may be declared as UT for ten years as reports are coming in. There is no guarantee that the Parliament could be able to pass the bill in this session and the next elections would lead to some more delay and confusion. Meanwhile a writ has already been filed in Supreme Court challenging the bifurcation and the plea is being heard on 7th Feb. In such a scenario, this article tends to be partial for one region.

Further, the Article 3 of the constitution has been misintrepreted and it is quite astonishing as to how ruling UPA understood the clause at the eleventh hour of their 10 year rule from 2004. Totally a politically motivated decision and not within the spirit of democratic norms. Formation of Telangana is not an issue at all but the way in which the things were handled can not be appreciated.

I totally agree with you but telangana sentiment was totally filled in the hearts of the people if they did not pass the bill in this season Andhra Pradesh will be in fire again. As you said if bifurcation happens seemandhra will be in fire. these political leaders clearly divided the people into two regions and started the game.

I am not in hurry if congress did not do BJP was ready to do they already said this thing many times because BJP did not have any roots in Andhra pradesh so they are trying to gain popularity in Telangana by supporting its bifurcation.

I think it is better to divide the state so that at least they will be happy and we do agitations for some more time as time passes we busy in the development of the state or building new capital for Andhra so that both regions will rest in peace.