The excretory system in the human body is concerned with the important functional activities of excretion and osmoregulation. Excretion is the elimination of metabolic wastes, especially nitrogenous wastes from the human body. In this process, the wastes dumped into the blood by the metabolic activities (wastes created in the cells through chemical reactions) of our body cells will be carried along with the blood to the kidney for their elimination. The structural and functional units of the kidney are nephrons. These nephrons filter the blood with impurities and remove these impurities in the form of urine. Another important functional activity carried out by kidneys is osmo-regulation i.e. maintaining a correct amount of water and ionic balance within our body fluids. If the water content in our body fluids is more, our kidneys excrete more water and vice-versa. Similarly, if salt ion concentration is more in the body fluids will be excreted by the kidneys to maintain the same steady-state (homeostasis) of the body fluids. Hormones like an antidiuretic hormone (ADH), aldosterone, and angiotensin II play an important role in the osmoregulatory functional role of kidneys. As this system is concerned with expelling metabolic wastes in the form of urine outside, this system is also commonly known as the urinary system.

What is the exact scientific meaning of excretion

Our body is made with millions and trillions of cells. In each cell at every moment, a large number of chemical reactions occur. These reactions are known as metabolic chemical reactions. In these reactions, some of them are constructive (anabolic chemical reactions) and some of them are destructive (catabolic chemical reactions) in nature. Due to these chemical reactions, various substances are formed in the cell. Some of the substances formed through these reactions are useful for the cell and some are harmful. So the harmful substances from the cells have to be eliminated periodically otherwise they accumulate in the cell and harms its functioning. For this, all the cells of our body diffuse their metabolic poisonous wastes into the blood regularly. This blood through the circulatory system will move through the kidneys continuously. During that time the filtering units present in the kidneys filter the blood and separate the impurities which will be finally thrown out from our body in the form of urine. So excretion is a process that is always concerned with the elimination wastes created out of the metabolic activities of the cell. Some times we get confused with another word 'egestion' for excretion. Egestion is a word used for the elimination of undigested food from our alimentary canal through the anus. The waste created in this process is not the waste created out of the cells. So egestion is a word quite different from excretion.

The following are the important organs present in human excretory system:- A pair of kidneys, two ureters, urinary bladder, urethra . 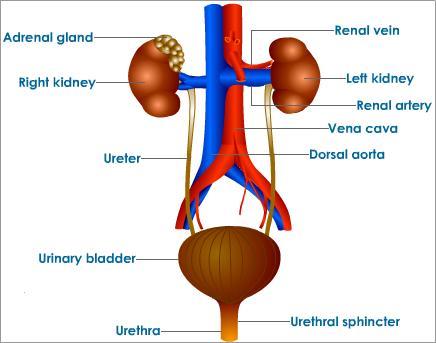 In the human excretory system a pair of large bean-shaped chocolate brown colored kidneys are present. These kidneys are present in the abdominal cavity below the diaphragm one on either side of the vertebral column. They are attached firmly to the dorsal surface of the abdominal cavity by peritoneum. The right kidney is slightly lower in position when compared to the left kidney. The reason for this is one of the heaviest organ Liver presents above the right kidney pushes it a little lower. The lower end of the rib cage bones partially covers the kidneys at the upper end and protect them partially. Each kidney of adult measures 10 cm. in length, 6 cm. in width, and 2.5 cm. in thickness. Each kidney roughly weighs 150 grams. Each kidney is composed of roughly one million nephrons which are the basic structural and functional units of the kidney.

Each kidney is having an outer convex surface and an inner concave surface. On the inner concave surface of the kidney, a depression or notch like structure present is known as hilum or hilus. This is the region through which the ureter, blood vessels, and nerves enter as well as leave.

A pair of renal arteries which arise from the major blood vessel Aorta of the body each one of them enters into a kidney through the hilum. The renal artery supplies oxygenated and metabolic wastes loaded blood to the kidneys. Similarly from each kidney, a Renal vein leaves through the hilum and joins the major vein Vena cava. The renal vein carries deoxygenated blood without metabolic wastes from kidneys to outside into the Vena cava. The blood from the whole body passes through the kidneys 350-400 times a day at the rate of 1-2 liters per minute.

From each kidney arises a thin long muscular tube of about 30 cm. in length. It arises from inside the kidney, runs downward and from behind the urinary bladder opens into it through a slit-like an aperture. The well-expanded part of the ureter inside the kidney is known as Pelvis.

Urine from the kidney drop by drop reaches the urinary bladder by the peristaltic movements of the ureter.

It is a large muscular sac-like structure present at the lower end of the abdominal cavity. The two ureters which arise from the kidneys are connected to the urinary bladder. This large sac-like structure stores the urine temporarily till it gets completely filled.

The elimination of urine from the urinary bladder to the outside through the urethra by the relaxation of the sphincter with the help of nervous impulse received is known as micturition. In normal healthy people under normal conditions, 1.8 to 2 liters of urine will be excreted daily. The amount of urine eliminated in an individual depends upon the lifestyle of a person and the amount of water consumed in a day.

Here is the video of Human excretory system:-

We have learned many things in our school science classes. We have read, we have heard and we have written the answers in examinations. However, we realise the practical use of such science class learning only when we reach a certain level in our adult life. At that time we would yearn to look back into our school texts to refresh our knowledge, especially some of which we have now have a vague recall only.

It is in such situations that the purely academic articles like the one here on "Human excretory or urinary system" appear very valuable to us. We will then try to correlate and find relevance to something like the last urine test conducted, or the discomfort we feel somewhere in the lower abdomen etc.

Nice write up about an important organ system of our body. The good anatomical description will help us to understand the functions of kidneys and how urine is formed and sent out of the body. Given its importance in day to day excretory function, we should avoid taking too many painkillers (brufen,voveran, combiflam etc) as over a period of time it damages the kidneys leading to chronic renal failure. Similarly, if people with high blood pressure are needing more that=n 2-3 types of tablets a day, it's worthwhile to check that kidneys are not the culprit (renal artery stenosis related hypertension).

A nice article explaining in simple and interesting language regarding the excretory system of human body. As well said, our body is a miracle of nature. It is composed of so many vital parts and each has its own importance and functionality.

It is amazing to see that there are so many chemical actions going on in the body and the energy and nutrients are absorbed in one way or other while the unwanted or waste products are excreted away through the excretory system.

I just want to add that when there is some ailment or problem in the body, then by pathological testing of these excretions the doctors get a lot of information regarding the possible type of illness or disorder in the body. To that extent medical science takes advantage of abnormal or out of the limit signatures of certain chemicals in excretion. Even the behaviour of excreting organs is useful in disease detection.