A country goes to war with another, not for security, not for annexation, not even for proving its power, but for principles; principles that she believes in. This includes principles of liberty, freedom, equality, democracy and peace. And this is done with lot of will. It was in the year 1971, the Bangladesh liberation war, when India had proved its mettle to south Asia and emerged as a major regional power. It is 2016 now, the time has changed and the wars have changed. 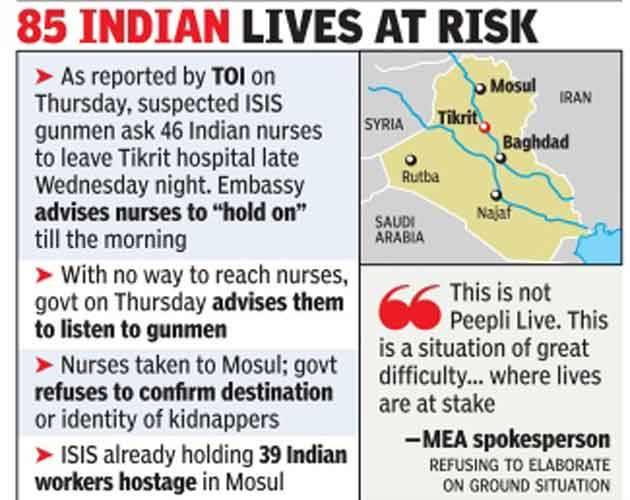 Today, the world stands on a battleground arms against a very powerful enemy, the ISIS. What should India do at this point of time? Should it stand aside and watch as hundreds and thousands are killed and yet just mortally condemn.

India's aspiration for a permanent seat in the UNSC have been very open. Amidst murmurs of a more representative security council, India has been heavily lobbying for a permanent seat. The question is "Does India have shoulders strong enough to carry this baggage of responsibilities. What has India done so far to justify its demand for a permanent seat? It is like a child asking for beer who can't even suck a lollipop.

The ISIS is spreading at a dangerous pace. Should India not seize this opportunity that could propel its military and economic status in the global arena and justify its demand for a permanent seat? This is just the right time for India to showcase its power and plunge herself into a direct war against ISIS. Going into a direct war against ISIS would bring India to the foreground and make the world believe that we too matter, that we too can decide the fate of the world and that we too can change the course of history. A direct battle whatever the consequences be would send a message to the world that we are unafraid ready to take on anything and anyone.

Would a direct battle not put India on the ISIS radar and make it vulnerable? The answer is, we are always on the ISIS radar no matter what, with the third largest Muslim population, India has become one of the epicenters for ISIS recruitment. Recent Bangalore incidents prove the same. Next, one might ask if we are militarily equipped to fight an enemy of this magnitude? Yes, we are because we are the largest importer of arms and ammunition in the world. And all claims regarding how powerful ISIS is cannot be proven. Media has been very generous with numbers. Then again, one could argue if there's any need to fight an enemy so geographically removes? If UK can go 13000 kms far off to stand for its people in Falklands, why can't India take on any enemy just 3000 kms away.

The permanent members of UNSC having been raising a serious war against ISIS. Russia has declared operation complete destruction against ISIS. France has been bombing targets in Syria and has intensified the bombing post the Paris attack. US military has recruit local forces to fight the ISIS. And India has been busy deciding what suit to wear when head of permanent member state visits. The actions of the permanent members put them on a different time. These are superpowers in the truest sense of the word, unafraid, uncompromising, unwavering. Can India claim to be at par with these nation by staying away from taking military action?

Imagine our parents being blown off as you are dragged away with gunmen. Imagine wives cry and shout for help as they are raped. Imagine, you being forced to take to the sea in a boat that you know shall capsize. Would you be able to tolerate all this? 24,000 killed, 1.8 million left to wander homeless, 12 years olds given guns to fight enemies they do not know of. These are not mere number or statistics or figures in a newspapers. These are mothers who have seen their children bleed to bullet and kids who has been unable to recognize the blown off limbs of the parents. Now, its upto us to decide if already enough has been done or we need more before we take charge and stop to genocide.

Why the author is singling out India to fight alone against the ISIS. It is the International problem of terror being faced and every affected country must cooperate and coordinate with like minded countries and combat the surge of ISIS to infiltrate in various countries. The Intelligence departments must work over time to find out terror modules operating in different names and how secretly they are giving training and preaching to young minds to fan out and that kind vigil must be escalated against ISIS to have total control on their fanning out. Unemployed youths are the easy target for that outfit to lure them with money promise and thus youths must be safeguarded against such activities. The government must provide immediate job opportunities to the vacant youth of India so that they wont divert their minds to destructive activities. On the other hand they should have control on cyber contacts through which ISIS is recruiting many youths for its targets and the police and Military should be ever vigil on this menace.

An excellent and logical article from the author. Islamic State in Iraq and Syria (ISIS) is the enemy of entire human civilisation. Every right-thinking person should join the fight against ISIS. The author has rightly pointed out that considering India's growing stature in both political and economic arenas of the world, India must actively take part against the ongoing fight against ISIS. Furthermore, India must think about the following three facts in this regard:-

(a) Lone wolf attacks in India: ISIS has been true to its word. Recently India has witnessed more than one lone wolf attacks against the railway establishments within the country. The investigation suggests that these were done as warned by ISIS earlier.
(b) Muglisthan project: The Mughalistan project is a plan to create an undivided Islamic nation stretching from Pakistan to Bangladesh. It will connect Pakistan to Bangladesh with a Muslim corridor stretching through the length of North India. ISIS is actively involved in its implementation.
(c) Ghazwa-e-Hind: Ghazwa-e-Hind would be the largest and final Islamic conquest on India in particular and the general subcontinent as a whole. This has been mentioned in a Hadith. ISIS firmly believes in Ghazwa-e-Hind.

Due to the aforestated three reasons, India must join the fight against the ISIS. It is a must for India's integrity.