New Zealand, situated down under and an immediate neighbour of Australia and the pacific islands Fiji, Tonga and New Caledonia has always been a favourable location for international tourists. The scenic surroundings in and around New Zealand, the numerous islands, picturesque mountain peaks, lush green rain forests, beautiful lakes and extensive coastlines add to the beauty of the place. The country is prosperous, a modern economy and is considered part of the developed world. The people here enjoy a high standard of living and the country ranks high in the human development index. 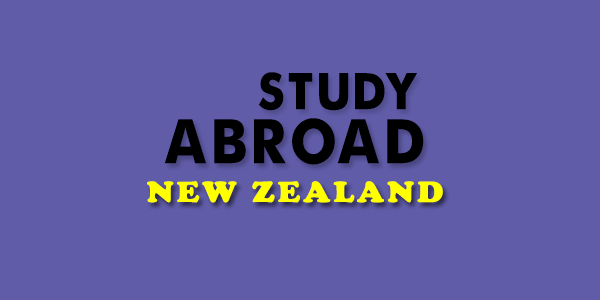 
Immigration to New Zealand is almost a hassle-free experience, unlike to countries like the United States and the European countries. The government is focusing on foreign students and making it easy for students from countries like India and others to get in New Zealand for studies as well as for permanent residency. It's no wonder more than 1,00,000 people from around the world go to New Zealand for their studies every year. Every year the number of foreign students are increasing by almost 10%. An amazing feat for a small country like New Zealand. Indians students form more than 15% of the foreign students population. The advantage of English language gives a head-start to Indian students. So give New Zealand a serious thought, if you have plans for studying abroad for higher education.

New Zealand offers the best avenues for your plans to study abroad. Simplicity of the application process smoothens the road for your overseas study procedure. Find all the information you need to apply for a Study visa for New Zealand successfully.

Best Countries to Study Abroad besides UK and USA

Singapore, Hong Kong, New Zealand, Canada and Australia are emerging as popular destinations for Indian students seeking to pursue higher studies abroad. Find out all you need to know about these higher education destinations and what they have to offer.

Study abroad at a world class university in New Zealand

New Zealand has eight top universities, all of which feature in the top 500 of the QS World University Rankings. All of them are very popular with international students, especially from India and China. Through this article, get to know more about them.

All About Studying in New Zealand

New Zealand is emerging as a popular destination for Indian students studying overseas. While the education in the country is internationally recognized, its high standard of living is another aspect that attracts international students. Find out more about study abroad in New Zealand.

A really useful article for prospective students. New Zealand is one of my top favourites for overseas education.

Although the weather is considered to be little harsh (here I differ with the author), the country is one of the most beautiful countries of the world. New Zealand has a lot to offer for international students. Visa is granted liberally and the life-style is very easy and less competitive. University of Auckland and University of Otago feature among the top 200 world universities. Cost of living in New Zealand is moderate and the tuition fee is reasonable compared to other developed countries. Needless to say that the medium of instruction is English. The job prospects in the country after completion of education is also great because of very low population density. Adequate opportunities of sports and recreation are available in the country. The peaceful country does not have major law and order problems. As a result of these positive aspects, nowadays increasing number of India students are going to New Zealand to pursue higher education.

However, I feel that another para on cost of living in New Zealand would make the article more useful for Indian students and their guardians.