Jaipur, the capital city of Rajasthan, was founded in 18th November 1727 by Maharaja Sawai Jai Singh II. During his ruling of the Jaipur State from 1699 to 1743, he decided to shift his capital from Amber to Jaipur due to growth of population and scarcity of water there. He planned this city with the help of several books on architecture and designed the layout of Jaipur with the help of a Bengal Scholar Vidyadhar Bhattacharya. It became the first planned city of India.

The city was fully planned according to Vaastu Shastra and it took around 4 years to complete the main roads, junctions and buildings. The city was divided into nine blocks; two for the kings and seven for the local people, with high security walls surrounding to it. The city was fully set up on 18th November 1727.

In 1878, when Prince of Wales visited Jaipur, all the buildings were painted in pink colour for his greeting; the system sustains till now, due to which Jaipur is also called as 'Pink City' of India.

Geographical and Physical Features of Jaipur

Population: 66, 26, 178 (as per 2011 census); 10th most populous district in India. However, it is about 80 lakh as per non-official record that includes migration for employment and tourists. Commonly spoken languages in Jaipur are Hindi, Punjabi and English.
Literacy: 76.44%
Area of Jaipur District: 11, 146 Sq. Km
Climate and temperature: Jaipur is humid subtropical climatic area with 650 millimetres rainfall every year mostly during June to September. Highest temperature in summer is 45 degree and lowest in winter is 5 degree. Best season for travelling is in between November to February of every year.

Fairs and Festivals in Jaipur

Jaipur is not only a place for tourists; but also a beautiful place of beautiful people with some religious fairs and festivals since decades. Some of the most popular and must celebrated festivals in Jaipur are:

Celebrated in the month of Chaitra as per Hindu calendar i.e. in between March and April. It is a Hindu festival for women, where they worship to Lord Shiva and Parvati. The name Gangaur itself means 'gan' as Lord Shiva and 'gaur' as Goddess Parvati. Both married and unmarried women do puja in this festival. Unmarried girls worship for good husband; whereas married women pray for health and wealth of their husband. It is a traditional festival during which a procession starts from Zanani Deodhi of city palace and ends at Talkatora, with various performances by folk artists, palanquins, chariots, carts, music and dances.

It is one of the most famous festivals in India and people in Jaipur are waiting for this to participate and enjoy with their family and friends every year. Not only for local, people outside from Jaipur also came and participate in Teej festival of traditional songs, dances and music. On this day, women and young girls do wear new clothes like leharia, ghaghra and perform puja to Goddess Parvati. Some of the famous sweets in this occasion are Ghevar, Feeni, etc.

One day before Holi (i.e. during February-March on a full-moon day) or Phalguni Purnima, Elephant Festival is celebrated in Jaipur City. Elephant is significant to Lord Ganesha, and it is believed that worshiping to Lord Ganesh anything before doing is very auspicious; due to which Ganesha is being worshipped first in any puja in India. The mahouts give complete bath to their elephants, put colourful cloth and ornaments and flowers on the body of elephants and take them on the procession. The look gives a royal impression and it is an interesting festival to attend and watch.

The most popular kite festival occurs on Makar Sankranti on the month of January; particularly on 14th January of every year. Many political leaders, tourists also participate in this kite festival by flying their kites in competitions.

Historic and Tourist Places of Jaipur

Jaipur is one of the most historic places in India and it was ranked the 7th tourist place in Asia. Jaipur was a place for kings and maharajas for centuries. There are many royal houses, historical places in and around Jaipur. If you're new to Jaipur and want to know some of the historical and tourist places that you want to visit know them here. 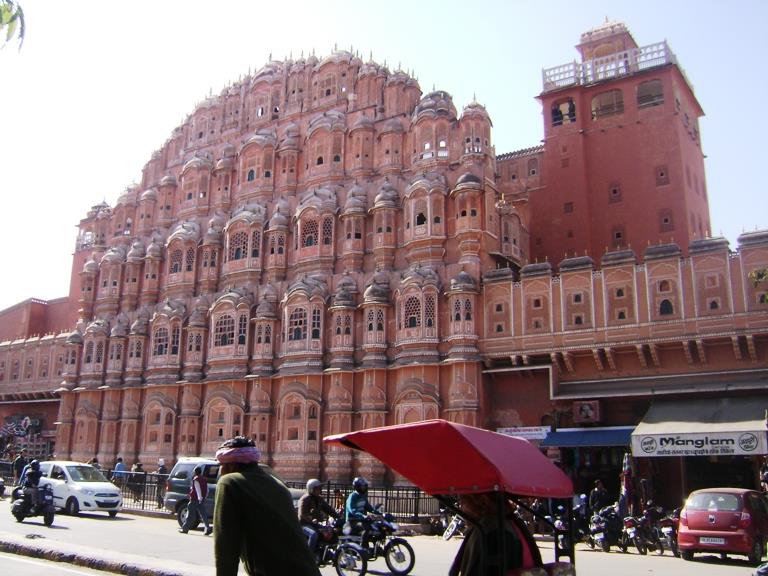 The five storeyed pink building was constructed for royal women to watch the open market and enjoy the festivals in streets through the big latticed windows. The royal building was built in red and pink sandstone by poet king Sawai Pratap Singh and designed by Lal Chand Ustad; it was completed in 1799.

The old royal palace, now a museum is a historic landmark of Jaipur City. The building is build up with grey-white marbles and coloured stones. It is now a museum with various collections of Rajasthani Saris, dresses, royal costumes, weapons of Mughals and Rajputs, huge collection of royal paintings, carpets, and some astronomical scriptures of Sawai jai Singh II in Sanskrit, Arabic, Persian and Latin. 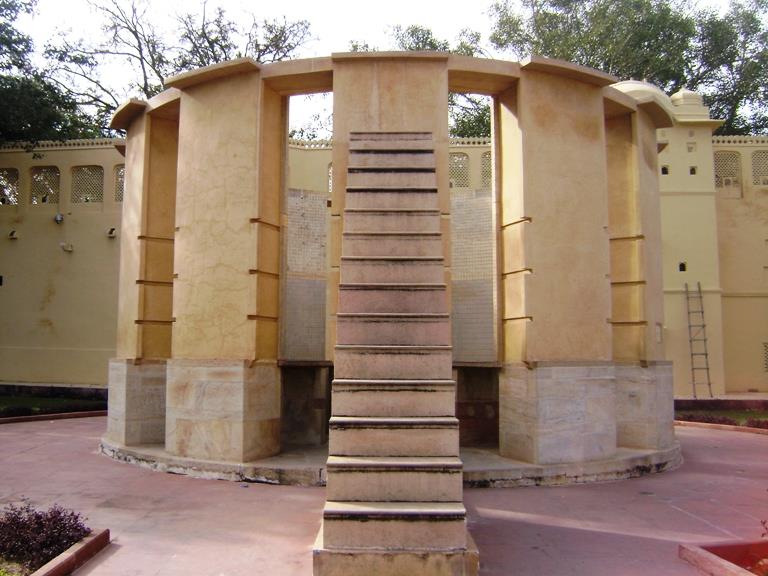 It is an UNESCO world heritage site mostly popular for medieval Indian astronomy. It is one of the five observatories of Jai Singh in Jaipur. The instruments here are made up of and set with stones, brass and marbles; with the largest stone sundial (Vrihat Samrat Yantra) in the world.

Also called as Amber Fort was a city Amer on hill top just 11km from Jaipur. The city was actually built by Meenas (a tribe group) and later ruled by Raja Man Singh from 1550 to 1614. The area is about 4 Sq. Km with fort and a beautiful palace with gardens, temples, and pavilions made up of with red sandstone and marble. Amber is named after the local god Ambikashwara, which refers to Ambika (Durga) and Eshwara (Shiva). It is one of the most prominent tourist destinations in Jaipur.

The Water Palace is located in the middle of Man Sagar Lake in Jaipur City. It was built in 18th Century by Maharaja Jai Singh II of Amber. It is a romantic place in Jaipur. One can watch it on other side of the lake also.

It is one like Amber Fort and Jaigarh Fort of Jaipur. It is ruining but popular for tourist due to its beautiful crafting and structures. Some of the famous movies like Rang de Basanti and Sudh Desi Romance were shot here. Maharaja Sawai Jai Singh II built this fort as a place of retreat on the edge of Aravalli Hills.

The temples, beautiful water tanks, pavilions and monkeys are the attraction of Galtaji; which is a Hindu pilgrimage. It is situated at Khania-Balaji, just 10 km ahead Jaipur. The sun temple here was built in 18th century. The monkey temple/ Ramgopalji temple is famous due to presence of large number of monkeys, those who're deserted from there.

It was built in 1726 to protect the Amber Fort at hill of eagles (locally said as Cheel ka teela). The palace is one of the few military structures of India with several temples like Laxmi vilas, Lalit mandir, Vilas mandir, Aram mandir etc., palaces, reservoirs, gardens, a cannon foundry and an armoury museum (of some swords, guns, muskets, cannonball, collection of stamps, royal photographs, paintings, and other artefacts' etc). The giant cannon on wheel 'Jaivana' is largest in the world, which can throw 50 kilo cannonball to 22 miles.

It is one among several Birla Temples in India built by Birla group of industries. The large temple was built in 1988 where Lord Vishnu Narayan and Laxmi is being worshipped. It is one of the famous tourist destinations for Hindus in Jaipur. However, other community people can also visit there and watch the illustrations of other religious and historical persons like Christ, Buddha, Confucius, Socrates, Zarathustra.

Other tourist destinations in Rajasthan: Jodhpur, Jaisalmer and Udaipur 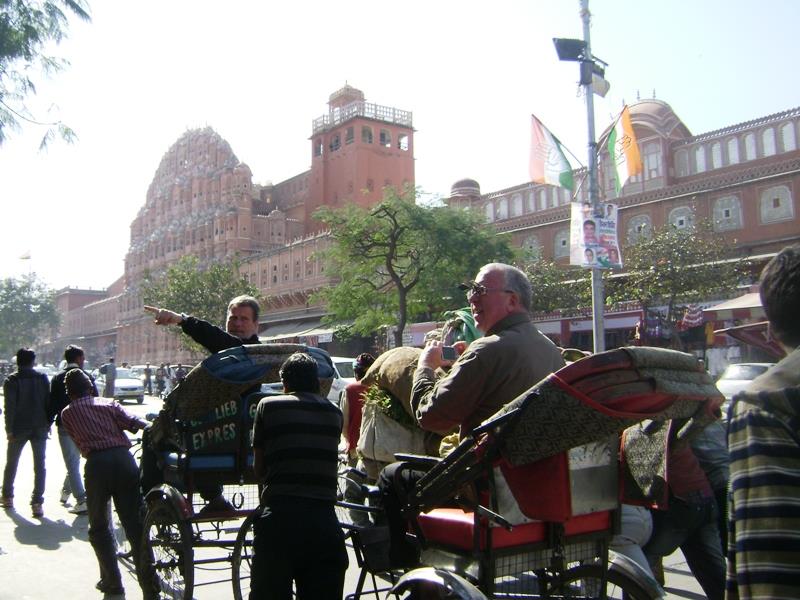 Jaipur is headquartered to North Western Indian Railway Zone (260km from New Delhi, 240km from Agra), which is well connected to all major cities towns and places in India. Special trains from Jaipur are, Pink City Express, Shatabdi Express, Jaipur-Delhi Double Decker, etc. Jaipur Metro is expected to inaugurate by 2018.

Jaipur BRTS operated by JCSTL, which has more than 400 regular and low-floor buses in Jaipur. NH8 from Jaipur is connecting to Delhi-Mumbai, NH12 connects Kota and NH11 to Agra-Bikaner.

Famous Hotels and Resorts in Rajasthan 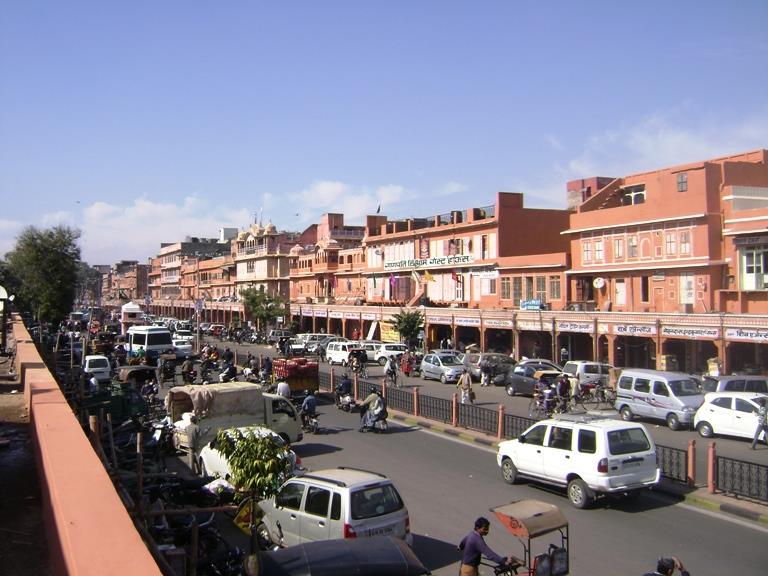 Article by Naresh Kumar Behera
Having more than 12 years experience in content writing and member of ISC since 2011, Naresh Kumar is an MBA Graduate with hobbies like reading, travelling, photography, singing, writing stories and poems etc.

A trip to Rajasthan: the city of sand

The city of Rajasthan is famous for the dignity, pride, and magnificence of Rajputs. It is also well known for the valiant accounts, folk lore and local tasty culinary.This is a place of huge tourist attraction for both the Indian as well as the foreign tourists. The sandy soil and desert here have their own unique importance. This is quite an experience of a life time touring the places of tourist importance of Rajasthan city. Let’s wade through this article to tour this beautiful place.

Undoubtedly, travel gives unbelievable, indescribable and immense pleasure and the author entertains the readers of this article by exploring an online travel guide to Mount Abu, green oasis of Rajasthan and the places to visit Mount Abu hills, ‘Switzerland of Rajasthan’ and a list of hotel accommodations for stay at the hills at her best.

A Travel Guide To Dubai

The name of Dubai is famous not just in India but also the world over. People these days are very much interested in traveling to Dubai or working there. There are a number of factors which make make Dubai a must visit for anyone planning to go on a tour. In this article I will mention these factors and review Dubai as a Tourist Destination.

In this article I have compiled some information about auspicious festival Makar Sankrani which is celebrated across the country with lots of gaiety and splendor. Through the write-up I want to give a glance of various arresting cultures and customs of different States to celebrate this grand festival Makar Sankranti. In different regions this festival is known in their regional names and people celebrate this religious festival amidst of fun and merriment.

This article gives an insight of the blue city Jodhpur. Jodhpur is a very famous city known for its forts and culture it has. The city is not that large as compared to other city and driving here is a comfortable option. Very less crowd is there in this city of Maharaja. Let’s see more about this city in this article.

Just almost adjacent to the Birla Mandir, there is a very famous Moti Doongri Ganesh temple at Jaipur. God Ganesh is considered as the God of auspiciousness in Hinduism as well as God of wisdom, knowledge and wealth. Thousands of Jaipurites start their day with the Darshan of God Ganesh of Moti Doongri temple in addition to the many tourists who visit the temple daily to have darshan.
Regarding shopping, Jaipur is famous for its 'rajais' (a type of light quilt stuffed with cotton) and Sanganeri print textiles.