The Lifeline Express (also known as the Magic Train of India) is a hospital train. This train hospital started on 16th July 1991. It is run by the Impact India Foundation in collaboration with the Indian Railways and Health Ministry. The Lifeline express was started to provide diagnostic, medical and surgical treatment for poor disabled adults and children of inaccessible rural areas in India. It get funds from international charitable sources, Impact UK, Indian corporate houses and individuals.The information should reach to the poor masses so that they can be benefited from this social service and they can feel some happiness in life. 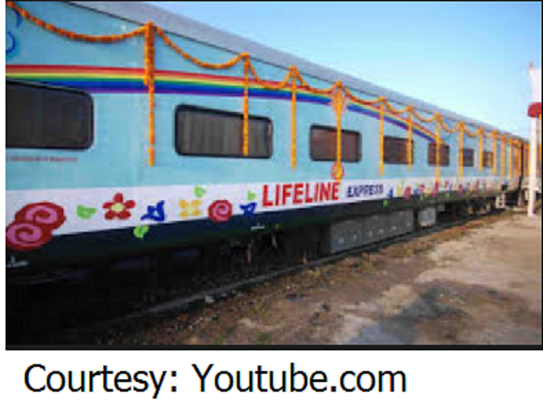 An International Initiative was launched through a UNO' General Assembly Resolution, by the Government of India in 1983. It acts in partnership with the Government, corporate sector, Non Profit Organisations (NGO), professionals and the community in mass health projects, using existing delivery systems and available infrastructure. Today, Impact is active in twelve countries. Impact India Foundation was founded in 1983 by Mr AH Tabbacowala. Its aim is to provide curative services to people suffering from various kinds of disabilities.

It has the following services-


Infrastructure and facilities available in the train

The train has specially-designed air-conditioned seven coaches. The train has two surgical operation theaters with three plus two operating tables, a sterilization area, two recovery rooms for patients, on-board power generators, a pantry car, storage for medical supplies, and accommodation for medical staff. The train has an ophthalmologic testing room, a dental unit, a laboratory, an X-ray unit and an auditorium with a large LCD display unit. The train also has two special coaches for cancer surgeries. 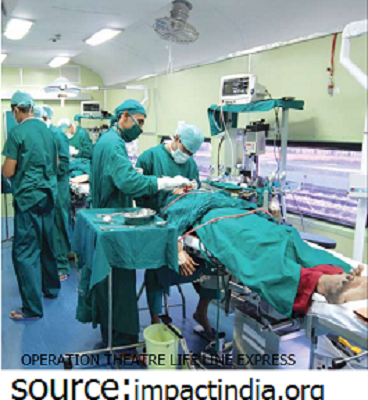 (source: https://www.impactindia.org)
"Human sufferings can be remedied by the efforts of philanthropic organizations. As long as we don't see the image of God in every individual, human sufferings shall continue. I hope Impact India Foundation will continue in the compassionate service of the people."
– Mr. S.C. Jamir, Governor of Maharashtra, May 12, 2009

"Dreams come true but seldom; the arrival of Lifeline Express in Farrukhabad is definitely such a moment. A big step for me and a big leap for Farrukhabad…I too leave my heart behind but move on with a fortified soul. Thank you."
– Mr. Salman Khurshid, Member of Parliament, Minister for Water Resources with additional charge of Minority Affairs, November 20, 2010.

"I am personally aware of the fine work of the Lifeline Express in remote parts of rural India through the involvement of Rajiv Gandhi Foundation in its projects. …It is a matter of particular satisfaction to me that Impact India Foundation is now embarked on a comprehensive project intended to significantly improve the health and welfare of over one million tribals – with special attention to women and children in the least developed areas of Maharashtra"
– Mrs. Sonia Gandhi, Chairperson, United Progressive Alliance and President, Indian National Congress, February 28, 2008

Article by NK SHARMA
I am Mechanical engineer with MBA and M Phil degree. I have a passion for reading and writing. I enjoy in sharing knowledge with people.