As per CAP / CRP official website and its announcement, this is the time to get Admission done since admission for CU affiliated colleges are already begun very recently and CU UG Degree classes may start soon. Candidate who had appeared for the same can check their University of Calicut CAP UG Degree third and final allotment results list and take admission from this week onward and it closes afterwards to commence the UG Degree first year classes soon. 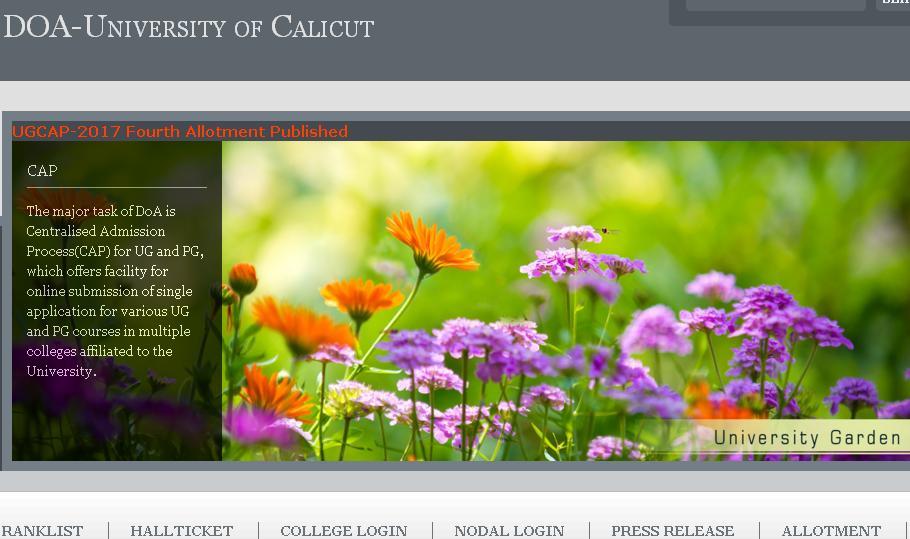 At the moment, candidates who have appeared for UG Degree admission in Calicut University under various Quota can also login and check their status by using CAP ID and Password etc. at Calicut University. The student has to keep ready the Reg Number and other detail as stated below to know ohw to login for various Quota through CAP website and then follow the given steps below.

It is expected that Calicut University will commence the classes from first week of July 2017 for the academic year 2017-18 for UG Degree courses. Thus students are requested to follow the guideline given by CU / CAP 2017. Students who got first and second allotment of Calicut University (Centralized Admission Process) CAP 2017 results and ranklists for UG Degree admission 2017 should pay the mandatory fee to confirm the present allotment and seat, this instruction is also for whom that got third and fourth allotment result recently.

The following Courses are not included the CAP 2017-18:

University of Calicut CAP 2017 and its Important dates are given in the fourth and third allotment announcement recently, candidates can check the same on time for the admission in UG Degree First year in Calicut University affiliates and its official PDF URL given.

Candidates can also get the information such as various Quota Admission and its Last Date Extended and other quota Seats in College etc. Kindly check the official website of CAP at http://www.cuonline.ac.in/ for more detail.

Note: If you are qualified students for admission in UG Degree in any reputed and affiliated Kerala University thru UGCAP 2017 then you need to submit the relevant documents mentioned as follows;

Sport allotment for SC/ST Candidates will be done at the office of the Directorate of Admissions, Tagore Nikethan, University of Calicut, Kerala. Related Schedule will be published later.

UGCAP 2017 fourth allotment detail can also be found at http://ugcap.uoc.ac.in/.

Hope the above information helps the students.

Here you can find the details about the Tamil Nadu 12th standard plus two results 2013 On line which is getting released on 09.05.2013 and how to get them through on line and mobile for the exams conducted during the month of March 2013.

How to check or know CBSE plus two (+2) exams results?

Want to know your NEET - 2016 results for medical courses? This article provides the details of where to check the results online of the second phase of NEET-2016.

Want to know the results of ICSE class X and ISC class XII exams 2018? Here you will get the information on the dates when the 10th and 12th std. exam results will be declared by CISCE. Go through this article to obtain the online procedures to find out the results from the official website.