Recently I attended an 8 PM evening perfo the iconic Broadway musical CATS with three close friends. I personally loved this show! World-renowned composer Andrew Lloyd Webber has created a beautiful and very memorable musical production. Initially, CATS was on Broadway from October 1982, until September 2000, and is the 4th longest running show in Broadway's history. CATS has been staged in more than 30 countries with translation into 15 different languages. The current New York production is a revival with a limited engagement from July 31, 2016, until December 30, 2017, so buy tickets while available.

CATS is presented at the Neil Simon Theatre, 250 West 52nd Street in Manhattan. Constructed in 1927, this quaint old theater near Times Square has been well-preserved with impressive architectural features. My friend and I walked from Grand Central Station to the theater, about a 20 minute leisurely stroll, while enjoying the sights and sounds of "the city that never sleeps". The theater is also easily accessible by taxi, subway, bus, Uber, and Lyft, Our seats in the theater's rear mezzanine were very comfortable and the stage was easily viewed even without the binoculars we brought. Refreshments and play souvenirs are available for purchase.

How is the CATS show?

CATS is based on the writer T.S. Eliot's 1939 work titled "Old Possum's Book of Practical Cats". In this show you will be mesmerized by actors dressed in elaborate cat costumes of many colors, a stage featuring an oversized junkyard set littered with all types of garbage, mystical stage lighting, intricate choreography, and Lloyd Webber's unforgettable musical score highlighting the poignant and lovely song "Memory". The show's duration is 2 hours and 20 minutes with one intermission during which time the audience is invited on stage to examine the junkyard set, meet some of the actors, and take photos. A musical play in two acts, CATS begins with blinking cats' eyes at the bottom of the stage which then spread across the stage as the musical magic immediately commences. The play tells the story of a group of cats known as the Jellicles. On one special night of the year the Jellicle cats emerge in the junkyard for the Jellicle Ball. These various cats with names like Rum Tum Tugger, Skimbleshanks, and Grizabella, among others, relate their life stories to their beloved, wise leader - the cat known as Old Deuteronomy who must then make the difficult decision about which cat will ascend to the Heaviside Layer and thus be born again into a completely new Jellicle life. 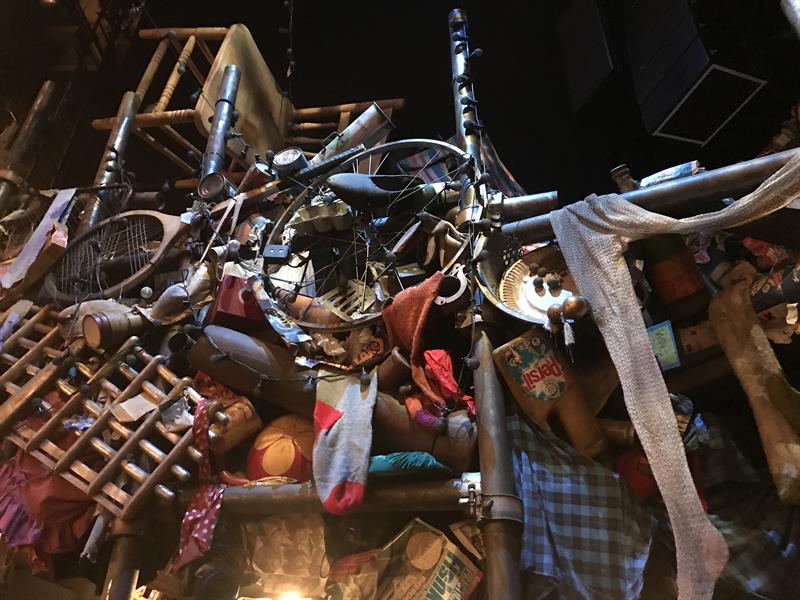 Below is another photo of stage which is made of junk - 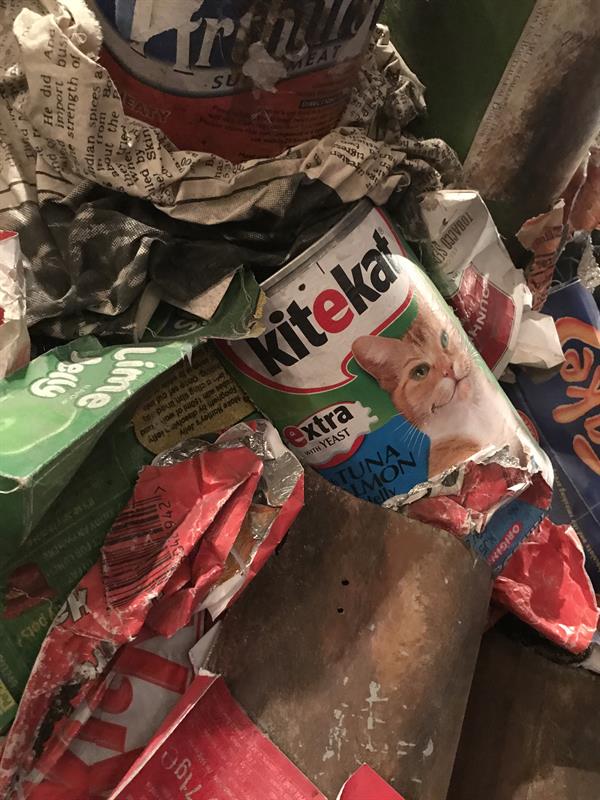 Fun at the CATS show

I loved so many things about CATS! Several times during the play, the actors dressed as cats entered the audience area and engaged the theatergoers. If you know about the Indian Diwali Festival then you may feel as if you were celebrating it during this production. Lights of different colors were spread across the theatre and were very reminiscent for me of the vibrant ,colorful Diwali Festival. As mentioned earlier, during the intermission, audience members were encouraged to come on stage to take photos which two of my friends did. Some photos I took are attached here. Bring your camera to the show but remember that it is prohibited to take photos during the actual production. If you like cats, as I do, after watching this show you may remember cats which you have either owned or seen before. One feline from CATS reminded me of a cat owned by friends who live in the finger lakes area of upstate New York. Here is a photo of that adorable kitty. 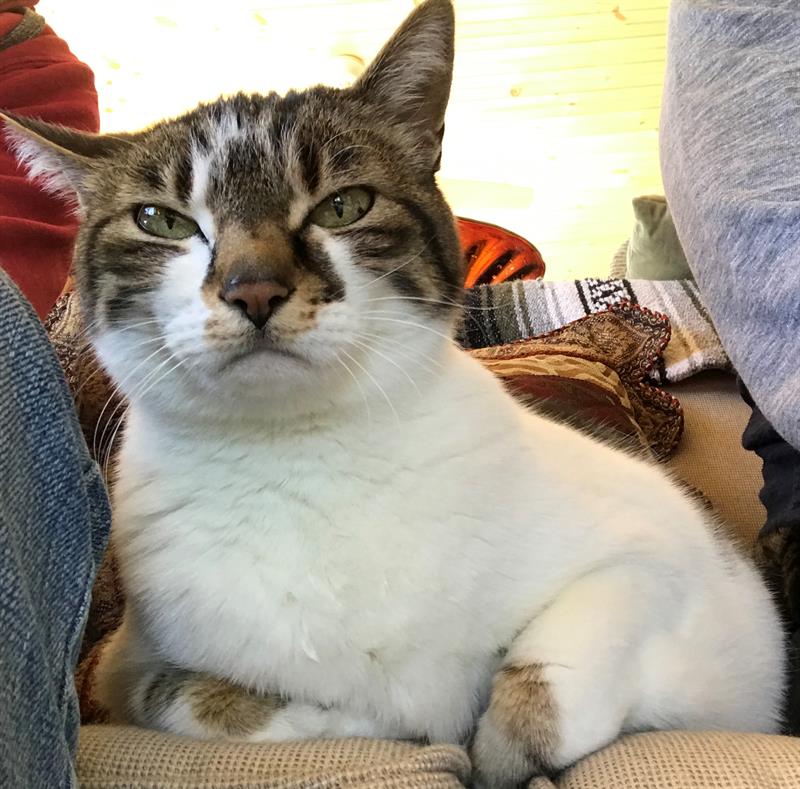 What things you need to bring with you

What are the restaurants nearby?

There is no scarcity of restaurants of all types in New York City. One recommendation is Ellen's Stardust Diner at 1650 Broadway. Popular with tourists, this is a fun restaurant with singing waiters and waitresses who aspire to careers in show business. It is open daily from 7 AM until midnight and offers typical diner food. Another suggestion: if you are a street food lover like me then you should not miss this in New York City. Various types of delicious cuisine are offered from food trucks and wagons.

The CATS show poster is very simple in design. It features the name CATS with two mesmerizing cats eyes. 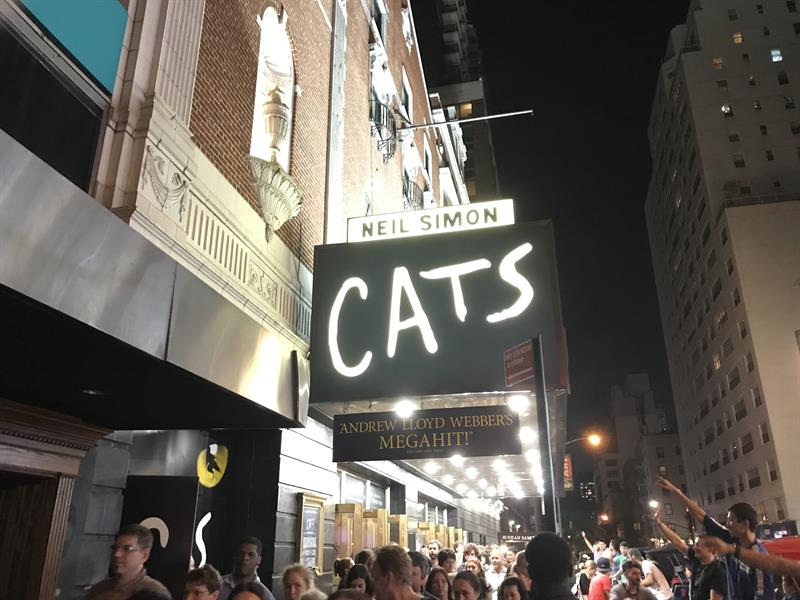 CATS is beautiful! I highly recommend that you see this show with your family and friends.