Just like banks and other financial institutions, post offices provide for various kinds of investment opportunities. One can have a savings account, a MIS or monthly income scheme or a term deposit. Some of the popular term deposits offered by post offices are the KVP or Kisan Vikas Patra and the now defunct IVP or Indira Vikas Patra. The MIS and the term deposits have been hugely popular with the masses as they provide handsome returns on investment. The monthly income scheme is most popular among the retired classes. It provides for a regular income to people who don't have any other source of income. One good thing about these postal schemes is that there is a provision for enrolling a nominee who can later make claim to the funds after the depositors have passed away.

In the following lines we will discuss how a nominee has to proceed with the claims in case the depositors are no more. The procedure of making a claim in a post office is a bit trickier than that of making claims from banks. The article Claim settlement of deceased accounts guides nominees for making such claims from banks.

Things essential for making a claim

Procedure for filing the claim


For the benefit of our readers, I am attaching the format of the documents that are to be used for submitting the claims. The first one is to lay claim to savings and MIS accounts and the other one for claiming term deposits like KVPs. There are minor differences in the 2 formats. The details of the witnesses are to be put at the bottom of the forms. The formats can be also had at India Post Forms. You may even type them as per the given format. 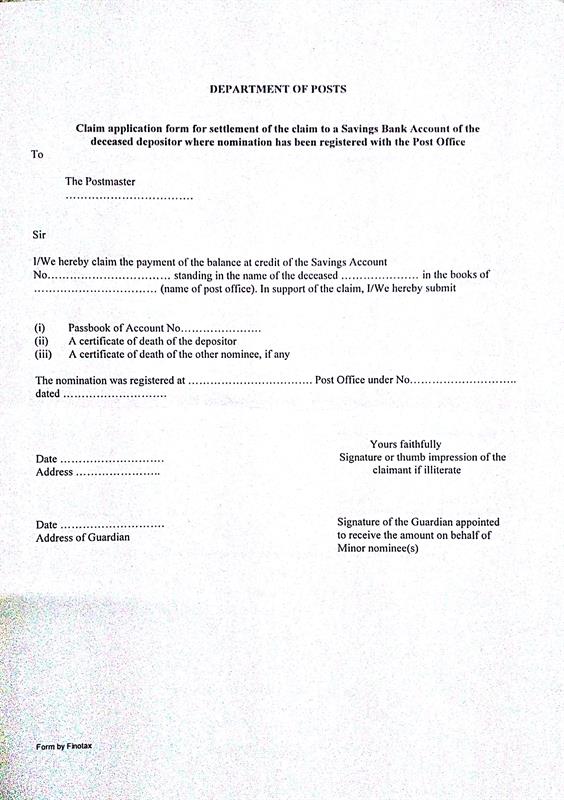 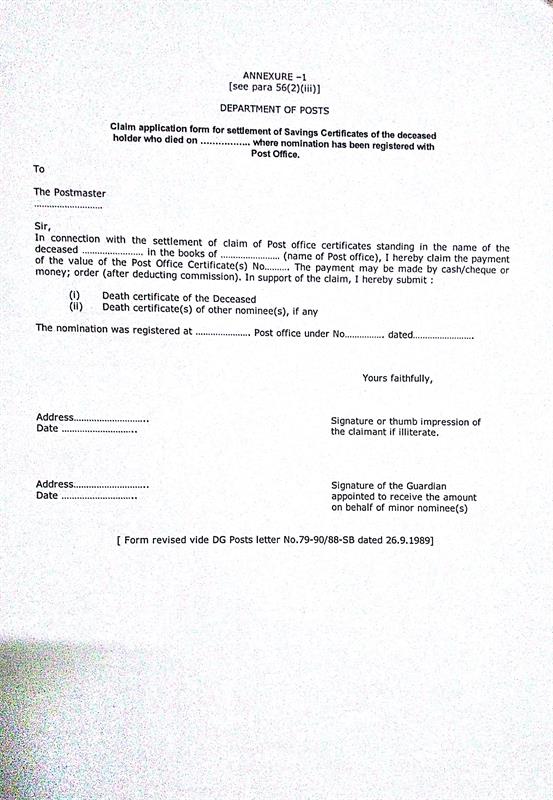 In a nutshell – The key points


As per my experience, some post offices insist on seeing the original documents of the witnesses too. Getting the originals of the witnesses becomes cumbersome, as the witnesses may not be too comfortable parting with their essential documents. Sometimes, it may also happen that there are 2 nominees for an account. In such cases both the nominees have to sign on the form and submit their identity and address proof. The final claim will be in the name of both the nominees and will be divided equally between them. In case the nominee is a minor, then the guardian appointed for the nominee has to put up the claim.

These days, because of core banking, post offices around the country are getting connected with each other. There are possibilities that instead of issuing in cash or cheque, the claim amount will get directly credit to your postal savings account, wherever it may be located.

Hope this article is of some usefulness to those seeking claim settlement of deceased accounts in post offices.

Article by Dhruv
Dhruv is an electrical engineer by profession. Apart from liking his job, he has a special love for writing and has often dabbled in writing scripts for skits and short plays. As a Content Developer at ISC, Dhruv is having a whale of a time, showcasing his writing skills.

What is the procedure if the nominees are NRI? We have followed the procedure mentioned above, but the claim is rejected as we have to give Power of attorney. Please guide on what is to be done.

I have some nsc in my father's name who expires after 6 month from the date of opening the nsc .I want to know whether there is any interest applicable if I close them before or after 1yrs along with the initial.nominee is my mother and can I continue those nsc for its maturity period.please help me I am not getting the right answer.

I had posted a comment on 18 Nov but have not yet got any reply. So please reply me about the interest as mentioned in my comment.

My aunt who was in possession of an MIS certificate with effect from June 2015, could draw her monthly interest payment only for three months as she expired on 12/9/2015. Myself was the registered nominee with the PO as she was a spinster. I submitted my claim application only in the first week of this month as per PO rules and regulations and was accepted by the authority. My question is, apart from the principal amount what will be the unclaimed monthly interest of 27 months?

Post office official said that I can apply for my father's FD after 3 months of death only. My father expired on the 8th of June 2018 and they say that I can claim only after 8th September 2018. Is that true?

My mother had KVP but she died and the nominee was my Father but he also died. My Father had a second marriage and I have all the documents regarding the KVP. Will I get the amount?