Today there is a lot of women working to support their families. Days has gone when working of woman was taboo in Indian society. If you are a woman working in some organisation you have to be alert to save yourself from sexual harassment and exploitation. Govt. of India has issued guidelines from time to time and had enacted "The Sexual Harassment of Women at Workplace Act 2013." Now is the duty of every woman to get acquainted with the act and rules. If women know the law and procedure to fix the offender, it will certainly help to protest her from sexual harassment.

Many legal developments lead to enact this law known as "The Sexual Harassment of Women at Workplace Act 2013." Supreme Court issued Vishakha Guidelines in 1997 to protest women from sexual harassment. This act has the all provisions regarding constitution of internal complain committee, local complain committee, complain procedure, conciliation and punishment. All the main features of this act is explained below.

What covers the Sexual harassment 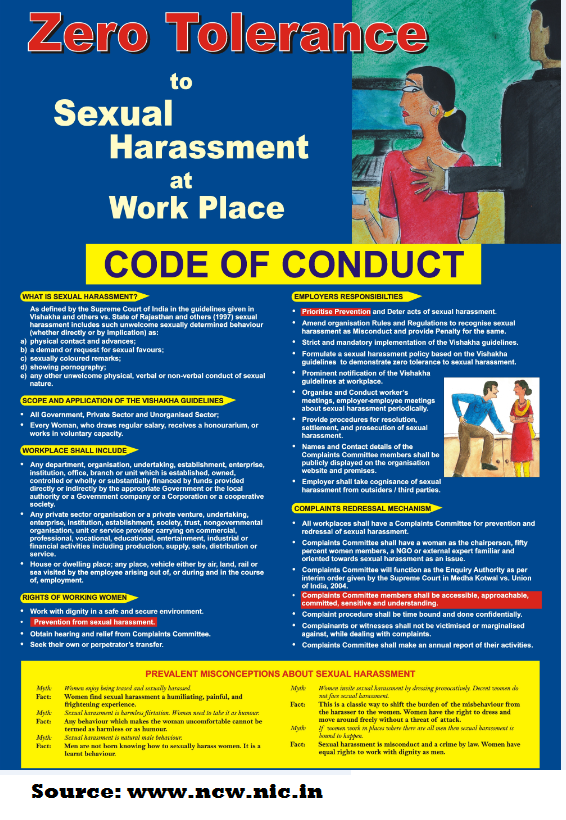 These are the duties of employer to make the work environment safe for working women.

The ICC of any organisation is responsible for implementing the rules and regulation to protect women employees from sexual harassment. ICC is the body to take the written complaint from the aggrieved woman.

Constitution of ICC: The presiding officer must be a woman officer employed at the workplace. Not less than two members from persons with experience in social work/law and committed to women's cause. One member who knows about issues of sexual harassment from NGO'S working on Women's causes. Half of the members of ICC should be women.

Every district officer will constitute a local complaint committee at district level to investigate the matter from the establishment where no ICC has been constituted due to the employee's number less than 10 or the complaint is against the employer itself.

Internal Complain Committee is the appropriate body to take the written complaint from the aggrieved woman. So the aggrieved woman should give written complain to ICC within time frame. ICC will issue a notice to the accused to explain his view. Principle of natural justice is followed during hearing. A complaint of sexual harassment needs to be filed within 3 months. The period may extend to another 3 months, in grave circumstances that prevented her from filing the complaint in time

On receiving the complaint, ICC will issue a notice to the accused to explain his view. Principle of natural justice is followed during hearing. Initially ICC tries to conciliate the issue.

On receiving the complaint, ICC will issue a notice to the accused to explain his view. During the pendency of an enquiry the ICC may recommend to the employer to transfer the woman, grant leave up to 3 months or other relief available under law. On the completion of the enquiry ICC submit the report to the employer/ district collector in case LCC. If no charges proved no action, charges proved leads to misconduct. Appropriate punishment for misconduct will be awarded. ICC also may recommend some amount to be paid by offender to aggrieved woman. The employer or DC will act within 60 days on the recommendation.

The complaint committee can recommend the following punishment. Written apology, a warning, a reprimand or censure, withholding promotion, withholding increments, termination of service,

It is the duty of the employer to assist the women in filing criminal case against the accused if she desires so. The various legal sections as follows:
Section- 354-A -Sexual harassment of the nature of unwelcome physical contact and advances or demand or request for sexual favours, showing pornography.
Section -354-B - Assault or sue of criminal force to women
Section- 354-C -Voyeurism
Section- 354-D - Stalking- Imprisonment up to 3 years with fine for 1st conviction.


Government of India has enacted various laws from time to time to safeguard them from sexual harassment, sexual exploitation and rape menace. Government of India had enacted "The Sexual Harassment of Women at Workplace Act 2013." To protect the women from sexual harassment. Every employer has to ensure that no such incidents should occur in his premises. Women are advised to report such incidents to ICC/ LCC as applicable. If the women are alert and aware, sexual harassment can be avoided. Women should not do false reporting. 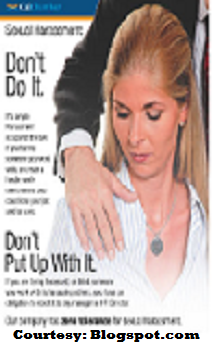 Article by NK SHARMA
I am Mechanical engineer with MBA and M Phil degree. I have a passion for reading and writing. I enjoy in sharing knowledge with people.

What to do before, during and after the cyclone?

Tropical cyclones cause extensive damage in almost every year in the coastal areas of the world. In this article, the author discusses how to remain safe during the cyclone. Read the article to know various 'dos' before, during and after the cyclone.

What to do for the safety of your luggage while traveling

What to do when exams are near?

Are you worried about what to do when your examinations come near? Read this article to know about what all can be done before exams like making notes, Meditating, practicing on question papers, eating healthy food, revising and last month revision of your notes.

What to do when debit card is lost?

What to do if You forgot your gmail password

This article describes the procedures that can be implemented to recover a lost and forgotten gmail password.

More articles: What to do

I am very much impressed by this article. The author has brilliantly presented the legal provisions and procedures relating to sexual harassment cases in workplaces. The article is no doubt very informative. I have been a member of the committee for prevention of sexual harassment in my offices where I have worked at different points of time. From my experience as a member, I make the following observations:-
(a) Most of the times, the suffering lady employees don't complain. As a result, the erring officials get encouraged.
(b) There are various forms of harassment (as the author has mentioned). The lady employees lodge complaint only in extreme cases.
(c) Other lady employees sometime discourage the suffering lady from lodging complaints.
(d) Even if the lady employees lodge complaints, usually there are no supporting evidences or witnesses. As a result, the erring officials manage to save themselves.
(e) In some cases, the complaints are malicious and are lodged when the lady employee fails to get some benefit (like leave, permission for late coming/early going, not performing her duty properly, etc.) from her superior officer.

I reiterate that the article is excellent and provides complete legal perspective and legal redress available for sexual harassment in workplaces. I strongly recommend this article to all.

Thanks Mr. Partha for applauding.

A very good article by the author. He has very precisely given the points included in the act. Now it is mandatory to all companies to form a committee with an outside member in the committee. In case of corporates where there are multiple units in different places, the Corporate office will have the main committee where an outsider from an NGO will be nominated as a member. Each Unit will have its committee and one member of this committee will represent the committee in the corporate office. Individual committees will conduct inquiries on the complaints received in their unit and take a decision and the same will be informed to the corporate committee. Every company in its Annual Report they should mention about the complaints received and actions taken on the complaint.
I appreciate the author for his article which is very educative with full information