Being admirers of the wonders of nature, for our son we planned a birthday with a difference. We wanted it to be quite affair in the midst of nature surrounded by peace, silence and tranquillity. Thanks to the Almighty, our son (9 years) agreed and our dream turned out exactly as we hoped for. Having a chat with a good friend of mine, K Gudi wilderness camp at BR hills,Mysore,Karnataka sounded ideal albeit the rarity of sightings of big cats (tiger and leopard).

It was our first trip during the monsoons, so we ditched our sunglasses, caps and packed our umbrellas, raincoats, jackets and torches. We left from Bangalore on a cloudy Sunday morning via Ramanagara, Chanapatana, Maddur, Mallavalli and Kollegal to BR hills. As we moved on, the chaos of city and urban traffic gradually gave way to the laid back, relatively calm rural landscape with abundant green fields and endless tree lined roads. Apart from a couple of drizzles in between, the rest of the journey was dry and pleasant. In the vicinity of Maddur, we came across a partially filled lake with some bird life. Here our faithful Canon had its chance to capture some images of egrets, cormorants, herons and moorhens. As the lush green fields breezed past us, we came across brahminy kites, mynas, bulbuls, storks, kingfishers and drongos at regular intervals flying across or resting on the wires and overhanging branches.

Once we reached the forest department gates of the SH80at the foothills of BR hills we had to show our booking forms and were quickly cleared ahead to KGudi. The transformation of landscape was just magical; the road was good with lush green trees and foliage on either side with no human 'sightings' for long stretches. The peace and powerful silence was disturbed by an occasional bike zooming past us. It made us realise the wonderful gift of God to mankind "Forests & Jungles" that we have to preserve it for our children and future generation. Although we saw mounds of elephant dung, we did not see much of wildlife except for some birds and deer. After around 20 km we reached some human settlements close to BR temple and took the left fork to K Gudi Wilderness camp. Further on around 14 kms later we finally reached the camp.

Settling down at the Camp

While our rooms were being cleaned, we had a much needed cup of coffee. The location of this wilderness camp had the feel of a jungle camp and at the same time a hill resort. It was almost like Coonor that we visited earlier this year with the major difference being lack of 'people, human activity and commercial establishments (not even one!)'. We immediately loved the locale and allowed some time for the lush green landscape to sink in. Armed with the camera we went for a stroll from the golghar (dining place) to the tents and log huts. The location was amazing with rustic tents, log huts and jungle on one side and a gentle sloping mountainside leading on to a valley and mountains on the other side. Just in front of the reception is the Kyathadevarayana temple and a small water body surrounded by tall euclaptus trees and dense foliage. Here we came across plenty of babblers, green & blue throated bee eaters, orange breasted Malabar thrush, ashy prinya, parakeets, spotted dove, great tits and mynas.

Once we unpacked, we set out for a delicious sumptuous lunch buffet (this has been of a high standard in all the jungle lodges we've visited so far). After a heavy lunch we had a quick siesta on the hammocks outside the tents. It was safari time, checking our camera gears and after a cup of coffee we set out on the jeep safari hoping to see the elusive big cats. K Gudi is one of the unique forests were in the lucky visitors can have a sighting of the three predators a leopard, wild dogs or a tiger!! We came across some huts of tribals who look after the forest and small coffee and pepper plantations. As we drove around the dense jungle covered with wet green foliage we realized the downside – it would be difficult to sight wildlife as the thick foliage offered excellent cover for the animals. We spotted plenty of spotted deer, a changeable hawk eagle, brown fish owl and few pairs of shy and solitary barking deer. At a large pond we saw some turtles and a pair of sambar deer. The endless vast jungle was the saving grace as we did not sight a big cat.

Night in the Jungle

On our return we found hot tasty pokodas and coffee waiting for us. A short documentary followed by a good heavy dinner found us quickly tucked in bed. Around 10pm, the lights were shutoff! Yes we had to be in the dark, in the tents, in the middle of a jungle that's designated as a tiger reserve. Initially it was a mixture of elation and a tinge of fear as we could hear the night time jungle noises, crickets, frogs, the scampering of small animals or pigs in the vicinity of our tent and the steady pitter-patter of rain on the tent roof with odd small twigs fall with a dull thud. Suddenly there was a rather loud flapping noise in the washroom. Many things flashed in our minds, after being brave enough with two bright LED lamps and torch we opened the door to find a small bird flapping about (it had entered through a small hole in the window frame), it had probably found its way in to escape the rain or it had its nest in the tent! Having taken a couple of photos we returned to bed to be soon overcome by exhaustion and we fell asleep.

The wake up call was around 5:30 am with the reliable staff serving us tea and coffee with biscuits at the tent porch. Grateful and thankful to the men, we gulped our coffee and left shortly for our morning safari. The cold breeze whizzed past us as we sped down the slopes towards the base of the hill, a large fallen tree (likely uprooted during the night rains) blocked our way and we had to turn back. We stopped as we spotted a small herd of Indian bison (Gaur), the large male was intimidating but didn't bother about us snapping pictures. Suddenly the naturalist pointed out four horned antelope. We caught sight of a pair of these rare creatures but couldn't get a good snap. As we negotiated the difficult terrain after the overnight rain, the forest was transformed with the 'wet monsoon look' in every direction. Suddenly the jeep stopped and the naturalist pointed out to some fresh tiger tracks along the sides of the forest path. We waited for a while and went to the likely locations but couldn't see the tiger. On our return to the camp we came across a sambar kill that was fully eaten.

Back at the camp we all took our time to participate in the Independence day celebrations, where in the national tricolour was aptly hoisted by a retired army veteran. We admired the national spirit shown by all young and old, driver to manager and everyone who took part. After a full buffet breakfast, we winded up for our departure with mixed emotions, elated that we spent quality time as a family in a serene jungle that we hoped our son would remember, disheartened that we didn't sight a leopard or a tiger that would have made our son's birthday even more memorable. But yeh! You can have the best of everything. Isn't it!

After loading up our luggage, on our journey back we admired the jungles up to the forest gate. En route to Bangalore we slowed down near a lake to take some pictures of painted storks, herons and turtles. We were lucky to spot a water snake gracefully gliding in the water before it entered some reeds. We stopped at Maddur for some Maddur vadas, snacks and coffee and finally reached Bangalore by evening.

Before concluding my article, let me mention the location of K Gudi wilderness camp. I hope it will be helpful for you while planning the trip.

This short break was certainly enlightening for me as I could unload some of the excess baggage that many of us carry around. I could move away from the rat race and the hectic stressful pace of daily metro life to the clam jungle life where in noise is hard to be heard, silence is all powerful and soothing to one's mind. Last but not the least the ticking of clocks and ringing of mobiles were missing from of lives during those two days in the company of nature. 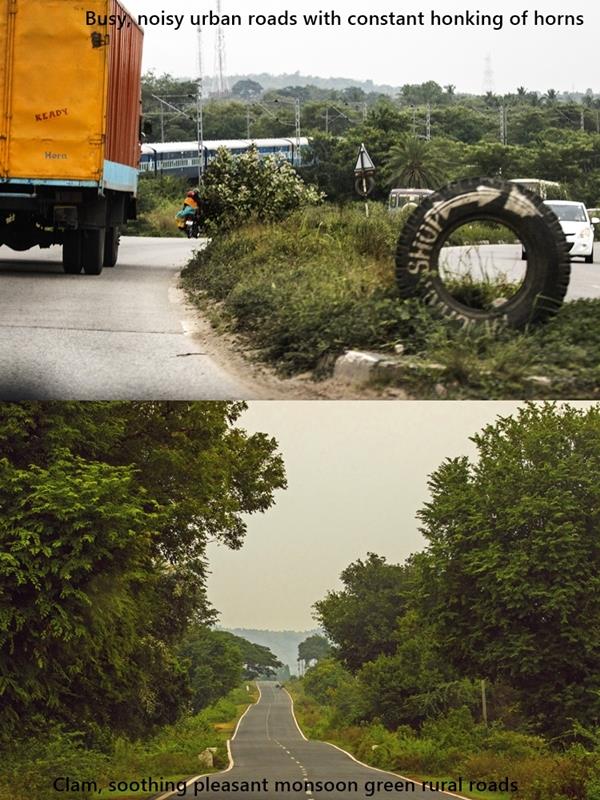 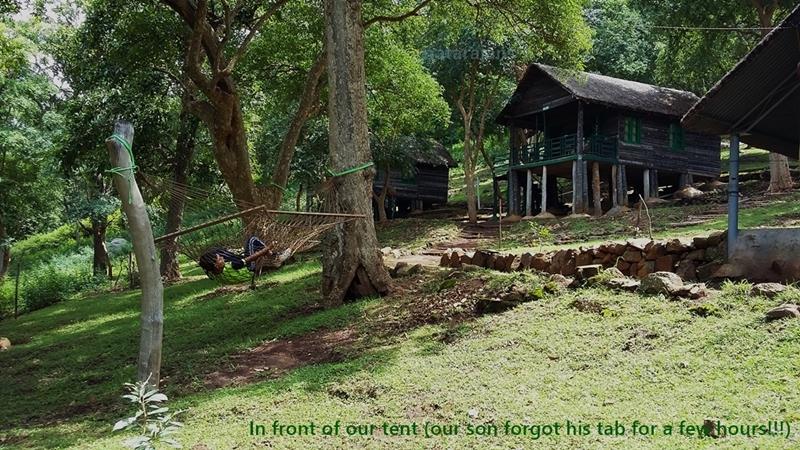 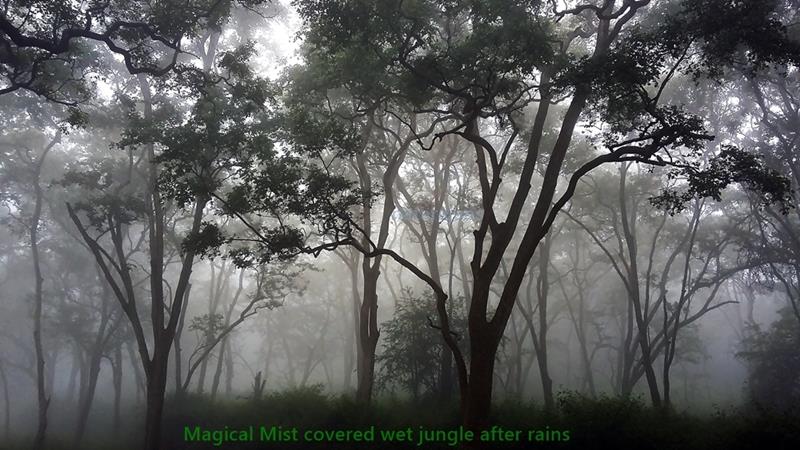 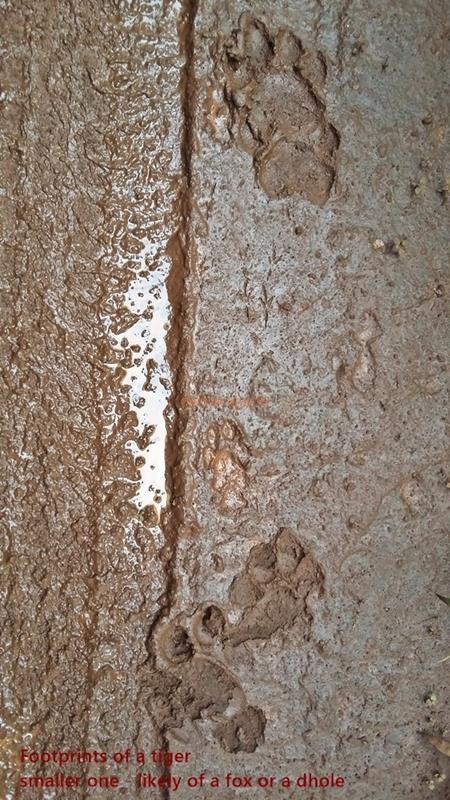 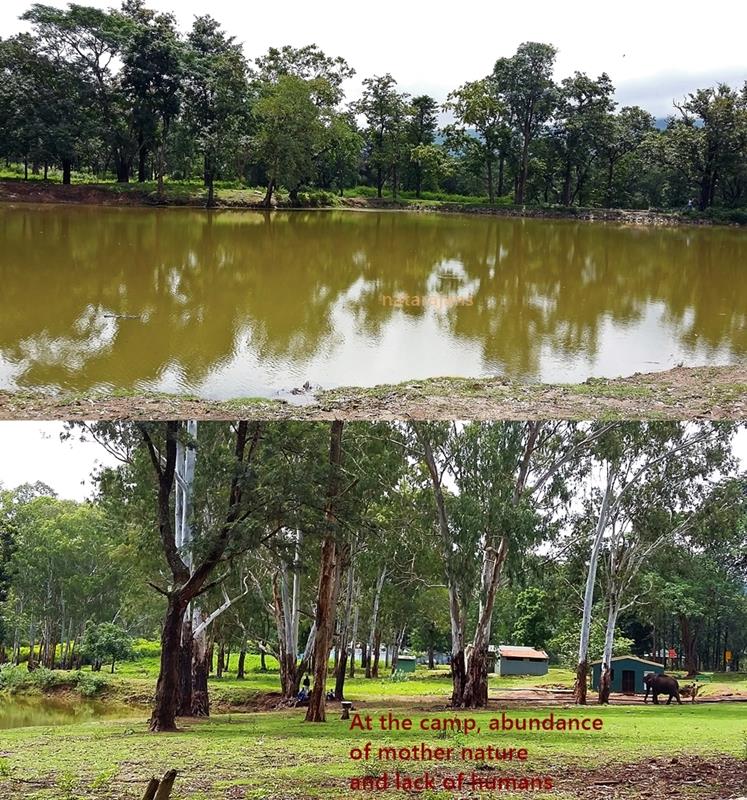 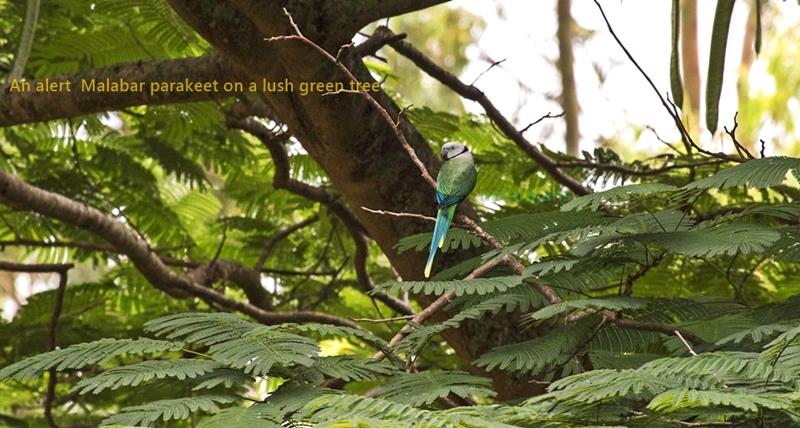 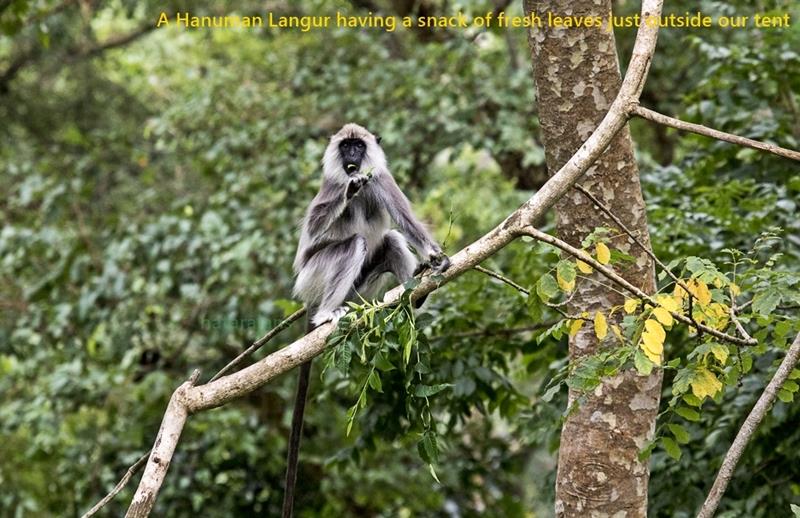 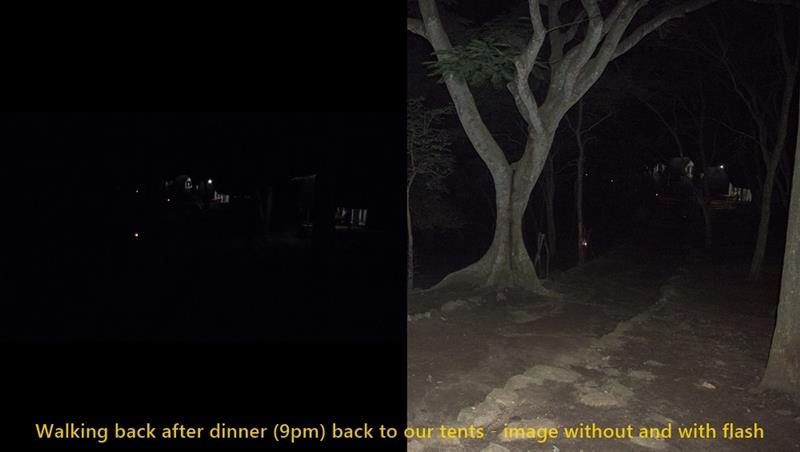 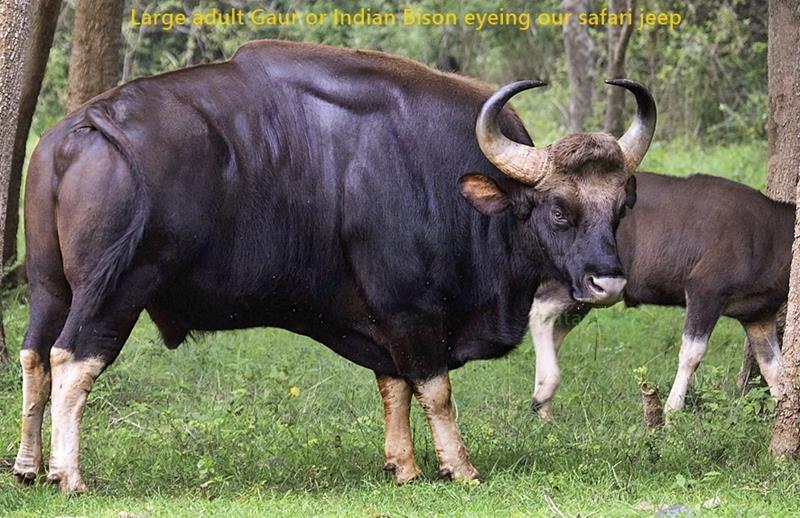 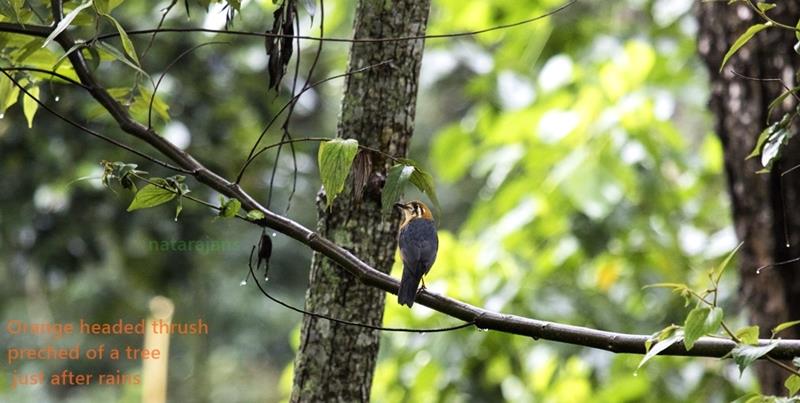 Karnataka is very beautiful according to your sharing tips. I always very excited to visit new places in India. Recently , I planing to visit in Karnataka

Natarajan, Nice article and well described. You make a wise choice of celebrating your son's birthday with a difference. Today's children are lost to the world of gadgets. They have to be exposed to the beautiful world that we stay in. This visit to the MM hill's will be cherished in your son's life. Nature is beautiful unless we elders guide and foster the values of aesthetic beauty, the children will not learn to appreciate the nature. Being away from the hustling and bustling hectic schedule of life, the experiences in the wild and scenic beauty are memorable. MM hills are beautiful and serene, I too had been to MM hills and cherish the memories of being in the forest area, sleeping in the tent and being awake even for slight sounds coming from the surroundings. The early morning birds songs are pleasant to hear, the sunrise in the skies was wonderful. Being away entirely from city life to a life of calmness,natural beautiful surroundings is very nice. Having the dinner, camp fire and the breakfast amidst the greenery is unforgettable. We trekked to a tiny village with few houses on the hill top, the way to the hill top was difficult to climb, with rocky terrain. It was hard to imagine the way people lived there without electricity and water facility. For all the requirements they had to climb down the hill. It had one government school with one room and all the classes were taught there. Children who grow up with all facilities in the city will know the values of life, when they move out and see the real world outside. We also visited the beautiful Hogenakkal falls and went for coracle ride in the waters. The rocks and the waters are worth watching, they are magnificent. The Madeshwara temple in the MM hills is famous and the entire trip was good.