The following is the morphology of the human male reproductive system.

A pair of the testes are lodged in a pair of scrotal sacs or scrotal pouches which hang externally below the abdomen. These testes are ovoid organs which are covered by a white fibrous connective layer called tunica albuginea. Each testis (Singular) measures around 3-5 cm. the length and around 3 cm. in width. Testes are the chief organs of the male reproductive system which are concerned with the production of male gametes-sperms or spermatozoa and thus directly involved in the process of reproduction. Testes not only are chief organs of reproductions but also they act as endocrine glands and thus produce the male hormone testosterone at puberty.

Scrotum is a thin fold of skin which hangs behind the penis below abdomen region. A septum divides the scrotum into two pouch-like structures into which the testes, blood vessels, nerve supply, and spermatic cord enter. The scrotal wall includes muscle tissue and is elastic in nature. Scrotal sacs are part of male genitalia and will correspond to labia majora of female external genitalia.

Two oblique passages which extend from the anterior abdominal wall into the scrotum and through which the testes descend down into scrotal sacs just before the time of birth. Once the testes descend into scrotal pouches, the openings of the inguinal canals get sealed to prevent the retraction of testes into the abdomen. In some cases, after the descent of testes, the inguinal canals are not become closed which allows part of the intestine to get protruded into the inguinal canal which causes severe pain to the individual. In medical terminology, this defect is commonly known as a Simple Hernia. Doctors through surgery remove the intruded intestinal part and also close the partially closed inguinal canal to treat the defect.

A cord-like structure which originates from the abdominal cavity and suspends the testis in the scrotum position is known as the Spermatic cord. The spermatic cord is made up of Vas deferens, blood vessels, muscle layer, and nerves. 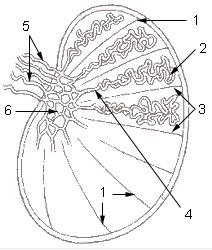 The coils of long seminiferous tubules which are compactly packed in the lobes of the testis are held together by a connective tissue which includes Leydig cells or Interstitial cells which are endocrine in nature. At puberty time of male, these endocrine cells dissolve themselves to secrete a steroid male hormone called Testosterone. Puberty is the attainment of youth at which time the testes or ovaries reach maturity and are ready to form sperms in male or ova or eggs in males. Usually a male or female attains puberty in between 10-13 years. Testosterone hormone secreted by testes in the male will bring about some secondary sexual characters by which we can identify a male. These features include the development of beard and mustache, enlargement of testes, voice becomes deep, the growth of facial hair, hair grows in armpits and pubic region, chest becomes enlarged, and muscles in the shoulder becomes strong.

From each lobe of the testis arise ducts (12-14 ducts) which move upwards of the upper pole of testis together form a fitting cap like structure called epididymis. The ducts which arise from the lobes of the testis are known as vasa efferentia. The sperms which are formed in the seminiferous tubules are immature in nature and are transferred to epididymis through vasa efferentia. The epididymis is the region where the immature sperms stay for sometime till they mature.

From the epididymis, there arise a single distinct tube, which is about 6 meters long moves down along the lateral side of the testis and again rises up in the form of sperm duct or vas deferens. The sperm duct from each testis passes through an inguinal canal into the abdomen. Then these two sperm ducts loop over the ureter from their side and from behind the urinary bladder join the urethra. Sperm ducts carry the sperms from testis to urethra.

There are three accessory glands associated with the male reproductive system and they are as follows:-

A detailed article that explains the male reproductive system. Children often mistake testes for kidneys; you may laugh, but it is a common misconception. We have to educate children in year 4 or year 5 when they learn about organ systems and the function that kidneys are in the abdomen and in the back and not in the scrotum.

Glad that the author has brought out about undescended testis. Here a simple advice is for the mother, father or grandparents to observe the male infant as he grows, the testis should be in the scrotum, sometimes when a child is crying, it can move upwards. It is better to see a qualified pediatric surgeon if the scrotum is very small or the testis is not felt. This is important because it is difficult for many general doctors to differentiate between retractile testis (little higher than normal, does not need surgery) and undescended testis (often needs surgery sooner to preserve testicular function).

Many adults have one testis that is undescended and people ignore it if this is the case then at least see a surgeon because an undescended testis can also develop diseases that are difficult to diagnose as it is hidden from view.

The epidydimis is the place where sperms are stored and they are carried by the vas or the sperm tube. This is important to understand because, after family planning operation in men, the doctors often ask for 3 or more semen analysis before declaring the operation as successful because sperms formed prior to the operation can be stored in the tube and can still be viable and healthy for a few months.

The prostate gland is something that is not felt easily or seen as it is located on a deeper plane. Many men forget about the prostate gland, it get's enlarged as men grow older and can cause an obstruction for the outflow of urine. A decrease in the speed at which the urine comes out, increasing pressure needed to pass urine, increased number of times a male individual needs visit the washroom to empty his bladder are all indications that the prostate has enlarged and should seek medical counsel. At an early stage medicines would help, at a later stage or in very big prostates surgery would be needed.

A lot of people confuse between Impotency and Sterility, especially in Men, it becomes a taboo subject to discuss and hence leads to many misconception and broken marriages. Impotency is a failure to achieve and maintain an erection that is needed for normal intercourse, hence leading on to pregnancy in the normal fashion. A person who is impotent does not mean that he is sterile. A Sterile male with respect to reproduction is one who does not have the minimum number of healthy, moving sperms in his semen, he can still have a normal erection. It is very important to know that both diseases need different types of treatment and can still father a child.

Testes also produce male hormone androgen which is responsible for the secondary sexual characteristics in a male. Leydig cells produce Androgen hormone. Leydig cells are found in between seminiferous tubules of testes.

For an ordinary citizen knowing about the male reproductive system is not at all possible unless and until he or she gets information from a science student. This article is well written and even a common man will understand the male reproductive system in detail. The author can further write articles on the reasons for the couples not bearing the child even after all the parameters of their health were good. Such kind of articles would prove to be more beneficial for the couples who got married long ago and want a child desperately.