I first visited Chennai over 30years ago, when it was still called Madras. The city had left me mesmerised with all that it had to offer. The Marina Beach had taken my breath away – memories of the expanse of the golden sands, the thundering sound as the waves crashed into the shore and the dark clouds looming overhead remain etched in my mind.

V S Ramaswamy Kandaswamy, the driver assigned to my dad chauffeured us around the city, taking us shopping and showing us places of interest. Communication was a big problem because none of us spoke Tamil and he spoke neither Hindi nor English.

However, he was a smart young man, excellent at his job and quick to realise that we were Catholics and he made it his purpose to take us to every Catholic Church in the Madras. And that is how my family and I had arrived at Luz Church, three decades ago. 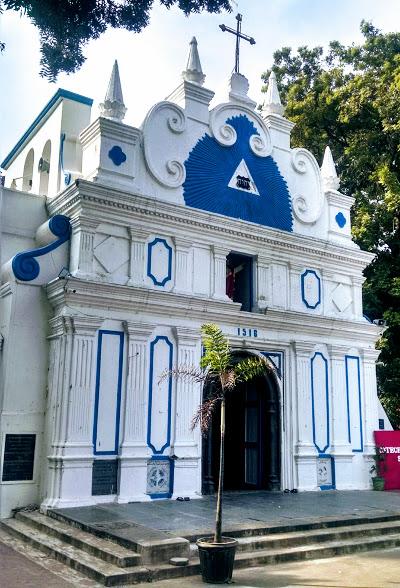 Back then, I had fallen in love with the calm and the solace that the quaint little Church radiated. Destiny brought me back to Chennai, and I now live in the city. I make it a point to visit Luz Church, whenever I am in its vicinity. The other day, I attended a friend's brothers wedding reception at the SIET Sports Pavilion, on Mount Road, and after a scrumptious feast drove down to Luz Church in Mylapore.

The 16th Century Church in Chennai

Luz Church is a Shrine dedicated to Mother Mary, Our Lady of Light. The Portuguese constructed the Church, in 1516, more than 500 years ago. It is one of the oldest Churches in Chennai and interestingly, the oldest building in Chennai, belonging to the colonial era. 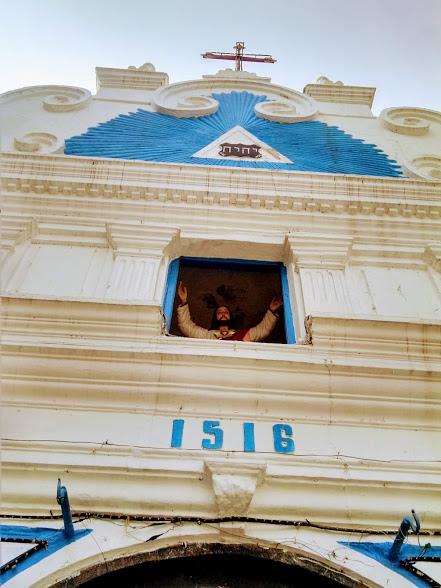 The locals refer to it as 'Kattu Koil' which when translated into English means, 'Church in the forest'. 'Kattu' in Tamil means forest and 'koil' is a place of worship. The irony is that today the Church is surrounded by a forest of another kind – a concrete jungle! However, the remnants of the forest that once existed can still be found, in the tree cover, around the Church and its immediate environs.

The topography of Mylapore has changed over the years, and today the Luz Church stands at the end of a narrow street, concealed from the clatter and the clutter of the city. I still experience a certain peace and calm whenever I am there and become oblivious to the fact that I am in the midst of the city and its chaos.

Some historians believe that a smaller church existed in the place where the present church stands. However, no documented proof is available to validate this claim. 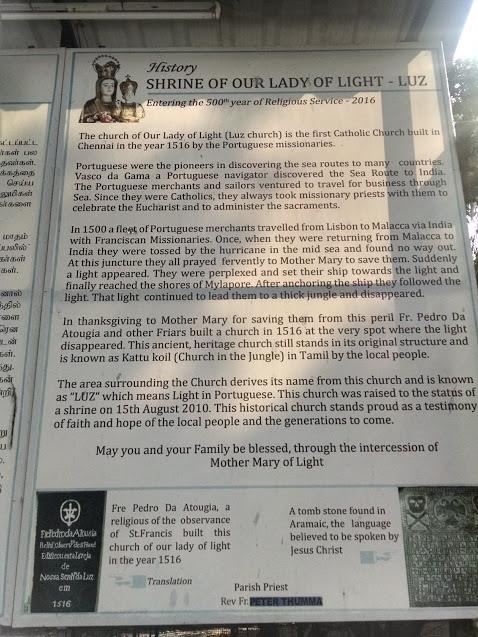 Legend has it that in the early 1500s a fleet of ships with Portuguese merchants onboard sailed from Lisbon to Malacca, via India. The merchants were devout Catholics and were accompanied by Catholic priests so Eucharistic celebrations and sacraments were possible, no matter where they were.

Once when on a voyage from Malacca to India, the merchants got stuck in the middle of a raging storm. Sensing the peril that they were in they prayed fervently, to Our Lady, for succour. They knew their lives were in danger and prayer was their only recourse. As the men huddled in prayer, seeking Mary's intercession, a bright light miraculously appeared in the distance, almost beckoning them. They steered their ships towards the light, which guided them to shores of Mylapore – and then it led them deep into the forest, to the place where the church now stands. Today, it is called Luz Church, and its neighbourhoods are called Luz, Luz Corner and Luz Church Road. 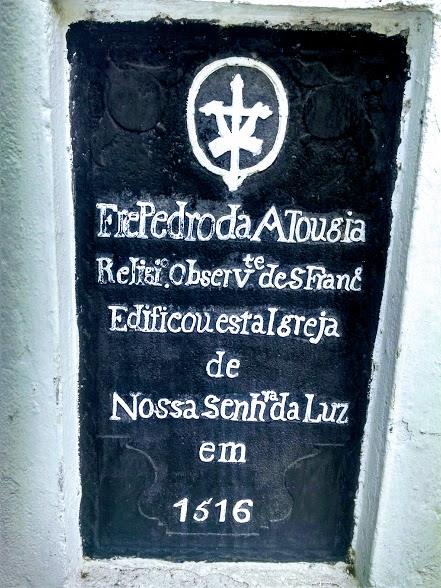 Father Pedro Da Atougia, a Franciscan friar had the church constructed on the very spot where the miraculous light had led the seafarers to safety. He dedicated the church to Mother Mary, as Thanksgiving and called it Nossa Senhora da Luz. 'Nossa Senhora' translates to 'Our Lady' and 'Luz' means 'light'. Hence, it came to be known as the Church of Our Lady of Light.

The Architecture of the Shrine of Our Lady of Light

With its elegant gothic-baroque style architecture, Luz Church exudes an old-world charm. The exterior is plain, with a white façade and fringes of blue. 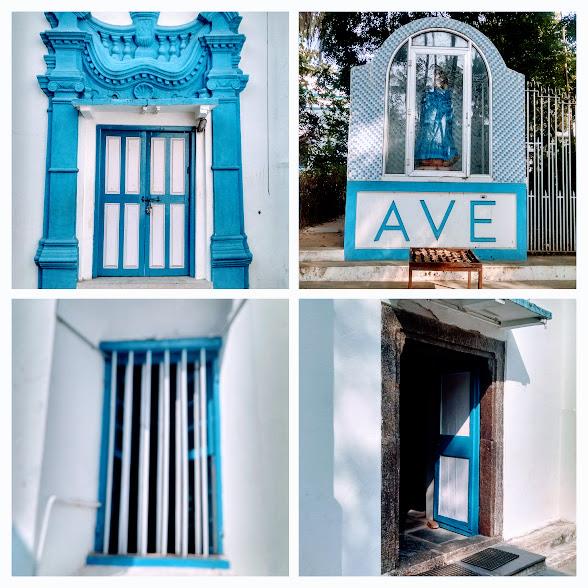 The interior is both plain and elaborate, at the same time. It gets a minimalistic touch from the gothic style arches, while the baroque styled elaborate ornamentation on the frescos that adorn the ceiling of the main altar, make it ornate. 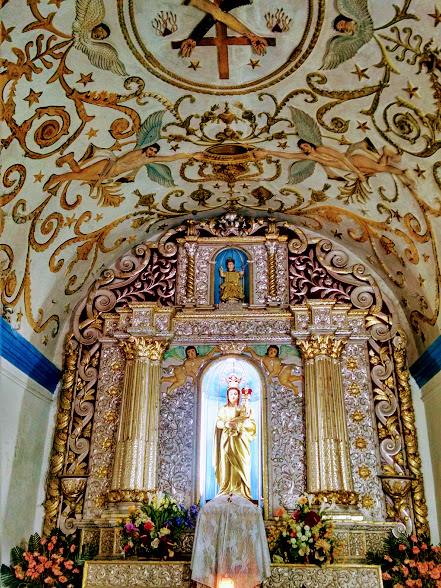 The altar is elaborate, with intricate patterns gilded in gold and silver. The dome-shaped ceiling above the altar is comparatively subtle, yet displays an arresting fresco. 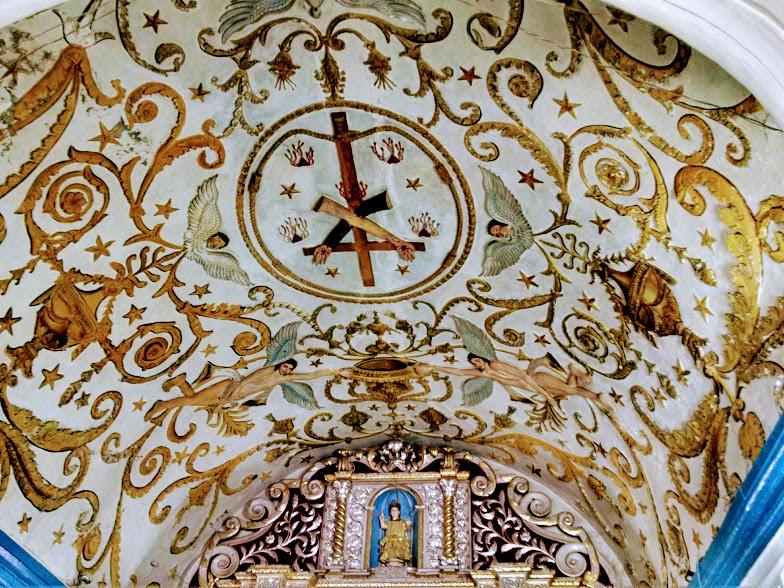 Behind the altar, above the tabernacle is a striking statue of Our Lady of Lights. Statues of Christ and St. Joseph are flanked to the left and the right of the Sanctuary. Right above the Sanctuary is a huge painting of Our Lady, which is probably a few hundred years old. Another image of Mama Mary, with baby Jesus in her arms hangs on the side wall. The Stations of the Cross are also depicted on walls. 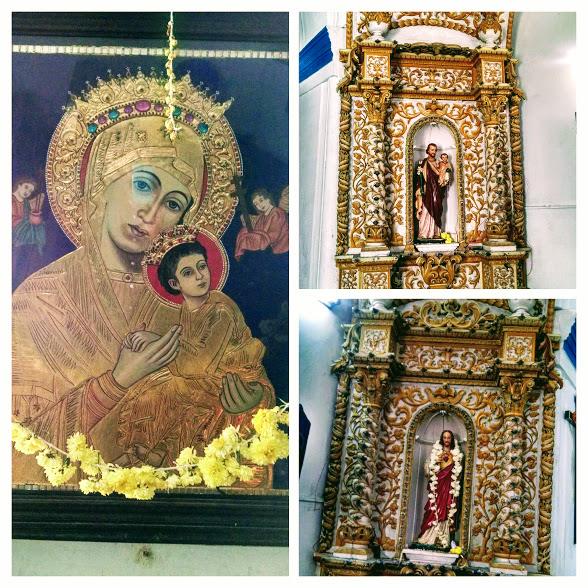 A small side entrance on the left also leads into the Church. Stone tiles in different hues create a uniform geometrical pattern on the aisle. Wooden pews line either side of the aisle. 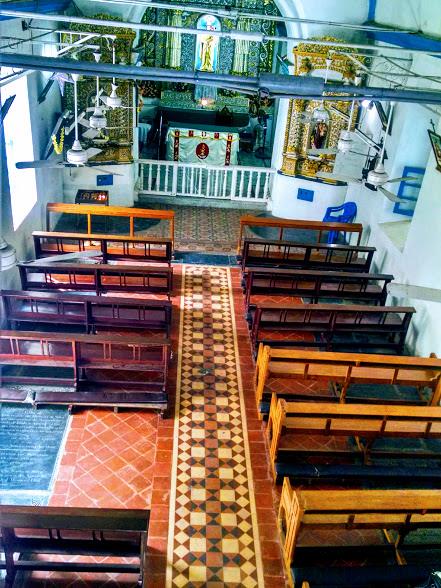 At the back of the church is a spiral stairway leading to the choir gallery. Visible from here is the statute that overlooks the courtyard at the front of the church. A number of memorial panels adorn the walls and the floor of the Church. 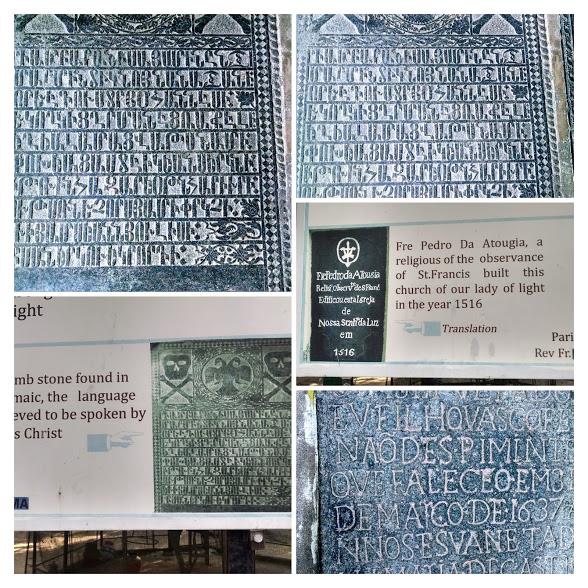 Right outside the church stands a tall statue of St. Jude. He was one of the twelve apostles of Jesus and was also
Christ's cousin. 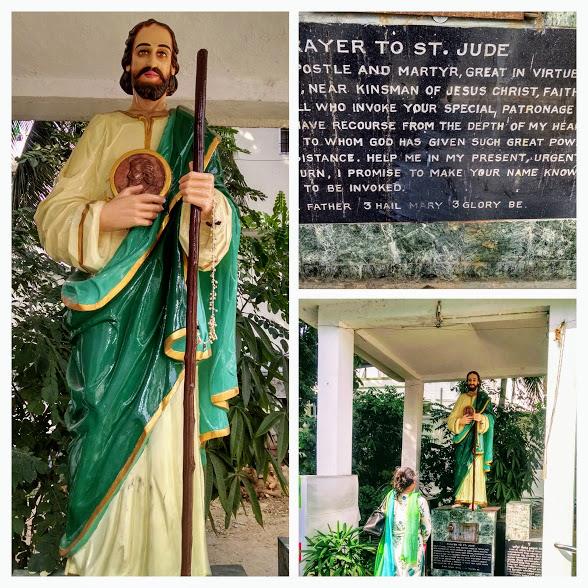 A beautiful grotto stands at one end of the church compound, beside the boundary wall. It is a serene place and made visually beautiful by live plants. 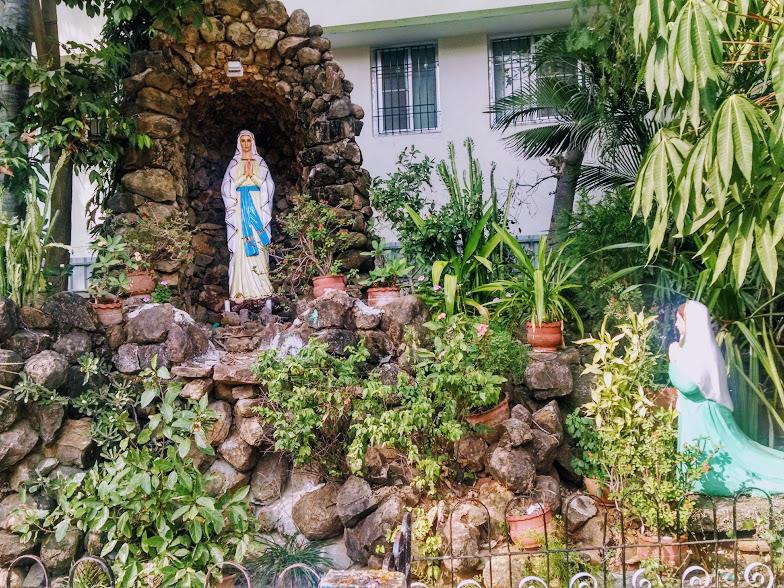 In August 2010, the church was accorded the special status of Shrine and is now called the Shrine of Our Lady of Lights. The Department of Metropolitan Development Authority of Tamil Nadu has declared it as a Heritage Monumental Shrine in Chennai city.

A small gate at the back of the church opens into the side road, of the renowned St. Isabel's Hospital, a multi-speciality hospital with 300 beds and a College of Nursing. The hospital is managed by the church. Stella Maris College is one of the better known women's' college in Chennai, also comes under the church.

The feast of Our Lady of Lights (Prakasha Matha) is celebrated on 15th August, each year. People belonging to different faiths participate in the celebrations, which include a chariot procession.

Luz Church must be on the itinerary of every tourist visiting Chennai. Its historic significance makes Luz Church a tourist attraction. What to see and do in Chennai? Keep Luz Church on your must-see/visit list.

Thirumullaivayil, A Pilgrim Place Near Chennai

Why do we give to the house of God?

In this article we learn why people give their funds to churches. The benefits they derive from the action. The beneficiaries of those funds apart from the church and how those funds help in enlightening people of the goodness of the Kingdom of God.

How churches raise their funds to support their activities.

In this resource article we are going to learn how a church raises its funds. The various modes of fund raising methods including special fund raising events , pledges taken by worshippers, giving at freewill , sale of articles and identifying church sponsors are some of the methods discussed here.