A graphic record of the electrical variations produced by the beating of the heart is called electro-cardiograph. These variations are due to the development of electrical negativity or impulses of excited muscles as compared with unexcited tissues. Impulses in the muscles are caused due to the cardiac cycle or relaxation and contraction in the heart. The contraction is known as systole while relaxation is called diastole. An instrument used to observe the working of the heart is called electrocardiogram. Electrocardiogram was discovered by Einthoven in 1906. Einthoven is known as the father of E.C.G. ECG is used for following two purposes:

Einthoven used string galvanometer for obtaining the cardiograph. In new model E.C.G. instruments also, the galvanometer is the main part. It is connected with electric wires. While taking the ECG, these wires are attached to the wrists, the lower portion of legs and the machine is put on. Through wires, the electrical impulse generated by the cardiac cycle is transmitted to the galvanometer, the needle of which shows deflection accordingly. The galvanometer is attached to a recorder where the deflection caused due to fluctuations in electrical impulses in muscles is recorded. E.C.G. is formed by a series of ridges and furrows. Normal Pattern of ECG for a healthy person is given below: 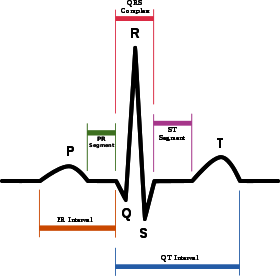 In this, P wave indicates the impulse of contraction generated by S.A. node. QRS wave indicates the spread of impulse of contraction from A.V. node to the wall of ventricles, whereas the T wave represents the relaxation of ventricles. Any abnormality in the working of the heart changes the wave pattern of ECG and can be interpreted by a trained physician to diagnose a particular disorder. The technique to detect the abnormalities of the heart with the help of ECG is called electrocardiography. 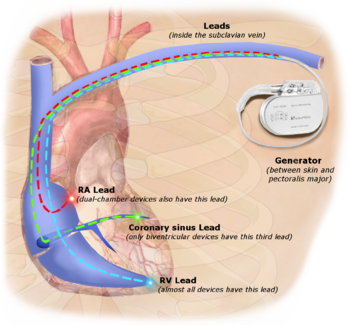 The pacemaker is an instrument that sets the pace at which a phenomenon occurs. Often used along to indicate the natural cardiac pacemaker or an artificial cardiac pacemaker. An artificial pacemaker is used to pace the heart on a long-term basis when normal heart rate 72-80 drops to abnormally low levels like 30-40 due to disease or operation and threatens the life of the patient. A pacemaker consists of two parts viz, a pulse generator and an electrode. A pulse generator is a sealed box. Which contain lithium halide cells to produce power for over 10 years and an electronic circuit to regulate the rate pulse width of the electrical impulse. The pulse generator is placed under the chest below the collarbone. The electrode is a fine metallic spring inserted in a thin layer of biocompatible plastic which is connected on one end to the pulse generator while its special tip remains in contact with the interior of right ventricle whenever the pulse generator is exhausted it is replaced by new one. The necessary precautions for patients having pacemaker are as below: 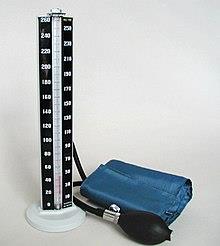 Due to the continuous flow of blood, a pressure is exerted on the wall of blood vessels. This pressure is known as blood pressure (B.P.). The instrument used to measure B.P. is known as the sphygmomanometer. Sphygmomanometer was discovered by Scipione Riva Rocci in 1896. The instrument actually measures the atmospheric pressure which is equal to the pressure of blood in arteries. The instrument has a rubber pocket (cuff) in which air is pumped. It can be rapped over the arm. The pocket is connected with a rubber bulb through a tube. Another tube connects the pocket with a mercury column fixed with a meter scale which is movable. When the B.P. of a person is to be measured, the rubber pocket is rapped over the arm of the person so that it remains over the brachial artery. Air is now pumped into the pocket with the help of bulb. Due to increase in the air pressure the level of mercury in the column rises which can easily be seen on the meter scale. Pumping of air is continued till the pressure of mercury becomes higher than the person's B.P. Now the stethoscope is put over the brachial artery and heartbeat is observed. Due to high pressure in mercury column, the sound of the pulse is not heard. The air pressure in the apparatus is released slowly by opening the knob at the bulb. The pulse sound is regularly heard. With gradual decrease in air pressure, a situation prevails when the blood pressure and air pressure in mercury column become equal. In this situation, the sound of the heartbeat is clearly heard by ears. Ite denotes systolic pressure in arteries. With the further decrease in air pressure, the sound gradually becomes louder. But if the decrease in air pressure is continued, the sound of heartbeat diminishes slowly and ultimately hearing of sound stops. The pressure in mercury column at this point denotes the diastolic pressure of blood in arteries. If the systolic and diastolic pressure of a person is 120 and 80 mm, respectively, his / her blood pressure is represented as 120/80.

You thus now know all about the three medical instruments - ECG, pacemaker and sphygmomanometer - which are related to the heart.

What are the risks of high blood pressure?

How To Control Low Blood Pressure?

Level Of Blood Pressure And Its Care

Blood pressure is one reveals the speed of the pumping/flowing of the blood to our heart. Normally we used to say,"I am having Blood Pressure". In the real sense, everybody has Blood Pressure, only because of the blood pressure we lives. But actually the problem arises when the pressure of blood is vary. Blood pressure should be normal and it should not fast or slow. If it is fast, the High BP and if it is slow, Low BP can be said. We can see about the variation of BP.