Gonads are the organs of the body responsible for the formation of reproductive cells (sperms and ova). Thus, basically, gonads are reproductive organs. During reproduction, few cells of gonads also function as an endocrine gland and secrete some hormones. Both testes and ovary in addition to producing sperms and ova also produce hormones. These are known as sex hormones which are responsible for the appearance of secondary sexual characters. In man, they include the growth of hair on the face, chest, axillae and pubis and the masculine voice. In the woman, they include the development of the breasts, widening of the pelvis and sweet voice, no development of hair on the face. If sex glands are removed or do not function properly secondary sexual characters of either sex are suppressed, generally, females on the removal of ovaries develop male characters. 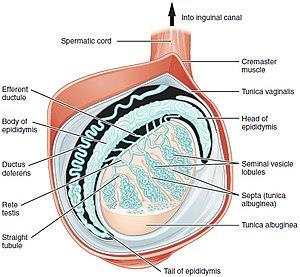 The testes of man are found inside a scrotal sac situated outside the body. It is made up of a large number of seminiferous tubules. The connective tissue of testes contains the special type of cells called as interstitial cells or Leydig's cells. These cells are responsible for the secretion of male sex hormones. These sex hormones induce the development of secondary sexual characters in males. Development and maturity of the penis and seminiferous tubules is directly influenced by the testes.

Testes produce testosterone and the androsterone collectively known as androgens, under the influence of Luteinizing hormone (LH) from the anterior lobe of Pituitary . The hormones of testosterone are as follows:

The functions of androgen (testosterone and androsterone) are as follows:

Hypersecretion of testosterone or androsterone causes sexual prematurity in individuals. Secondary sexual characters also develop before the desired age.
On the other hand, if the hormone is secreted in insufficient quantity, the organs involved in sexual reproduction become less developed. Sexual maturity is also achieved at the late stage. The persons become sexually inert (Eunuchs) in case of acute deficiency of the hormone. If testes of a person are removed such person becomes strong physically because he does not lose energy in reproductive activities. Testes of oxen and male goats are removed to keep them strong and large sized.

In human female, two ovaries are found in the lower portion of the abdomen one in each side of the uterus. The main function of ovaries is the production of the egg. However, corpus luteum of ovaries are also involved in the secretion of certain hormones which are chemically similar to hormones secreted by the adrenal cortex. Following types of hormones are secreted by ovaries in females:

Gonads include both testes and ova which secrete many hormones in male and female. Gonads are reproductive organs as well as endocrine glands. Gonads are regulated by the pituitary gland which is also called the master gland.