There is a large amount of household and other waste generated in cities and towns and due to insufficient work force of garbage cleaners, it is not possible to collect all the garbage produced on the same day and thus the garbage dumped in heaps is a common site in the societies and market areas. Though municipal bodies are trying to lift the garbage but due to various reasons they are not able to dispose it efficiently.

The garbage dumped at places gives foul smell and creates health hazard for the local population. The stray animals also scatter it here and there in search of food. This open garbage is a big nuisance in our life.

Presently in most of the societies the household waste is collected and is kept in big plastic bins outside the societies and on the side of the roads where the municipal garbage trucks come once or twice a week to collect the same for onward sending to big garbage dumps outside the cities and towns. Some of this garbage is picked up by the rag pickers and goes for local recycling by small operators in the cities.

The garbage and waste from houses and markets remain in open for long times and especially in rainy season is a source of big inconvenience. The foul smell from these society level dumps is very repulsive and intolerable. These are a continuous source of bacteria and other health hazards.

In market area, the situation is much pathetic as the amount of garbage generated is much larger and strewn across the streets. Though many shopkeepers are keeping it in the assigned bins and places but this open garbage is a source of great nuisance. 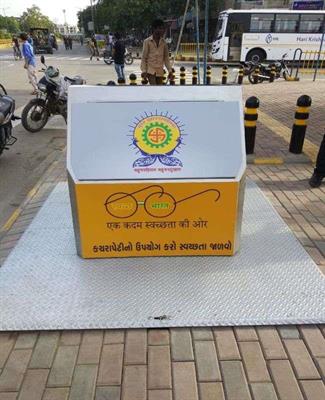 (Source of picture: taken from Google images)
Underground garbage bins is a concept where the big size bins are buried in the Earth and garbage is dumped there from a hinged opening from the top about the road levels. The individuals as well as the municipal workers can dump the waste material in that bin. As the bin is of large size it can store about 1.5 ton of garbage and when it is full it is removed with a lift and emptied into a carrier truck to take the garbage to the main disposal place. The bin is sealed from top and except for the hinged opening for throwing garbage in it, there is no other opening.

These bins are to be provided in road junctions and near the societies where people can throw their waste materials in it. These bins are having an electronic sensor attached which gives an alarm at the controlling point, when it is full, and accordingly the workers can come and empty it and keep back for next cycle of usage.

The Municipal body in Surat city in Gujarat state has recently installed these garbage bins in Surat and there status is monitored from a control room by electronically observing how much a particular bin is filled so that next step for its emptying can be planned beforehand. This information was in the news recently. Some other cities like Chennai and Mumbai are also planning to install such bins. This is one of the advanced steps in the direction of clean garbage collection and if it is successful the model can be copied in other places in our country.

The underground garbage bins have a potential use as there is no foul smell and mess on the outside on the roads and it may be a future solution to collect garbage in the effective and efficient manner.

Appreciation to the author for bringing up this great article which stresses the need to create underground garbage bins for the collection of waste. The way the garbage is left unattended for days together even for small reasons, the whole area starts stinking and one cannot stay even indoors. If the garbage is stored underground and lifted when required, it would be hygienically good and the people will not get any health related issues. Though the garbage is transported and recycled in Hyderabad as of now, I feel this new suggestion must be taken up by GHMC in a big way.

Thanks Mr Mohan, for reviewing my article. Surat has taken lead in this and some other cities are following but progress is slow may be because of a good amount of civil works associated with this. Still I feel that it is one of the best ways to contain the garbage underground and help in avoiding it's littering here and there