The process by which gametes are produced by the gonads is called gametogenesis. The process of sperm formation is known as spermatogenesis and the process of formation of the ovum is called oogenesis . The gametes are the only link between generations and their nuclear DNA is the depository of all those genetic information which are required for the development of the new organism. During the process of gametogenesis, the germ cells undergo meiosis so that in gametes the number of chromosomes is reduced to half and gametes have the haploid number of chromosomes.

Spermatogenesis is the formation of sperms from the germinal epithelium of the seminiferous tubules of testes. The germinal epithelium contains cuboidal primordial germ cells and tall somatic cells called Sertoli cells or nurse cells. The Sertoli cells anchor the differentiating cells and provide nourishment to the developing sperms. Spermatogenesis complete in two phases: 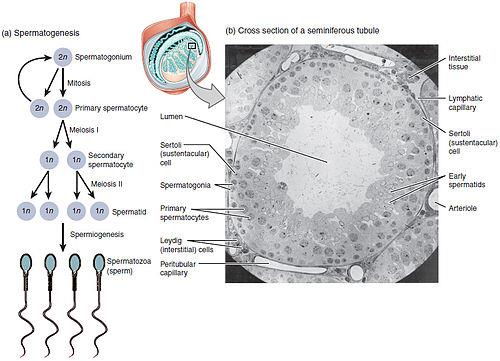 The formation of spermatids completes in the following three phases:

Formation of sperms or metamorphosis of spermatid

The transformation of spermatids into spermatozoa is called spermiogenesis. The spermatozoa are then known as sperms. Spermatids formed as the result of maturation divisions are like typical haploid animal cell and in this form cannot function as the male gamete. During the process of metamorphosis, a non-motile spermatid is converted into motile sperm by following changes:


All these changes together result in a typical sperm containing the head, middle and tail. During the process of differentiation and development, sperms have their head embedded in the Sertoli cells from which they get nourishment.