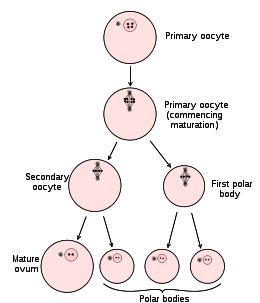 The primordial germ cells divide by mitosis to produce oogonia. These oogonia divided by repeated mitotic divisions forming clusters of oogonia called ovigerous cords. These ovigerous cords lie close to the germinal epithelium. When oogonia stop dividing they are called oocytes. In each cluster of oocytes only one enters the growth phase and is known as the primary oocyte, while the remaining oocytes form follicle cells and provide nourishment to the developing ovum, the primary oocyte.

The growth phase of the primary oocyte is very long. It varies from a few days to many years. Growth phase takes about 6 - 14 days in hen after ovulation, but three years in frog and in women all the oocytes are present at the time of birth but no one grows till the attainment of puberty, i.e. 12 -14 years. However afterwards they grow one by one. During the growth phase, the following changes occur:

In the maturation phase, the nucleus of the oocyte undergoes two maturation divisions. The first division is meiotic; as a result two haploid (n) cells are produced. In this division, cytokinesis is unequal; the large daughter cell with almost entire cytoplasm and yolk forms the secondary oocyte. While the smaller one with the haploid nucleus (n) and almost without cytoplasm forms the first polar body which is given off from the surface of oocyte at the animal pole. The secondary oocyte with the haploid number of chromosomes undergoes second maturation division or second meiotic division. This division is also unequal the large one containing yolk is called ovum and small cell is the second polar body. The first polar may also divide thus, producing the total of three polar bodies which degenerate soon. So, as a result of oogenesis, only one functional ovum is formed from a primary oocyte. In most of the vertebrates, the first meiotic division occurs with the commencement of the growth phase, and second maturation division occurs when the egg is activated by the entry of sperm.

Differences between spermatogenesis and oogenesis

The main differences between spermatogenesis and oogenesis are given below:

So these are the summaries of spermatogenesis and oogenesis. In my next article, I will explain the structure of sperm and ovum.