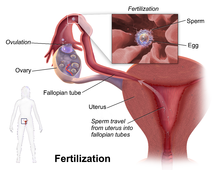 In viviparous mammals including human females, fertilization of ovum takes place in the fallopian tubes. During copulation, the continuous stimulation of the glans penis results in the discharge of semen into the female's vagina this is known as insemination. Sperms are motile structure so they travel up in the genital tract and reach up to the ovum but any of them fuses with the egg. The acrosome of the sperm produces enzyme hyaluronidase which dissolves mucus and egg membranes making a passage for the sperm into the egg. The sperm enters the ovum through the animal pole, the site in ovum from where the polar bodies are extruded out. Thus, the process of fertilization is completed in three main steps:

The process of fertilization involves many physicochemical events. After the sexual intercourse, the semen containing crores of sperms of the male is ejaculated into the vegina from where it reaches to the uterus through the process of syringe absorption. The tail of sperms helps in their movement. Most of the sperms die due to acidic secretion from the uterus wall. Loss of sperms is also caused due to their adherence to the wall of the genital tract. Due to such reasons, only a few hundred or thousands of sperms are able to reach the oviduct or fallopian tube of ovary . These sperms travel with a speed of 1.5 to 3 mm per minute. Once the sperms reach to the oviduct, theses adhere around the ovum. At the place of attachment of one sperm with the ovum, a swollen structure is formed on the outer wall of the ovum. It is called fertilization cone. Such a cone is formed with that very sperm which touches the animal pole of ovum first. The half portion of the ovum with animal pole contain dense cytoplasm, therefore it is more active. Another half of ovum with vegetal pole has less dense cytoplasm and is not much active. Fertilization cone is never formed in this half of the ovum. Moreover, in spite of the presence of many sperms adhering to the surface of the animal pole, only one fertilization tube is formed. 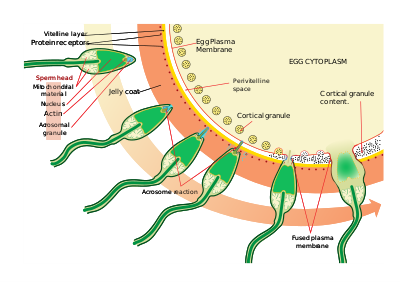 On the surface of egg or ovum, the penetrating sperm releases some enzymes through its acrosome. Such enzymes are collectively called spermlysin. Spermlysin dissolves the egg membrane and makes a passage for the entrance of sperm. The sperm enters inside the egg but its tail degenerate outside. The sperm releases antifertilizin which reacts with the fertilizing of the ovum and dissolves the egg membranes to make a path for the sperm to reach the surface of the ovum. Both antifertilizin and fertilizin are specific species, so, two gametes of two different species cannot fuse. The corona radiata ( a layer of follicle cells) are held together by a mucopolysaccharide called hyaluronic acid. Thus, corona radiata acts as a barrier through which the sperm must first penetrate to reach the egg. The acrosome of sperm secretes an enzyme called hyaluronidase which can dissolve the coverings of ovum and thus help the sperm to penetrate into the ovum. All the changes which take place in the sperm that prepare it to fertilize with the ovum are called capacitation. Union of the two nuclei and two cytoplasm leads to the formation of zygote. After the onset of intercourse between male and female partner, the fertilization of egg may take 2 to 2.5 hours. The fertilized ovum or zygote now moves towards the uterus where it reaches after a period of about seven days. 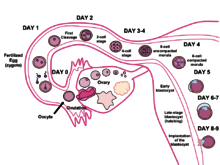 Basically the process of fertilization results in:

So, after fertilization, zygote activated and changes into an embryo.

A well explained and elaborated article on the process of fertilization.

We think that reproduction in the living beings is so simple but after reading this article we find that it is such a complex series of actions and so many biochemicals are required for its smooth passage that even a deficiency somewhere will fail the process completely.

I remember a case where a woman could not conceive as her fallopian tubes (tubes connecting uterus with ovary) were blocked. Now from the detailed information given in this article it is clear as to why she was unable to conceive.

I appreciate the author for contributing such authentic and educative article.

Thanks, Mr Umesh for reading this article. Yes, the fertilization is a complicated process which almost completes in 2.5 hours and there are many physiochemical changes during the process.
If there is no possibility of natural fertilization then artificial means of fertilization is adopted. The test tube baby is one of the artificial methods in which fertilization takes place outside the female body and after fertilization, the ovum is transplanted inside the uterus of the female.
I will be going to submit an article about this topic soon.

A nice detailed article explained by the author regarding the fertilisation. In oviparity the fertilized eggs are laid outside the female’s body and develop there, receiving nourishment from the yolk that is a part of the egg whereas in viviparity the young one develops within the female's body receiving nourishment from the mother’s blood through a placenta.

External fertilization usually occurs in aquatic environments where both eggs and sperm are released into the water.