The male reproductive system consists of two testes contained in the scrotal sac, accessory organs and the penis which is sometimes referred as external genitalia. The scrotum provides the favourable environment of a lower temperature (it is 2 degree Celsius less than the body temperature) for the production of spermatozoa ( sperms ), the other structures assists the spermatozoa to reach their ultimate goal, the ovum of the female. The growth development and function of testes is under the direct control of gonadotropin hormone which is secreted by pituitary gland . The male reproductive system is involved not only in the production of male gametes rather it is responsible for secretion of the number of male hormones. The male reproductive system also helps in bringing the sperms or male gametes to the uterus of the female.

In man, testes are two oval bodies about 4-5 cm in length and 10-15 gm in weight. Testes develop in the pelvic cavity of the foetus but by the time baby is born they descend out and lie in a pouch of skin called scrotum. The scrotum hangs between the thighs. Scrotum helps to maintain the temperature by extension during summer and shrinkage during winter. Adequate temperature (2 to 3 degree Celsius below body temperature) is essential for the spermatogenesis and the testes to remain active functionally. 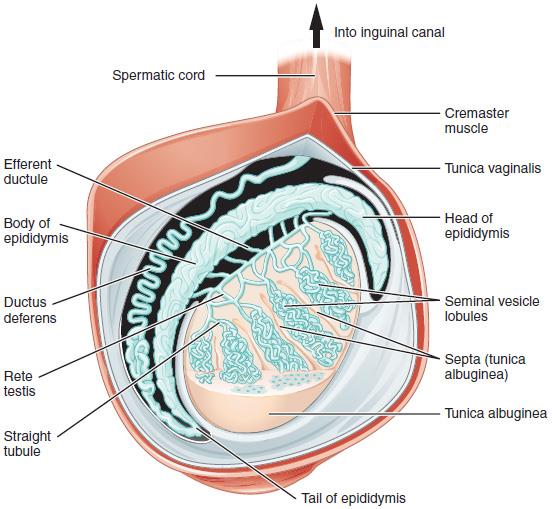 Each testis is covered with a layer of connective tissue known as tunica albuginea. Testes are formed of coiled anastomosing seminiferous tubules and the interstitial cells or Leydig's cells lying between them. Seminiferous tubules are long coiled tubules lined with a single layer of germinal epithelium. Its cells give rise to spermatogonia from which sperms are produced. The long Sertoli cells are present amongst the cells of germinal epithelium in seminiferous tubules. These cells provide nourishment to the developing sperms. Interstitial cells secrete male sex hormone, testosterone which promotes the development of the accessory glands and controls male secondary sexual characters. The cells of germinal epithelium produce sperms after meiosis division. Different stages of development of sperm can be seen in the section of seminiferous tubules. Towards the periphery of such tubules, there are spermatogonia which lie adjacent to each other. Below spermatogonia, several spermatocytes and spermatids are found. Likewise, spermatozoa or groups of sperms are present in the centre of seminiferous tubules. Head of sperms remains inside the cells of Sertoli. Due to the presence of Sertoli cells, spermatocytes, spermatids and spermatozoa are placed apart from each other inside the tubules. In mammals, the scrotum is placed outside the body but remain attached with the body by means of the inguinal canal. Sometimes the testes move upward and do not come down to the inguinal canal. This problem is overcome by the minor surgery in human beings. The posterior portion of each of the two testes is joined with scrotum with groups of elastic fibres which are called gubernaculum. It is associated with spermatid arteries, veins and nerve fibres. These are collectively known as spermatid cord. Due to invagination of tunica albuginia, the testes cavity is divided into 15-20 smaller tubules.

The epididymis is also known as the main storehouse of sperms. Each testis is attached to an epididymis which is long, single, tightly coiled narrow tube of about 20 ft in length enclosed in a fibrous covering. Epididymis lies along the top and side of the testis and is divided into following three parts:

The cauda epididymis is attached to the scrotal sac by a connective tissue called gubernaculum. Epididymis serves as a duct for the passage of sperms from testis to vas deferens, stores sperms prior to ejaculation and contributes to seminal fluid.

Seminal vesicles are a pair of muscular convoluted tubular glands located behind the neck of the bladder. The epithelium of the seminal vesicle secreted an alkaline yellow viscid fluid which forms much of the volume of the ejaculated semen. This secretion contains glucose and fructose which are required for the development of sperms and it also contains prostaglandins.

The prostate gland is found around the urethra at a point where the ejaculatory ducts enter. Prostate gland consists of many follicles like spaces leading into ducts. The epithelium of these follicles secretes the prostatic fluid which is thin and opalescent and gives the semen a characteristic odor. Prostate gland discharges its secretion directly into the urethra. It increases the motility of the sperm and neutralizes the acid condition of the urethra and the female reproductive tract. The prostatic fluid of man is milky, rich in Calcium, fibrinolysin and acid phosphatase and contributes about 20-30% of the total volume of the semen. Enlargement of the prostate gland in older persons squeezes the urethra and obstructs the flow of urine. Surgical removal of the gland is often used as the remedy for it.

The male copulatory organ, penis that deposits sperms into the vagina of the female may be divided into three general areas. The glans is the enlarged tip of the penis which is normally covered by a fold of skin called prepuce, the main body and the two roots which attach the ischial arch of the penis. Histologically penis sows the erectile tissue of corpora cavernosa consisting of blood sinusoid separated by sheets of connective tissue called septae. During sexual excitement, the blood is filled inside the arteries of the penis. It leads to its erection and tight position. In this position, it is capable of invading the vagina. After ejaculation of semen, the blood flows back from arteries and the penis comes to its original position.

The urethra is a common pathway for the flow of urine and secretion of the male sex organs called semen. It communicates with the exterior of the body through a muscular structure the penis. In males, the urethra is 7 to 9 inches in length. It leaves the urinary bladder and passes through the prostate gland and leads to the penis. The urethra is surrounded by a prostate gland at a point where the ejaculatory ducts enter.

The sperms, seminal fluid and the secretion from Cowper's glands collectively form semen. It also contains secretion from the wall of urethral glands. At the last moment of male orgasm, it comes out from the penis as white and thick fluid. In one ejaculation the volume of semen is 2-5 ml -3.5 ml. It contains 20 to 40 crores of sperms. The semen also contains the high concentration of protein, calcium citrate and carbohydrates.

The development of the male reproductive organ is completed at the age of 12 – 16 years. This age is known as Puberty. Testes start the secretion of testosterone hormone at this age. The hormone leads to the development of secondary sexual characteristics which are supposed to be the signal of sexual maturity in males.