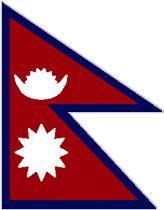 (Image credits: www.brittanica.com)
Flags don't come in different shapes and sizes. Almost all flags in the world are either squares or rectangles. But Nepal's flag is different. It is made up of two triangles. The flag looks just as beautiful as the country. Why is it so that Nepal has a triangular flag? Flags represent a country's heritage. So to learn about Nepal's flag, we need to peek into Nepal's history.

A brief history of Nepal

Nepal is a beautiful country, secluded from the world, sitting on the laps of Himalayas. Nepal has always shared its culture and regions with Indians. The name of the country could have come from its residents called Newar or because it is believed to have formed by a sage called Nemi. The land was ruled by Kiraat dynasty in the 7th century B.C. Lichavi dynasty, who followed the Kiraats ruled from 2nd- 9th century AD over the land of Nepal. The Kiraats are mentioned in Vedas and Mahabharata. Kiraata refers to as mountain-dwelling tribesmen in Sanskrit. Not much is known about Kiratas. Lichavi clan originated in modern Bihar, during the Gupta period in India. They conquered Kathmandu and other regions of Bihar and emerged as a powerful kingdom and stayed such for centuries. Nepal was ruled by Thakuris and Mallas two centuries after Lichavis. The Malla period is often recognized as the Golden Age of Nepal, which lasted for over 600 years. In 1768, Prithvi Narayan Shah of Gorkha dynasty succeeded in unifying regions of Nepal and gave it its present face. The country became a parliamentary republic under the monarchy in 1990, but it only was able to become a democratic republic nation in 2008.

Was Nepal ever colonized?

Nepal was never really colonized by European forces because of its geographical security. As Gorkhas started expanding their rule, they came across British East India company in outskirts of Oudh province. At that time Nepal's border stretched from Dehradun to Sikkim. The Anglo-Gorkha war that took place in 1814-16 was a devastating blow to the country. Thousands lost their lives on both sides and Nepal lost a third of its territory to British East India company.

The war ended with the Treaty of Sugauli signing in 1816. Nepal lost many of its territories to the British. Following this treaty Gurkha military force was recruited into British Indian army. Then peace ensued between two forces. Later Rana dynasty ruled over Nepal. During Sepoy Mutiny in 1857, in India, Nepal also lend a hand to East India company to suppress the rebellion. Nepal also helped the British in the First world war. In 1923 as a result, Nepal and Britain signed a treaty which declared Nepal a sovereign independent state. Ranas of Nepal always had a good relationship with Britain since then. Though Parliamentary democracy was proposed in Nepal in 1990, it only was able to dissolve monarchy and become a federal democratic republic in 2008.

Description and the story of Nepal's flag

Nepal's flag consists of two triangles, colored crimson red with blue borders. The upper triangle has a moon and a rising Sun. The lower triangle has a sun with twelve rays. The flag that currently Nepal boasts was adopted in 1962. Looks like the current flag's design is quite old and is engraved into Nepal's culture. The only noticeable change made to the flag was the removal of facial features of the sun and moon present in the flag. The triangular design of Nepal's flag is more than 2000 years old. It is believed that the crimson red in Nepal's flag denotes the valor of Nepalis. It also denotes Nepal's national flower, Rhododendron. The blue borders denote peace and harmony. The triangles/pennons are often associated with the Himalayas. The sun and moon denote the two dynasties that ruled unified Nepal, the Shahs and the Ranas. In modern times the symbols denote Hinduism and Buddhism, Nepal's main religions. The flag indicates that Nepal remains as significant as the sun and the moon forever.

Regions of Nepal belonged to the Indian subcontinent for many centuries. Back then many provinces sported a flag that was not rectangular. These flags were hoisted during war or royal ceremonies, so they were rich in symbols and symbolism. Nepal's flag too was such flag. Since Nepal was never really colonized, Nepalis kept their flag the same way. They didn't convert it into a rectangular/quadrilateral one like the other newly independent countries. To this day Nepal cherishes its unconventional flag as an indication of Nepali/Gorkha valor and prosperity of Himalayas.