We know that all the biochemical processes are completed by the mediation of enzymes. These enzymes are made up of proteins. Each protein is composed of at least 20 amino acids, whereas DNA is composed of only four nucleotides. The four nitrogenous bases of DNA will determine the sequence of 20 amino acids. All the genetic information of the protein synthesis are coded in nucleotides of DNA. This genetic information is called codon. The sequence of nucleotides or nitrogenous bases in mRNA molecules which enclose the information for protein synthesis is called the genetic code. Several theories have been given to explain the mechanism by which a particular sequence of nitrogenous bases in DNA by transcribing complementary bases in mRNA determines the position of specific amino acid in the protein molecule. The theory which is widely accepted was proposed by F.H.C. Crick. This theory holds the existence of genetic code and its smallest unit which codes for the amino acid is called codon. On the basis of the above explanation Nirenberg, Khorana and Holley have discovered genetic codes.

A codon can be defined as "The nucleotide sequence in mRNA which codes for a particular amino acid, whereas the genetic code is the sequence of nucleotides or nitrogenous bases in mRNA molecules which enclose the information for protein synthesis."

Properties or Characteristics of codons

The main properties or characteristics of genetic codes are given below: 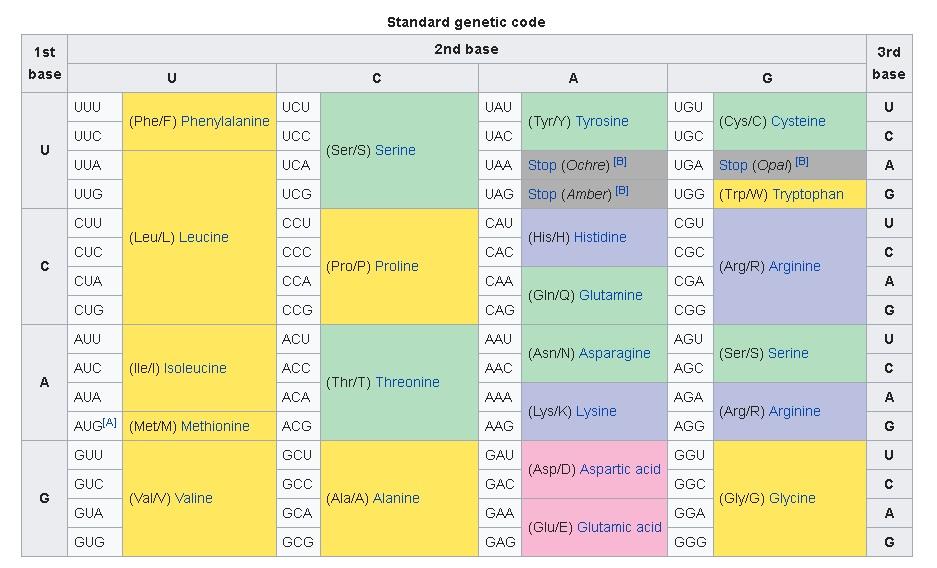 After the discovery of genetic code, the problem of breaking of the genetic code ( i.e., to find out which triplet code stands for which amino acid) arise. The first major breakthrough in the study of the triplet dictionary came in 1961 when at the fifth International Congress of Biochemistry in Moscow; a young biochemist Marshall W. Nirenberg reported his experiments on protein synthesis in vitro. Results of Nirenberg amazed the scientific world. Nirenberg had made the breakthrough which led directly to the deciphering of the code. M. W. Nirenberg and his coworker J. Heinrich Matthaei took an artificial RNA in their experiments with only one type of base Uracil (U). The RNA was thus all poly-U. These scientists got success in synthesizing a protein containing only one type of amino acid phenylalanine. According to Nirenberg and Matthaei, "addition of poly-U resulted in the incorporation of phenylalanine. Poly-U appears to function as a synthetic template or messenger RNA in this system. One or more uridylic acid residues appear to be the code for phenylalanine." UUU thus became the first word (codon) to be discovered in the genetic dictionary. Since then a large number of artificial RNA polymers have been synthesized containing every possible combination for the four bases. They have been tested in vitro for their ability to synthesize protein. The work of H. G. Khorana and his coworker at the University of Wisconsin has been very useful in this direction. By the end of 1968, the total assignment of the 64 triplet codons was completed.

The codon present at the beginning of the cistron is called initiation codon. Initial codon marks the beginning of the message for a polypeptide chain. The initiation codon is AUG in the majority of cases and AUG codes for amino acid methionine. In the same way, the last Condon of a cistron helps in reading the termination of the polypeptide chain. The last codon is called termination codon. There are three termination codons UAA, UGA and UAG. Earlier when the function of these codons was unknown, these were called nonsense codons. The initiator and terminator codons are known as signals and this phenomenon is called punctuation. These particular triplets are recognized by two special tRNA that carries no amino acid and prevents further growth of the protein chain.

An excellent article elaborating the basics of genetic code in living beings.

Genetic engineering is now evolving as a major research area in the scientific world and there are enormous opportunities and scopes of new findings through these research in the world of Biology.

It is the genetic code which controls the appearance and growing up of a particular species and it's a resemblance to its forefathers. A small perturbation or error in the code can give rise to a big deformity in the shape, size, and functioning of the offsprings. Many things in our lives are determined by our heredity. As billions and billions of permissible combinations of these basic codes of life are possible, there are subtle variations from one individual to other. Today we are utilizing that variation in biometric identification which is unique for an individual.

Understanding genetic code and deciphering it minutely is the challenge in these areas which one day will help in unraveling the mystery of life.