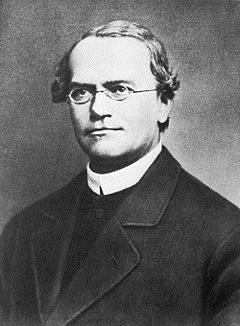 Gregor John Mendel was born on 22nd July 1822 in Austria. His father was a Gardner. At the age of 20, Mendel graduated in philosophy and was appointed as a priest of Augustinian monastery at Brunn in Austria (now, Brno, in Czechoslovakia) in 1843. In 1851, he was sent to study natural science at the University of Vienna. Unfortunately, he could not complete his studies at the University and was returned to Brunn as a substitute teacher of science in 1854. It was during this tenure that Mendel conducted these researches over a period of eight years on the common garden pa plant, Pisum sativum in the monastery garden. Mendel's findings and conclusion of these experiments were published in the local but relatively unfamiliar journal "The Annual Proceedings of the Natural history Society" of Brunn (1865). Mendel was elected as the head monastery and died in 1884. Mendel's work in Pisum sativum which formed the basis of laws of heredity remained obscured and overlooked for about 34 years and he died without knowing the tremendous scope of laws of heredity he had discovered.

Though Mendel completed his work in 1865, his work remained unnoticed till 1900 when three botanists Hugo de Vries (Holland), Carl Correns (Germany) and Erich von Tschermak (Austria) arrived independently at the same conclusion while studying inheritance in plant hybrids to which Mendel had arrived some 35 years ago. While going through scientific journals before publishing their own findings each of them came across Mendel's paper. Since the work done by them had been already done by Mendel, these three biologists collectively agreed for naming the law of heredity after Mendel and also brought their laws to the notice of the scientific world. Subsequently, Mendel's original work was republished in Flora in the year 1901, and after a few years, W. Bateson and his associates confirmed the laws of heredity put forth by Mendel in relation to animals. So, we can say that Gregor John Mendel was the first scientist who explained the mechanism of inheritance from parents to the offsprings. Gregor John Mendel is, therefore, regarded as the founder of modern genetics and is known as the father of genetics.

Why did Mendel work remain unnoticed for 35 years?

The main points to explain the above question are given below:

A lot of work on pea plant was done before Mendel, but all the predecessors of Mendel had failed, whereas Mendel succeeded because of the following reasons:


Why did Mendel select pea plant for his experiments?

Mendel has selected garden pea (Pisum sativum) as the plant material for his experiment because of the following reasons:

Mendel selected seven pairs of contrasting characters for his experiments and after monohybrid cross and dihybrid cross, he introduced the law of inheritance. The three laws of inheritance are known as Mendelism .

Today, we find two contradictory trends at work. One is the erasing of national boundaries and greater trans-national cooperation. The other trend is the chest-thumping that happens in the name of the 'nation'. Anyone who does not participate in actively showering praises on the nation is labeled as an anti-nationalist. This article tries to discuss the views of Tagore on this contentious issue. No doubt, it may sound controversial, but please do read on.

The fall of Titans - Taking lessons from history

This article describes about the real facts of disastrous collapse of merger between AOL and Time Warner.

Natural History and Control of Tuberculosis

This article describes about the history of Tuberculosis, its signs and symptoms and how Tuberculosis can be treated and also prevented.

This article is a compendium of the developments of the human civilization before 11000 B.C. till 1500 A.D. in the Middle East. Read to know the complete history during the times of 11,000 B.C. in the middle east and how the era moved on towards modern days.

This article describes about the life history of ants.