"A flag is a necessity for all nations. Millions have died for it. It is no doubt a kind of idolatry which would be a sin to destroy. For, a flag represents an Ideal."- Mahatma Gandhi

Pingali Venkayya, popularly known as the Flagman of India and learnt to be the designer of the flag based on which the Indian national flag came into existence. Our National Flag reflects the symbol of our Unity, Peace and Humanity and the hard work done by this great man in designing our flag needs a big applause.

He was born on 2nd August 1878 in Peddakallepalli village of Krishna district in Andhra Pradesh. His parents were Hanumantha Rayudu and Venkatarathnamma but brought up by his maternal grandfather Chalapati Rao, a Tahasildar those times. He completed his schooling at famous Hindu High School, which became Hindu College in later years, near Bandar (port town Machalipatnam).

Machilipatnam is famous for fishing and textiles and Venkayya's early life here helped him in mastering the art of cultivating good cotton and learning the techniques of agriculture. He picked up the elements of agri-economics and this helped him to get his livelihood in the later part of his life. A very big fan of Subhash Chandra Bose who fired his imagination to serve the Indian Army. At the age of nineteen he left his studies and joined the military services at Bombay.

Thus he happened to meet Bapuji in South Africa while serving the Indian Army (and participated in the Boer War (1899 -1902)). Unknowingly, he was influenced by him to fight for the mother land and concentrating on his ideology. He couldn't survive much in the Army and returned to his native place in Andhra and worked on agri-products. His hard work resulted in production of an indigenous hybrid variety of cotton seeds by importing the Cambodian variety from America and mixing them with Indian seeds. The plantation of these seeds in his acquired land near Eluru and the growth of Cotton made him more popular as 'Cotton Venkayya'. This got the attention of the local British officers and permitted him to exhibit his produce in the Agricultural Exhibition in 1909. An honorary membership of The Royal Agricultural Society of London was conferred on him. He went to Lahore to study Sanskrit, Urdu and Japanese in the Anglo Vedic School. His interest in learning Geology helped him as an authority on diamond mining and got another nickname of "Diamond Venkayya".

He also served as a Railway guard for a short period in Bangalore and Bellary, later quit his job to work as an inspector of the Plague Disease Eradication Organization at Madras where the Plague epidemic has broke out. During his service under the British India, he was reluctant to accept the British flag and left the job to join the freedom struggle actively.

His involvement in freedom movement

It was the time when the intensity to fight for freedom was gaining momentum. The 22nd session of the Indian National Congress was held at Calcutta with Dadabhai Naroji as the President. Venkayya was also made an executive Committee member to ensure the implementation of their resolution on Swadeshi, Boycott, National Education and Swaraj which were passed in this session.

Not happy with the Union Jack being hoisted elsewhere in the protests too, he decided to work on designing a flag for India. His speech in Japanese in Bapatla in 1913 made him more popular and added one more name - 'Japan Venkayya'. Besides working as a lecturer in the Andhra National College in Machilipatnam in those years, he joined the main stream of national struggle for freedom. A book authored by him - 'A National Flag for India' suggested thirty designs of the flag. He was a regular attendant to the congress sessions and strongly advocated of having an own flag. 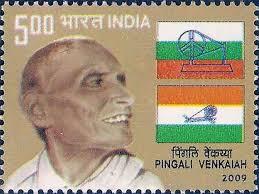 Venkayya and the National Flag

Congress Committee meeting held in Vijayawada on March 31st and April 1st 1921 attended by Mahatma Gandhi has approved the the design of the National Flag suggested by Venkayya. The saffron, white and green stripes with the spinning wheel placed in the white section were the finished product and the flag was hoisted for the first time on April 13, 1923 in Nagpur in commemoration of the Jallianwallah Bagh massacre. Since then it stood as the symbol of India's demand for Self-rule by the Indian National Congress. The Constituent Assembly has approved this as our National Flag after Independence on 22nd July 1946.

In a country where erection of statues in every 'gully' and idol worship is more, the man didn't get due recognition for his services. A statue of Venkayya was one among those erected at Tankbund of the Hussainsagar Lake in Hyderabad and a postal stamp was released in commemoration of his birth anniversary in 2009. unfortunately the designer of the national flag never saw the Indian tricolor flag fluttering from the ramparts of Red fort live in his lifetime till his death in 1963 - neither he was invited nor he could afford to reach Delhi!