A little about the cricket legend

He was not a master blaster but a classic batsman of all times in the world of cricket. Internationally he got reputation for his cricketing skills, particularly his renowned performance as an opener. All the countries playing Test cricket against India during 70s and 80s used to have the strategy how to send our this Little Master from the crease so that they have half won the match. His dedication to the game made him one of the most successful accumulator of runs in Test cricket and thus he became the first International batsman to score 10000 runs in Test cricket. He is none other than Sunil Manohar Gavaskar. Born on 10th July 1949 at Bombay, Suni Gavaskar, popularly known as Little Master or Sunny, played for India in 125 cricket test matches, 107 One day Internationals and 87 first class cricket matches. he never wore a helmet while playing against fast bowlers as well during his career as a cricketer.

The Little Master at strike in Test cricket

He made his test debut on 6th March 1971 against West Indies as test batsman and scored 774 runs in the 4 test series where India registered its historic win with 1-0 by clinching the series. He started creating the records in the game of cricket on his debut itself. Thus he played 125 test matches and scored 10122 runs, 34 centuries which include 4 double hundreds and 45 half-centuries. He was the Skipper of the Indian team for 47 Test matches and dominated the game during a career that spanned 16 years.

His highest individual score of 236 not out was also against West Indies in 1983 at Chennai. His technical excellence with bat to face the world class mighty fast bowlers like Ande Roberts, Michel Holdings, Malcom Marhal, Bob Willies, Richard Hadlee and Imran Khan made him one of the finest opening batsman in the world. He scored 13 hundreds against West Indies which proves his calibre. He played his last test match against Pakistan on 13th March 1987 where he missed his 35th hundred just 4 runs short of 100. He made his announcement of retirement from first class cricket at Lord's play ground while playing the first class test match under rest of the world vs England and he scored his maiden 100 at Lord's in the first innings. Incidentally, he played cricket all the popular cricket grounds in the world but never scored a century at Lord's.

As a fielder he very perfect with 108 catches during his career; he was the first Indian apart from wicket keepers to reach the landmark of 100 catches. His hunt for runs was far excellent while playing against West Indies as he scored four centuries twice in a series against them. His record for the most runs made in a debut Test series and the most Test centuries against the West Indies and the only player to have scored a century and a double century in the same Test Match twice still to be broken though another Little Master Sachin Tendulkar snatched away all other records including highest number of centuries in test cricket.

Gavaskar and One day Cricket

Two innings in One day international cricket made him to receive adverse and positive criticisms. Interestingly, his 36 not out facing 178 deliveries against England in the First World cup in 1974 is considered as the slowest ever innings by a batsman in One Day International match. While his appearance in his last world cup presence i.e., 1987 Reliance World Cup cricket tournament, in which he hit his maiden century 107 in 88 balls against New Zealand, one of the fastest centuries scored by a batsman in the history of World Cups till then.

His exemplary performance as a fielder at slips fielding by the side of the wicket-keeper, brought India the Sharjah cup at Dubai where he caught the balls four times with his brilliant fielding sending the Pakistani batsmen to the pavilion in the Final match. India with its poor batting performance were all out for 125 in 40 overs while Pakistan were dismissed for 85 because of the brilliant fielding effort by this man and ultimately he won the Man of the match and man of the series as well.

Thus Sunny played 108 One day International matches against all the cricket playing countries except South Africa and represented India in the First four World Cup tournaments. He was one among the victorious team members of 1983 Prudential World Cup under the captaincy of Kapil Dev. This winning performance might have influenced his batting style to score quick runs in test cricket and one day matches as well. Two years later he also led India to win in the Benson & Hedges World Championship of Cricket in Australia. 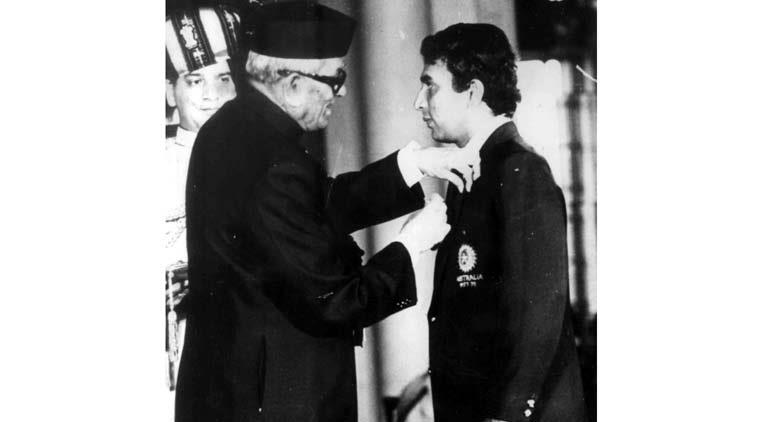 (Gvaskar recieving the Padmabhushan award from the then President of India Dr.Sanjeeva Reddy in 1980)
[ Image courtesy: https://indianexpress.com/article/sports/cricket/happy-birthday-sunny-ten-facts-you-might-now-know-about-sunil-gavaskar-2904612/]

The two books penned by him were 'Sunny days' and 'the one day wonders' reflect his writing skills as an author and he shared his experiences as a cricketer and sportsman. In his book 'one day wonders', he mentioned a request of his son to him one the birth day –' You needn't hit a century but don't get back to the pavilion with a duck'. His honest and subtle way of puitting things about his out of form and people's reactions and how he regained his performance back in action make the reader very interesting about the book to go further. His other writing works include 'Straight Drive', 'Gavaskar Omnibus', 'Runs n ruins' and 'The Idols' explore his thoughts and skills. His comments in between mean the underlying theme about the game and how the cricketer/ sports persons are worshiped at the time of their performance.

As commentator and Columnist

After calling it a day from playing cricket in 1987, he transformed himself into a very good commentator and columnist. His experience and knowledge in the game makes him to the man whom we sought for his comments and opinion about the game and technique that should have been adopted by the playing teams.

He also served as the Chief of BCCI as per the directives of the Supreme Court of India during the IPL crisis that rocked the country. He was awarded with the highest civilian honours of the country 'Padmasri' and 'Padmabhushan'.

While Gavaskar could not be described as an attacking batsman, his ability to keep the scoreboard moving with his unique late cuts and flicks and his defensive game against all odds made him the most successful opening batsman of his times. Even today, the dream team of World XI would give him a berth as an opening batsman. He is a man of par excellence and brought pride to the game and his country as well.

Cricket tips for the budding cricketer

Today cricket has become the most famous sport in the world. Every child these days aspires to become a cricketer, especially in our country. And as with any sport, there are certain things to be kept in mind in order to achieve success. In this article, I will discuss a few useful tips about cricket for budding cricketers.

The strong Indian team crossed the 400 mark for the second time, and this time they did it against the very good Sri Lankan team.