It was the finest moment in the annals of Indian history. At the stroke 12.00 Hrs in the mid-night of 14th Aug'1947 i.e., the change of calendar 15th Aug., 1947, India got liberated from British and Pt.Jawaharlal Nehru sworn in as the Prime Minister of India. The sacrifices of all the freedom fighters proved to be not a waste and those people who lost their kith and kin in the service of their mother land got justice on this day of India's freedom.

Have you ever thought of the size and dimension of the first ever Indian union cabinet of free India? The role of Pt. Nehru in selecting his team members and any suggestion given by Mahatma Gandhi would always figure when we give a serious thought of it. The great freedom fighters of India – Had they sought any positions for their contribution in achieving Swaraj? Had there been any dissent while formulating a new team of ministers for independent India? Some people today have a serious doubt.

It was a nice representation of various leaders irrespective o their party affiliations and it was Gandhiji who suggested to Nehru to induct leaders who contributed for liberation of the country from British and those who were outstanding and most qualified persons. The put aside the differences among them and worked together to work for the nation. Representatives of parties apart from the Congress such as B R Ambedkar who established the Republican Party, Shyama Prasad Mukherjee who founded Jan Sangh, Shanmukham Chetty of the Justice Party, C Rajagopalachari of the Swatantra Party, and Rafi A Kidwai from the Kisan Mazdoor Praja Party were included in Nehru's cabinet. 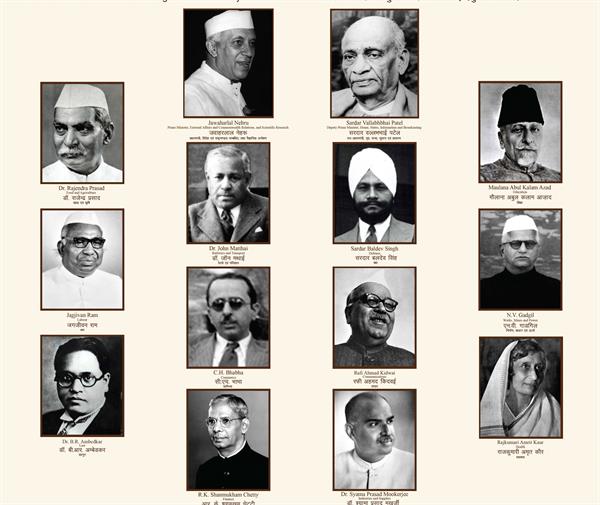 Face is the index of the mind. The team which took oath along with Pt.Nehru on 15 th Aug.,1947 was really had a tough task and were path finders for the development and growth of new India. "We must make our political democracy a social democracy as well. Political democracy cannot last unless there lies in the base of its social democracy" a quote by B R Ambedkar, the then minister for Law and Justice gives a different meaning to the importance of the first cabinet and speaks for itself.