Popular Director S. Sankar just eight years back created a sensational movie 'Robo' which became a blockbuster at that time. In that movie, Sankar created comedy, romance, fights, and feet like Spiderman and Superman with Robo. These creative and innovative thoughts mesmerized the audience which makes the movie super sensational hit of all times. Now Sankar upgraded Robo movie as present version 2.O as a new movie. Visual movie exponent S. Sankar brought out a 2.O movie with the super combination of Super Star Rajinikanth, Bollywood Star Akshaykumar with a huge budget of 500 crores. For visual effects itself, it cost 350 crores for the producers. It took almost four years of hard work to bring out this movie to the audience. The picture was released in Tamil, Telugu and Hindi versions throughout the World. 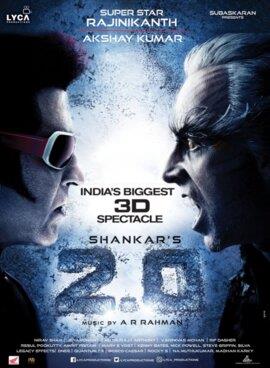 Pakshi Raja (Akshay Kumar) is an ardent lover of birds. He believes that without birds existence, the existence of man on earth is a myth. He used to procure a variety of birds from all over the World and used to protect them in his home. On the other side, Pakshiraja also carries out Social activist work by bringing awareness regarding various problems faced by human society. He started a campaign against radiations released from Cellphone Towers which is causing an increased number of deaths of birds population. He started a battle with government and Telephone companies to reduce the radiations from Cell Towers which became a menace for a large number of deaths of birds. But Pakshiraja didn't get any answer to his problem but faced many insults from society. A Cellphone Tower constructed beside his house killed all his birds at once which made him anger some. Finally, Pakshiraja hangs himself to Cellphone Tower and transform himself into a mysterious force. This mysterious force started snatching away Mobile phones from everyone in Chennai and also committing murders. Then government appoints Vaseekaran (Rajinikanth) to investigate the mysterious force which is disrupting the social order of Chennai. On investigation, Vasikaran came to know a negative force is disrupting the civil society of Chennai. Then Vasikaran brought back Chitti, a Humanoid Robot to end the mysterious force. Whether Chitti brought a solution to this mysterious force or not and how this problem got solved to know one has to go to the theater to watch this movie.

S.Sankar through this movie wants to provide a good social message along with some good entertainment to the audience and in this aspect, he succeeded completely. At present Cellphone becames a human need other than water or something else. In this movie, the Cellphone became the central point of the movie. Director Sankar is able to succeed in bringing out the reality that how people are becoming slaves to Cellphones and how the Cellphone menace polluting social life in a heart touching way. Superstar Rajinikanth, as usual, gave full justice to his role and became the highlight of the movie. Bollywood Star Akshaykumar acted to the best of his abilities such that audience may think that no one can replace his role in that movie. Actually, his role dominated over the humanoid Robot Chitti. Amy Jackson and the other actors added value to the movie by their inclusion. Amy Jackson as Robo created interest in the movie. Director Sankar excelled in maintaining both emotional and visual treat in throughout the movie in a balanced way. Narration related to Cellphone and its introduction to the story brought great appreciations to Director Sankar. Oscar Awardee Musician A.R. Rahaman and Sound Engineer Resool brought some specialty to the movie through their phenomenal work. The wonderful graphics showed by Neerav in this movie cannot be seen by anybody previously in Indian movies. The hard work of the graphics team in this movie can be felt by the audience in every frame of the movie. Editor Anthony through his neat hand work gave super clarity to the story baseline of the movie. The audience can get the fullest satisfaction with regard to this movie when they watch this movie in 3D theaters only.

The 2.O is a truly visual wonder, a full entertainer, an action-packed movie, provide a thrilling experience to viewers, gives a good message to the audience may not disappoint any section of the audience. So my rating for this movie is 4 out 5 marks.

22 female Kottayam is a much awaited movie in the Malayalam film industry. The film has reached in to cinemas from April 13th onwards. The unique marketing tips adopted by the makers received much recognition even before its release. The theme and narrative pattern of the movie is absolutely innovative. This article will give you a sincere and honest review of that particular movie.

In this article I have shared the review of Yash Chopra & Shahrukh Khan's combination Jab Tak Hain Jaan movie. Main lead cast of the movie Katrina Kaif and Anushka were excellent in the movie. Here comes the complete story, performances and presentation of the movie.

Deivathirugal-Tamil movie released on 15th July 2011 .Directed by Vijay and vikram played a lead role in this movie with baby Sarah.It is running successfully in all over world .It is believed that Vikram will get national award for his acting in this movie.Music by G V Prakash is also excellent.It will be the best movie for this year.

The success of a science fiction generally depends on two factors. One is the story line and other is the visuals and photography. Audience may remember that the English movie 'Avatar' had both of these elements and that was a reason for its blockbuster success around the world.

As per the above review the movie 2.0 also appear to be a successful science fiction movie in our country. It is good to note that our producers and directors are also capable of producing movies of world repute.