The young Indian prolific writer Madhuri Kamat made her debut with her book 'Whose Father, What Goes', a retelling of Hamlet. This is the second one from her pen published by Duckbill Books and is now available on Amazon. She has work experience of documentation and editing of NGO work for two decades. As a poet, she has penned a poem on women who live on the pavement and as a playwright, she has portrayed child sexual abuse. She also worked as a scriptwriter for UNICEF and has translated poems by street children. Presently she is working on television soaps and scripts for forthcoming films.

A brief sketch of the book

The story revolves around the main characters of a family of four – a little child, his Mother, his father and grandpa. It reflects human values, the affection between the grandparents and their grandchildren and how the mother tries to "save" her child from the un-detachable love and friendship of his grandfather. It happens everywhere. Every mother wants her child to work hard and become a great personality. In this story the mother wants her son to be like JRD Tata. The author chose to indicate that it is a Parsi family by simply mentioning the Navjote ceremony of the little boy. On different occasions, the mother warns the child, "You are no longer a kid and your Navjote is just over". Thus she generated interest in the story as the reader intends to learn about the Navjote ceremony. 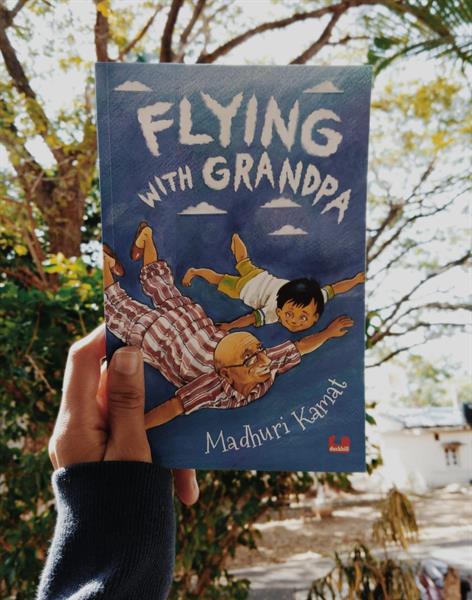 Navjote is just like thread ceremony for boys in the Hindu Brahmin custom. In Zoroastrian faith, the child should be 7 years old as the child is responsible for the duty of offering prayers to God after the Navjote. All the children between 7- 15 years are entitled to this ceremony and they won't perform this for those beyond 15 years of age. A Navjote should follow the specific customs. The Navjote ceremony is a public declaration of faith and is performed in the presence of relatives and friends. The word Navjote is a combination of the two words 'Nao' and 'Zot' which mean 'new' and 'worshiper' respectively. The sacred thread is a symbol of the service of the Yazatas and an indicator that the boy follows the commandments of the religion. Thus a Parsi child is inducted into the fold of the Zoroastrian religion by wearing a sacred shirt called 'Sudre' and the sacred thread called 'Kusti'.

Relationship between grandchildren and grandparents

The element of innocence makes this relationship between the grandpa and Xerxes in this book by the author so beautiful. It's always true that such a relationship between grandparents and grandchildren always lasts for long, is not vulnerable to change and is not inversely affected by any wear and tear. Also, the converse is true. Grandparents always find comfort with their grandchildren as both of them are at a stage of their life which requires a helping hand - of course, the reasons may vary.

Grandparents with their unconditional affection for the grandchildren make the grandchildren trust them only and not their parents and spend their most relaxing time with grandparents. This generates a feeling for the grandparents that they are not alone and insecure. This bond of emotions and mutual trust has very nicely been reflected in this book by the author Madhuri and through the Illustrations by Niloufer Wadia, Both should be applauded for their very good effort.

Some expressions are food for thought

These stand out in the text -
"Everyone is angry with me but why can't I be angry?" he muttered to himself between sniffles.
"We need to take him out of here. he will never grow up with him around."
"In old age, we too, shall behave like kids, why see it as an illness?"
"I don't want to study anymore.These are my days of childhood- no studying!"

You too have the same feelings of the child one day

The actions and reactions were well presented in a dramatic way. On the eve of his Navjote ceremony, the boy receives very big and small gifts where he got convinced with the absence of his schoolmates for the function. To divert his attention, his father asks him to check what type of gifts he could receive and he chooses to unfold the gift packing of the large gifts. He was expecting it to contain big toys but to his surprise, all the big gift packets contained books of larger size. Then he was hopeful of the small gifts and they too were of books of small size with different nomenclature. A disappointed Xerexes throws away all of them and gets punishment from his mother. She claimed that it was her suggestion to present books instead of other gifts so that he can read all the subjects and acquire knowledge.

In another different scenario, all the family members participate in a sports event where all of them compete in different events and the family wins a prize of a family gift hamper. A very eager Sonji opens the gift hamper with a hope that they could win a kitchen kit and is disappointed to see the gift hamper contains books from a bookstall. She then realizes the feelings of Xerexes on the day of his Navjote ceremony.

Let children have their own role model

In the story, the mother insists that her son to become a personality like JRD Tata, who got the first pilot licence issued in India and a businessman who was the patriarch of the Tata business empire. But the boy was confused as to what he should become - a pilot or a businessman? He asks his Grandpa to become a Pilot and he replies that he never told him that he wanted to become a pilot. Then the boy retorts that he too never wanted to become JRD but his Mom was insisting. What is being conveyed here is that it is not necessary to have role models spelt out. As the author stated in an interview, "Children will find their own way but role models come into play because our society treats parents, especially mothers, very harshly when children fall into bad habits or what is deemed as bad company. So holding up a role model is a kind of bulwark and hidden prayer of parents that children will follow the straight and narrow and not fall off the rails."

Madhuri Kamat has been successful in presenting this Parsi story in a simple and understandable voice with excitement for children and also for the elders too. The view presented here is completely personal and based on my level of understanding after going through the book. It may vary from one adult reader to another and from child to child. But it is sure that the grown-ups will receive the message conveyed in simple terms, about projecting of role models and insisting that children focus on studies alone, keeping aside their glorious childhood. Definitely, a book worth reading and allocating space on our book-shelf.

I just now completed the book written by Madhuri Kamat. Thereafter, I have read this review. From the book, we come to know about the Parsi people and their customs. Those who are acquainted with the Parsi customs and Zoroastrian religion know very well that Navjote (not to be confused with Navroz, the first day of Parsi New Year) is a very important festival of Parsi people. The story revolves around the small kid before and after the Navjote, his parents and his maternal grandfather. The grandfather is child-like and the best friend of the little child. On the other hand, the boy's mother wants him to be successful like JRD Tata. The character of the father of the boy is not fully developed. The author of the book has beautifully drawn a pen-picture of the life of an upper-middle-class Parsi family, the mental struggle of the little boy, of his mother who wants him to be very successful, the boy's father and the old grandfather suffering from boredom. The author of this review, Mr. Jagdish Patro has beautifully written the summary of the story and mentioned the key-points. I am not repeating these. But I must state that occasionally I got a glimpse of Swami created by RK Narayan in the little boy, Xerxes.

However, I would like to mention that the author of the book, Madhuri Kamat, has aptly mentioned the motto of the life of the Parsis: "humate, hukhate, huravaste" meaning "good words, good thoughts, good deeds". These should be the motto of everyone's life.

I would like to specifically mention that the font used in this book is well-chosen and will definitely attract the children. The illustrations are of excellent quality. The brief introductions of the author and of the illustrator are good.

[P.S.: In the International Book Fair, I have noted that some children are interested and some of them were trying to read a few pages of the book hurriedly. I remembered my own childhood. The children haven't changed much over the years.]