Rafale Deal between India and France

India has been trying to grow it's defence power to establish the dream of becoming a powerful nation. It has bought several advance armaments and equipment from different nations to fulfill this dream. This includes various small arms, fighter aircraft, missiles, warships, etc. One such deal was proposed in 2007 for the procurement of Medium Multi-Role Combat Aircraft for Indian Air Force. Several aircraft were short-listed. Finally, the Indian government had come to the conclusion of buying Rafale aircraft from France. 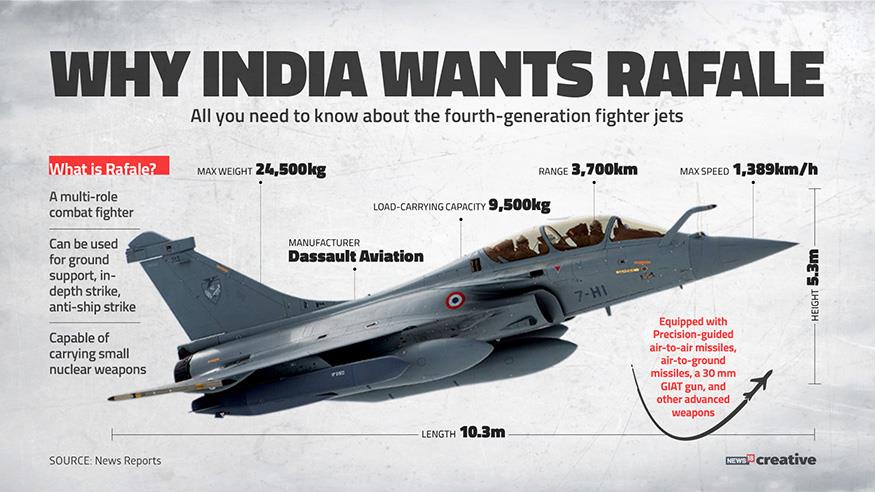 The Rafale deal was signed by UPA government and France government. This deal enclosed the role of HAL(Hindustan Aeronautics Limited) and Dassault for manufacturing of Rafale in India. There were some issues between the two companies. Thus, it took a lot of time for the companies to commence manufacturing of Rafale. Just before the commencement, a new deal was signed by the current government(NDA) and France. Below are some of the important timelines given about this deal.

Timeline of the Rafale Deal

28 August 2007 - Our Defence Ministry has accepted the proposal of getting Medium Multi-Role Combat Aircraft (MMRCA). It was decided that 126 aircraft of this kind would be bought. Thus, various aircraft of different companies were analyzed. It is important to note that UPA government was in power during that time.

May 2011 - Two aircraft were shortlisted: Eurofighter and Rafale

January 2012 - Negotiation with Dassault Rafale was started as they have provided the lowest bid for the deal. This deal includes the provision of 18 Rafale aircraft Off the shelf to India. The remaining 108 would be made in India itself with the help of HAL(Hindustan Aeronautics Limited). So, the technology would be transferred from Dassault to HAL. This was important because if in the future, there would be any conflicts between France and India, India would still have the technology to make these aircraft.

March 2014 - A workshare agreement was signed by Dassault and HAL in which it was decided that 70% work would be done by HAL where 30% would be done by Dassault. There were still some disagreements going between the two companies. These negotiations kept on going for some time. Meanwhile, the ruling head of our government had changed.

25 March 2015 - Finally, the chairman of Dassault had declared that Dassault is ready to share and understand its responsibilities. This came into the picture after a long discussion with HAL on work sharing terms. He also said that 95% of the paperwork is done. The deal was almost ready to be finalized.

10 April 2015 - PM Narendra Modi made a visit to France and declared a new deal under which 36 Rafale Aircrafts were supposed to be bought from Dassault.

23 Sept 2016 - This new deal was signed and finalized by both the countries.

Controversies of The Rafale Deal

1. How did PM Modi propose this deal without discussing this with the committee?

2. What happened to the previous deal?

Offset Clause - It is an agreement between the buyer and seller, that the seller has to invest some of the share of buyer's money in the buyer's company. For example, if A buys a notebook from B for Rs.100. If this contract includes the 50% Offset clause, the B has to invest Rs.50 in A's company.

The new deal which was signed includes 50% Offset. The deal was signed for 58,000 crores. Now, Dassault was required to invest 50% of this amount.

3. Dassault has decided to invest Rs 21000 crores in Reliance Defence Limited. France President said that it was India's government who decided Reliance for the offset. However, Dassault chairman said that it was their decision to choose Reliance. Opposition parties suspected favoritism on the decision by NDA government. Also, they said how can a new company was chosen for this offset clause. Later, Dassault also said that it had invested money in 100 other Indian firms.

4. Earlier, the first deal (by UPA government) was signed for 126 aircraft at the rate of Rs 56,000 crores. But now, Rs 58000 crores would be given for 36 aircraft. The opposition asked for justification of this much difference. Defence Minister Nirmala Sitharaman has said that various weapons and equipment has been installed in these aircraft. Thus, the cost has gone so high. Revealing the breakdown of every system would be a threat to national security. A secret envelope was submitted to Supreme court justifying this cost. But, Supreme court has said that this is a very sensitive issue and it can not interfere in such issues which deal with national security.

Rafale Deal is still an ongoing controversy topic. Even the CAS Air Chief Marshal Birender Singh Dhanoa said that the breakdown of the types of equipment and technology used in Rafale aircraft cannot be disclosed. We should not compromise our national security with political conflicts. Sensitive issues on national security should be understood by both sides of the house.