One very important aspect of anyone's life is the ability to look inwards and consciously improve on several aspects of behavior. We also need to anchor some experiences in the organizational context. In this connection, the book "Triggers" by Marshall Goldsmith has a four-element Wheel of Change, which we can easily understand. ( page 91).

The graphic below, taken from the book, is illustrative. 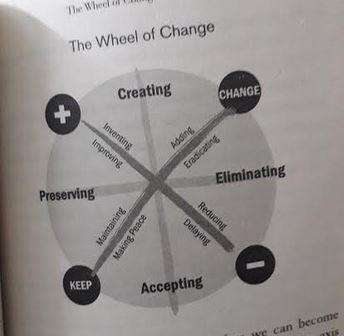 The author hits the nail squarely on the head, when he describes the four main elements involved in the wheel of change. They are Creating, Preserving, Eliminating and Accepting.

According to him, "Creating represents the positive elements that we want to create in our future".

"Preserving represents the positive elements that we want to keep in the future."

"Eliminating represents the negative elements that we want to eliminate in the future."

Relevance at the individual level

Let us take the first element called Creating. Should we not make a family that respects the values of the old times and then marries it with the imperatives of the present? Yes, we need to do this, urgently.

The reason is simple. In the metro and urban areas, in particular, the values among the younger generation is now undergoing a massive transformation. While the new assertiveness in welcome, the aggressiveness, and arrogance that comes along with it, is just not welcome. The kind of degradation of values is totally out of synchronization with the Indian family and its traditional quality of giving and taking. The elders have a huge role to play.

As far as preserving is concerned, we need to keep elements of our culture, that have huge implications for universal brotherhood, for happiness and peace and solidarity that cuts across religions. For example, the festival of Pongal in Tamil Nadu is often something that exceeds these values and is superb in terms of bringing about harmony at various levels. The interest shown by foreigners to participate in cultural activities has to be seen to be believed.

Needless to stress, each of us has a big role. The entire society can change if each of us takes a good deal of interest in all things that are good.

Relevance at the organizational level

Marshall Goldsmith does talk about this too. He gets the message across thus: "Creating is innovating, taking risks on new ventures, creating new profit centers within the company. Preserving is not losing sight of your core business. Eliminating is shutting down or selling off the businesses that no longer fit" ( page 97).

Now, let us turn to the hundreds of Indian examples. Yes, Corporate India is not lagging behind in innovation at all. For example, several years ago, the highly celebrated Indian multinational called ITC, ventured into a new business called "e-choupal". It deliberately co-opted the competence of farmers. In other words, the native intelligence of farmers was combined with the most advanced information technology that was put in place by ITC. The farmers lapped it up, more so, when they were assured that the entire village structure will not be disturbed. If ITC were to eliminate the middlemen, the social peace would be disturbed. Hence, the decision was taken to make the middlemen become a part of this change process. Today, e-choupal is a big reality in hundreds of villages and ITC is working to make it a real pan-India phenomenon. ITC has entered the biscuit industry and is doing so well. It has merely leveraged its strengths in marketing and manufacturing. It is a formidable player in the stationery business. Of late, it is entering into the ready-mix spices segment, with a huge specialization. For example, it has a "Tanjore sambar mix", catering to the traditional taste of a huge mass of people who hail from this particular district of Tamil Nadu but are well settled in different parts of India. What is most important is that ITC has identified different profit centers and has started milking them.

Indian organizations also need to understand how to listen to customers and their employees. In this connection, the Feedback loop described in an earlier article has huge implications.
Feedback-Loop-Pearls-of-Wisdom-from-the-Book-Triggers-by-Marshall-Goldsmith.aspx

BHEL has created several new businesses around its core strengths of engineering. It always communicates to the trade union leaders. In fact, its participative style of management is far better than most other Pulic Sector organizations, even today. It has never ventured beyond this core strength. Asian Paints is a highly focussed organization. So is the FMCG giant called Marico Industries which has in its portfolio, the famous Parachute brand of coconut oil. This is what is called preserving.

Yet again, eliminating has been happening too. For example, L&T sold its profitable cement business to the Aditya Birla group to concentrate on its core strengths in construction. That has been a very bold decision indeed. The Tatas have never hesitated to eliminate any business that is non-core. Decades ago, it sold its FMCG business to Hindustan Lever. ( Now Unilever).

Relevance at the societal level

If we as individuals raise our voice at any attempt made by some selfish politicians who want to sow hatred among religions, we would be impacting the society in a very good and positive way. We would be creating a new societal order.

Similarly, the solidarity with which we undertake any normal activity even after the deadliest terrorist attack is proof enough that we as Indians, want peace at any cost. It should be remembered that it was very poor people who mobilized all their meager resources to transport the bleeding victims of the deadly Bombay shooting by terrorists several years ago. That was a classic example of everyone trying to preserve basic human values.

Only individuals make a family, a society and a nation. If everyone participates in cleaning activities, for example, we would be creating a far better future for ourselves. In the city of Coimbatore, several publ.ic spirited individuals have taken up the good dead of cremating the poor victims of accidents or societal violence, who are either too old and orphans or those who cannot even afford the transport charges to the nearest cremation ground. The hundreds of student volunteers who do the running about and the organizing of the various activities has to be seen to be believed. This is preserving something that has been good for a long time. Examples of this sort abound. Environmentalists are now very active in teaching the local communities, the value of saving water resources, They are teaching them the modern methods of rainwater harvesting, judicious use of groundwater and so on. We are sure of creating a new society is such action can be multiplied all over.

Relevance at the intersection of the three levels

All of us need to accept that a lot more needs to be done by Indian organizations for society. Some organizations of the TVS and Tata group are indeed doing some commendable job. The other organizations need to replicate such efforts. So, in that sense, we will be creating a new order. New hope where millions will be gainfully employed. Several organizations are now networking with the hundreds of self-help groups that are now already in place, doing a variety of activities. For example, the need to educate their sons or daughters is felt across the nation. The Wipro group, for example, is involved through its Wipro foundation for educating hundreds of children in several States.

The individual employees are involved, the organizations are involved and there is involvement of the society as well. The concept of Corporate Social Responsibility (CSR) is a perfect example of this intersection of the rele4vance at the three levels, together. One does hope that we do see several such initiatives creating something new. By doing so, we would have preserved something good in our blood. We would have also eliminated the fissiparous tendencies that often tend to cloud such noble activities.

Marshall Goldsmith, in his masterpiece book called "Triggers" has many good messages. The wheel of Change is one of them. When we start understanding the different four elements, of this Wheel of Change, we will be able to understand its relevance to our own personal change and also how it impacts organizations and the society as well.