"Bohaag is neither a month nor a season; it is the life-line of the Assamese."
-Dr. Bhupen Hazarika

The above line from one of Dr. Hazarika's songs can give us an indication of the importance which the Assamese community has historically attached to the festival of Bohaag Bihu. What makes Bohaag Bihu so important for the Assamese? Why are the Assamese so spirited in celebrating this festival? Why do they wait with suppressed excitement and anticipation for the whole year to celebrate this particular festival?

Before starting our discussion, it might be useful to understand that Bihu is not a single festival, but a common name for three separate (but interlinked) festivals. These are Magh Bihu (celebrated at the same time as Makar Sankranti), Bohaag Bihu (celebrated at the same time as Baisakhi and which will be the main focus of this article) and Kaati Bihu (celebrated in mid-October). Magh Bihu is primarily a harvest festival. On the other hand, Kaati Bihu is a form of worship of Goddess Lakshmi to tide over the drier months which immediately follow this festival.

The significance of the festival

The significance of the Bohaag Bihu, on the other hand, is multifaceted. At one level, it is a celebration of the Assamese New Year. The Assamese calendar begins from the month of Bohaag (mid-April to mid-May) and ends with the month of Sot (derived from Sanskrit 'Chaitra'; mid-March to mid-April). The Bohaag Bihu thus symbolically indicates leaving aside the old and welcoming the New Year with open arms and celebration.

At another level, the festival is also related to the farming community. The Assamese people in rural areas have traditionally been a combination of farmers as well as pastoralists. They attach a great deal of importance to the cattle. In fact, the festival of Bohaag Bihu which was traditionally a seven-day affair has dedicated the first day to the cattle (Goru Bihu; Goru=Cow). Cows are washed in the riverside and are lightly struck with various herbs. The prevalent belief is that doing so creates resistance against diseases.

At still another level, the festival is a celebration of nature and the change of seasons. This is the time when winter gives way to spring. The dry, leafless branches of the trees now have new leaves on them. The flowers bloom in their full glory while the Koel mesmerizes its mate as well as all other listeners with its voice.

A season of love

How can this change of season remain detached from people's minds and hearts? For the Assamese pastoral and farming community, the majority of whom lead a year full of hardship and toil, the season is a rare occasion to celebrate and to have fun. Novels, such as Homen Borgohain's 'Pita Putra' offer us tantalizing glimpses of this period of celebration.

The youth, in particular, are amazingly energized during this festival. For many of them, this festival, during the height of spring is the one opportunity to confess their feelings to their sweethearts. These feelings are expressed, more often than not; through the beautifully composed songs (the songs themselves are sometimes called Bihu). These songs and the dances that accompany them are perhaps the most visible element, not just of Bihu, but perhaps, the whole of the Assamese culture. 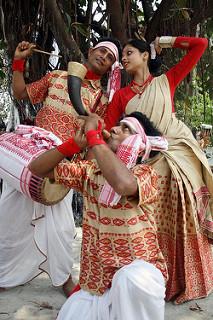 Long, long ago, before Bihu became the symbol of Assamese culture, it was censured and scoffed at by the Assamese gentry. The reason was the songs and dances that accompany the festival. Young girls and boys would escape out of the house, unnoticed by their families, during the dead of night and assemble in some pre-arranged open field, perhaps at the outskirts of the village. The sound of 'Dhol' (the Assamese percussion instrument, slung on the shoulder and played with the hands as well as a stick) and 'Pepa' (a wind instrument made of the horns of buffaloes) would break through the dead of night. Some of these older songs, which are now lost in the mists of time, were so excessively erotic that for several centuries the Assamese could never openly embrace the festival.

In the 1950s, through the efforts of a section of the Assamese elite, Bihu was taken from the secretive fields of villages to a more organized medium that is, the stage programs. Obviously, whatever content was unacceptable to the elites was deleted from the songs. Various competitions of Bihu songs and dance were held. This folk tradition got a new form and the gentry began to slowly, though reluctantly, accept the traditions of the village folk.

The Bihu festival has come a long way. The staged programs which are held nowadays have almost placed the original elements of the festival into the background. Into the foreground have emerged concert-like programs featuring famous artistes like Zubeen Garg. The festival is excessively commercialized. Although the celebration element is still there, the humble farmer or the simple feelings of the youth are not likely to be represented in these functions. This loss is perhaps the greatest one which the Assamese might have to bear. Obviously, I am not criticizing cultural change. Cultures are not static elements. They do change over time and with the action of new forces. But we also have to evaluate ourselves if the change is natural or is it inspired by some synthetic force of commercialism.

Be that as it may, the bottom line is that the festival which was once the object of censure is fast becoming the symbol of the Assamese community. One thing is important at this point. The Bihu festival was traditionally celebrated throughout the Brahmaputra valley. However, the Bihu songs and dances were celebrated only in the northern and eastern portion of the state. In the other parts, the focus was more on the cattle. However, the advent of television, as well as decades of patient work put in by artists like the late Khagen Mahanta, have led to the popularity of the songs and dances almost all throughout the state. In the more recent era, singers like Papon Mahanta have popularised these songs at the national level as well.

That concludes this article on one of the life-lines of the Assamese community. What form Bihu will take in the years and decades to come is another matter. But the values enshrined in Bihu, the celebration of nature, the feelings of love as well as the more worldly feelings of respecting the farming community should perhaps be cemented permanently. And yes, do remember to wish your Assamese friends a very happy Bohaag Bihu this month.

Essay topic: True beauty is on inside!

Are you looking for an essay on the topic True beauty is on inside? Feel free to download this article and use it as an essay or a speech for your school.

Dal Lake- a crown in the heavenly beauty of Srinagar

Are you looking for information about the Dal Lake, Tourist attractions near Dal Lake? Check this article to know more about the location, importance, how to reach and the places to see near and around Dal Lake in Kashmir.

Health and Beauty of Females by Sundari Sudha

It is nutritive for women and also provides strength.

This article describes about the various beauty tips for women. Learn to know about what all small things can be done to help improve overall beauty.

Glowing beauty even in summer

The scorching heat of the summer can be extremely harmful to our skin and it can snatch away the skin’s glow. What should be done to protect the skin from the harmful rays and return the natural glow?