This book Good News, Bad News, published in 1998, begins with the story of a disgraced reporter Janet Cooke, who worked for the Washington Post and was awarded the Pulitzer Prize in 1981for a news story titled "Jimmy's World". Jimmy was an eight-year-old drug addict and the news story was a narration of the events of Jimmy's life, which later was found to be fictional. Subsequently, the Pulitzer Prize awarded to her was withdrawn and Cooke had to resign. Cooke's case was grave misconduct in terms of journalism and a bright example to the readers about the importance of ethics in journalism. 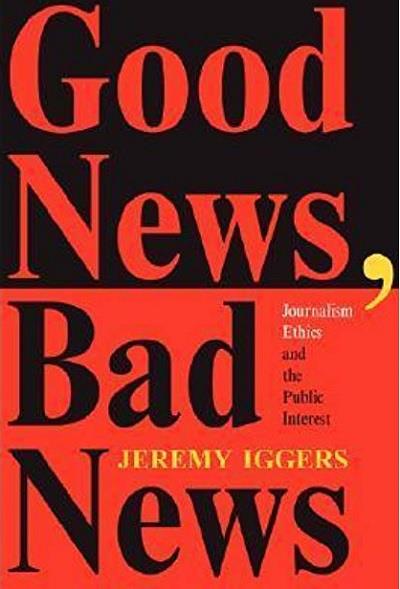 As the title indicates, this book tries to find out how journalism, mainly the American press, has shifted from earlier days and what the role journalism ethics play to decide the activities of the press. The author tries to find answers regarding the ethics of journalists, their accountabilities and the responsibilities of the press towards the citizen through different questions asked from various perspectives in all the eight chapters of the book. In almost every page of the book, you will find the comments of the press, eminent journalists, authors, social scientists and philosophers to validate the points of the author.

Jeremy Iggers is a journalist, philosopher and presently the publisher of GlobalTwinCities.com. At the time of writing this book, he was at Minneapolis-St. Paul Star Tribune as a staff writer and was also a restaurant critic. From the University of Minnesota, he earned a Ph.D in philosophy. He is also a foodie which is well understood from his writings on food. In 1996, his book, Garden of Eating won the Minnesota Book Award in the nonfiction category.

Why The Public Criticizing The Journalists

Is it all because the journalists are not living up to the expectations of the public? Journalists have a greater role towards the public and society and the news they publish shape the views of the public towards the administration and the happenings all around society. If the views are biased or one-sided which according to many critics are agendas of the ruling class then there will be discontent in the public. The critics accused the media of being "arrogant, cynical, scandal-minded and destructive". This book tries to have a look at these issues from various perspectives.

Is There Really Any Ethics Left

According to the author, journalism ethics resides mainly in theories and when it comes to practice the definition of ethics is quite ambiguous. Nowadays, journalism is market driven and most of the newspapers have shifted their focus from being the information bearer of the citizen to the service provider of the customer. It's like reporting things that customers prefer rather than reporting what has actually happened. In 1996, when the ethics committee of the Society of Professional Journalists (SPJ) revised the 'Code of Ethics' its president Steve Geimann said the Codes of Ethics is designed for individual journalists and not for any organisations. This Codes of Ethics should not be construed as a list of do's and don'ts; rather it should be treated as a set of guidelines to make the journalists accountable to their works.

It is interesting to note that the discussion about ethics takes place when there is any conflict or reported misconduct as with the case of Janet Cooke. The importance of ethics comes into existence may be to attack the rivals or to defend one's critics. For example, the grieving picture of a person or a family on the front page of a daily can evoke a pertinent question about intruding the privacy of people. Another case may be the reporting of personal/private lives of celebrities. On one hand, it is interference in the personal affairs of others and on the other many people like these reportings. The market-driven press is too concerned to publish things that people want to read rather reporting what has happened. They all are worried about profits in the competitive market and therefore in a dilemma when it comes to broadly define the theory of ethics.

The author tries to find out the objectivity and accountability of the journalists in different ways. Journalists interpret objectivity in two ways. One way is how accurately the actual things that have happened and the facts presented by the journalists match with each other. Another way is adhering to a set of procedures while reporting the cases. This can be termed as procedural objectivity. In the case of procedural objectivity, the reporter can always have an attitude of not taking the blame in case of misrepresentation of facts by saying that she/he has just followed the procedures while reporting. Take the case of a press conference by the government or a bulletin issued by different organizations. The reporter reports what is presented in those press conferences and bulletins, but it can always happen that the facts presented in those press releases are biased and have a specific agenda. Journalists must have greater autonomy in their work but can we blame the reporter who just reports what is presented to her/him? Then, where is the accountability of the journalist? Is the autonomy hampered in any way? The author tries to find all these answers and presented them lucidly with examples in the book.

In a democracy, the citizens must exercise their franchise in an informed way. There, the press has a great role to make the citizens informed. Journalists should strive to strengthen the views of the citizen and this can be done when they have a strong relationship with the citizens. Greater public participation through various debates and polls can have an impact and that has to be effectively done by the journalists. When citizens participate as active partners in the whole process, it can certainly solve many of their problems. Journalists should strive to enhance the life experience of its citizens through various means and then only they will gain a place in their mind. People's voice must be heard because journalism cannot survive without the public.