Memories of the days preceding Christmas, from when I was a child, are deeply entrenched in my mind, to an extent that I have to just close my eyes and everything flashes right through it. The vivid memories are so intense that I sense every minute detail, right from the biting cold of the Delhi nights, to the sounds of laughter and chatter and the aromatic food smells that filled my home.

There was a ritual followed at home, and everything happened in clockwise precision. There was a day assigned for the crib and decorations to go up. And a deadline to meet for soaking the fruits for the plum cake. Daddy would diligently chop the candied ginger and mixed peel and cherries, deseed the munakka and chop the almonds into fine pieces, while mummy put finishing touches to the sweaters, she was knitting for us, in between rustling dinner and finishing making those report cards.

My brother and I would join them at the dining table, in the veranda that also served as a dining room, playing a game of snakes and ladders, as the burning embers of coal in the angeethi kept us warm, oblivious to the happenings around us. However, unknown to me, every little frame was being captured in my mind's eye. I guess that's how memories are made – there is no conscious effort, but events somehow get etched in the mind and leave an indelible impression on. 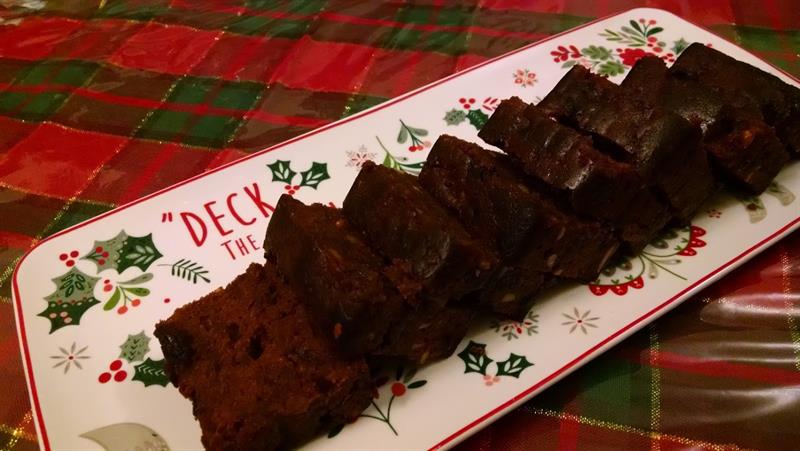 Years down the line and I am following the same practices. I enjoy doing what once seemed like a lot of work. My pre-Christmas rituals are an image of what my parents did. I happily take forward traditions and find it gratifying in an inexplicable way. Join me in making the most delectable plum cake. This rich fruit plum cake recipe has been in my mother's side of the family for generations. Everyone on my mother's side made the cake the same way.

I use glazed cherries, candied ginger, orange peel, munakka, black currants, assorted raisins and almonds. My daughter tweaked the traditional recipe and added cranberries, raspberries and blueberries to the plum cake she baked last year, in her London home. She covered it in a thick film of fondant. The results were awesome. 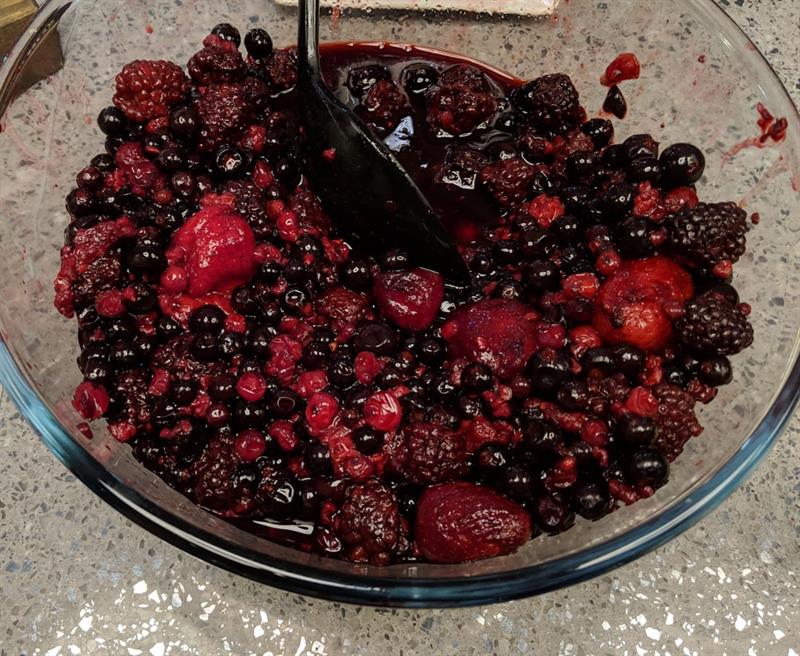 Christmas cake is also called plum cake or rich fruit cake. The preparation starts weeks, and maybe months in advance. A Christmas cake baked the traditional way is worth all the effort. It entails soaking of the fruits in liquor and baking it a few days before Christmas. This results in a rich, soft, dark and aromatic cake.

If heaven has a smell it must surely smell like my home during Christmas season. The aroma of the plum cake and plum pudding (will share a recipe of it in another post) lingers in my house for days, until the cake lasts.

Ingredients for the Plum cake

The preparation for the cake begins weeks, if not months in advance. You need to get the ingredients soaked at least 3 weeks in advance. Only then will the fruits soak in the liquor and release their flavours.

Take a large vessel, preferably glass or porcelain and one that has a lid. Into it tip the bottle of liquor and spice powder and mix well. I have been using Old Monk because that is what was used at home. Though, you could try whatever suits you. Add the chopped dried fruits, peels and nuts and mix them well, using a wooden ladle.

Cover and store in a dark, cool corner of your kitchen. The lid should sit firmly on the container because you don't want the liquid evaporating. Stir the mix, every second day, make sure to use a wooden ladle.

Ensure the mix does not dry out. You can add some more liquor to the mix if that happens. 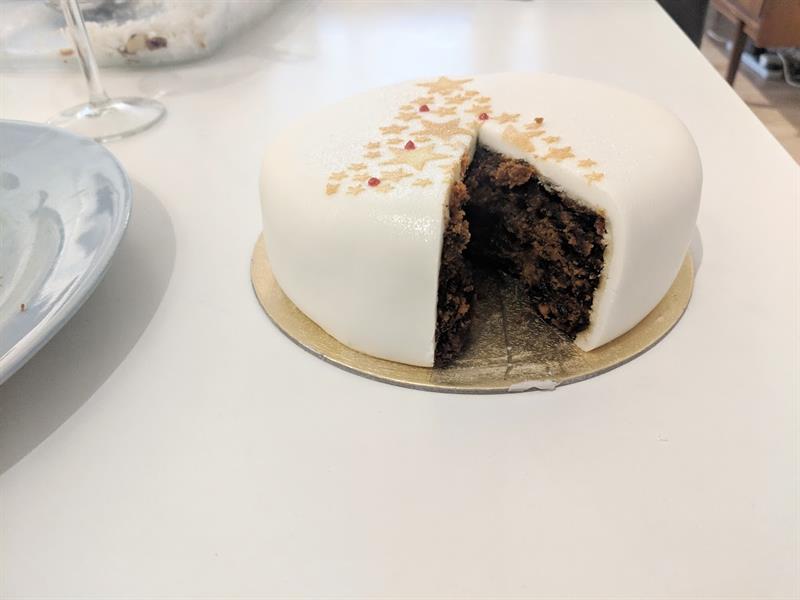 My parents got the cakes baked at the local bakery, but I do the cakes at home. Here is the procedure.

Line the cake tins with butter paper or parchment paper, such that the paper extends about 3 inches above the baking tin. Doing so allows the rising cake to remain confined.

Sieve the flour, baking powder and salt and set aside. Next sperate the egg whites and beat them until they are nice and stiff. Cream together butter and brown sugar, fold in the egg whites. Add the essence followed by the flour mix little by little and keep adding well-beaten egg yolks to the mixture, basically alternating between flour and yolk, until you get a nice homogenised mixture. Now add in the caramelised sugar along with the soaked fruits. You need to fold these in, rather than mixing them.

Preheat the oven at 150°c. You need to keep the setting low because the cake needs to be baked for a longer duration at low heat. This is not a regular cake it is loaded with fruits and liquor which will burn easily if the temperature is set high. The chance of the edges getting baked and the centre remaining undercooked increases when the temperature is too high.

Spoon the cake batter into the cake tins, give the tins a tap, to release the air pockets and set the cakes to bake for approximately 2 ½ hours. Set the timer for two hours, and check if the cakes are done, by inserting a toothpick or knife down the middle. The cakes are done if they come out clean. Bake a little longer if not. 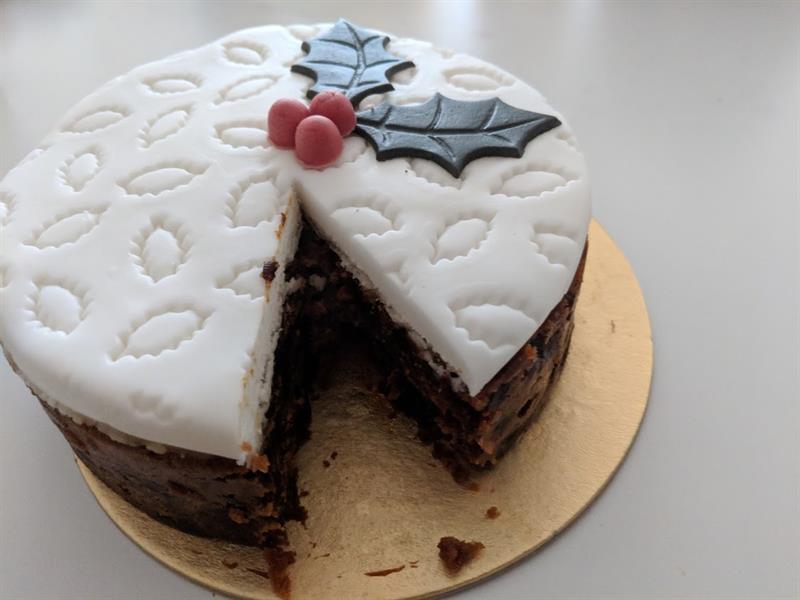 Once the cakes are baked, remove them from the oven. Allow them to cool before you remove them from the tin. The cakes stay good for a month, just keep them in a cool, dark place, away from ants and cockroaches. There is no need to refrigerate the cakes. You may think of doing that only if the weather is unbearably warm. I have never refrigerated plum cakes nor seen anyone do so. Don't remove the butter paper, while storing the cakes.

Traditional Christmas cake recipes call for alcohol. It is what gives the cake a dark, soft and moist texture and distinctive aromatic flavour. I have had Christmas cake baked the traditional way, ever since I can remember. And I didn't turn into an alcoholic nor did I ever get drunk.

The alcohol actually evaporates when the cake is baked and does not leave its effect behind.

I have had Christmas cakes where the fruits were soaked in a combination of orange juice homemade jam, instead of alcohol. That works too, but if you choose to use the juice and jam combo you will need to soak the fruits for just 48 hours, not longer. The cake doesn't taste the same as its traditional version but is definitely passable.

Can tutti-frutti be added to plum cake?

The answer to that is a resounding NO. You just add real dry fruits and nuts, as mentioned in the list of ingredients and berries, like I said my daughter used. Some people add walnuts, but I don't like the taste and stick to just almonds.

How much fruit for a plum cake?


How to caramelise sugar?

Pour white sugar in a non-stick pan and heat at high flame. Do not stir the sugar, just allow it to sit on the flame. The sugar will begin to melt, in about 5 minutes. Once the sugar melts completely, allow it to turn brown, and when it reaches a nice dark brown colour (the colour of coffee powder) pour a cup of water to it and stir. Doing so prevents the sugar from crystallising.

What is the spice powder used in recipe?

Can you use fewer eggs?

Yes, you can, but I use one and a half dozen, the way mom's recipe demands. This is a traditional recipe, so I won't suggest an eggless variant. However, if you have a way of making this eggless, do leave your suggestions in the comments section.

More articles: How to How to

A very detailed, interesting and elaborate recipe of Christmas cake. I have an interest in cooking and in addition to other dishes, I usually prepare cakes also from time to time. Though I have used many ingredients but have not used cherries, dried apricot or almonds. Next time let me try that for the said flavour. Cakes are the much-demanded items at the time of birthdays, anniversaries and other functions and we can go for such a delicacy on those occasions too.

Thank you for your appreciation.

Christmas Cake is a speciality and every family has its own secret recipe. The preparation starts weeks ahead and actually rings in, the beginning of the season. Christmas cakes, when made the traditional way, can stay good for months on end.

The fruit for traditional wedding cakes are also soaked in alcohol, but they are soaked for a much longer duration of up to six months. And the quantity of fruits is much more than what is added to the Christmas Cake. The cakes turn out dense and stay good for a year. The cake is so dense that it can support the top tiers without caving in.

The bottom-most tier of my wedding cake was stored for my first wedding anniversary. It was perfectly fine and had 'matured' during that time.

Thanks for the additional details. It is really interesting to note that cakes can be preserved and last so long without going stale or anything like that. Probably the soaking of fruits in the alcohol and cooking the cake a bit more are the tricks doing that and this is really a good piece of information for the enthusiastic cake bakers.

Yes, soaking the fruits in alcohol does the trick. Another thing that works in favour of the cake is its high sugar content. The sugar in the cake prevents microbes from multiplying. The cake is also very dense, and that is another factor that keeps it from getting spoilt.